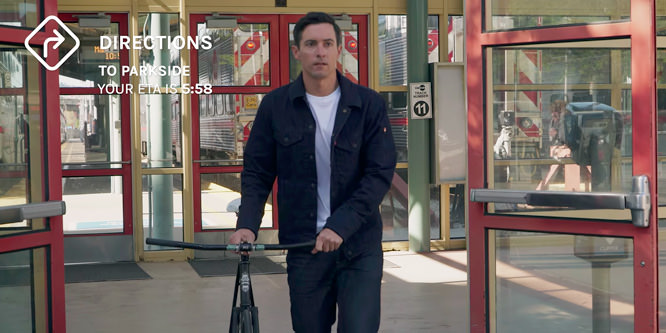 A year or two ago, the tech world was convinced of a coming wearable revolution that would be on par with the leap from desktop computing to mobile. Things haven’t materialized that way. But despite the failure of some wearables to catch on, some once-popular ones plateauing and others falling completely out of fashion, Google hasn’t given up on the idea.

Google and Levi’s debuted a “smart jean jacket” at SXSW earlier in the month, according to The Washington Post. The jacket, which will hit retail shelves in the fall, is targeted at bicycle commuters and allows wearers to answer phone calls, get directions and the like through their headphones merely by tapping their sleeves. The jacket has electronic “smart fibers” woven throughout and is washable when the control-cufflink is removed. It will retail for $350.

Google’s previous effort in wearable devices represents one of the technology’s biggest cautionary tales. Google Glass, the company’s web-enabled glasses, experienced a backlash that made users the object of widespread mockery. Glass has reportedly since seen some success in medical environments. And while Snap is now betting on the idea of a Glass-like device, it’s too early to say if Snap Spectacles are destined for widespread adoption.

Other wearables from other companies were bigger hits than Glass, but still somewhat flash-in-the-pan. Apple Watch, while it had a good quarter recently, remains a niche product. And even the big wearable success story, FitBit, is not seeing the sales it once did.

The Levi/Google collaboration could be unique, however, in that, unlike its progenitors, it is fashionable first, then functional. For people already in the market for a jean jacket it might not be much of a leap to upgrade to one with functional bells and whistles, even though the wearable could raise questions of durability and safety.

Retailers have also joined in the search for the wearable device that sticks. Last year British apparel retailer Topshop began a startup incubator to find and facilitate the release of the next big wearable.

DISCUSSION QUESTIONS: Do you expect the Levi’s/Google smart jacket to see widespread adoption among its target audience of bike commuters? What will determine if technology embedded in clothing is a hit in the consumer market?

Please practice The RetailWire Golden Rule when submitting your comments.
Braintrust
"Levi’s/Google need to think about having a few different 'fashionable' models of similar jackets."

"Success in wearables is all about the “right” application and I don’t think this is it."

"The jacket not only gets PR headlines, but they’ll get a chance to measure actual consumer interest."

I love the idea of wearables, but a jean jacket for $350 is way beyond what I’d want to pay. In order to succeed with consumers wearables must be priced comparably to ordinary fashion and offer functionality that makes life interesting.

It’s interesting … especially if they can use the physical real estate to put a larger battery in it.

Wearables must first be fashionable, then functional. And the functions have to offer a significantly better user experience. As voice interface advances, I am skeptical of the value of touch interfaces, even on wearables, to provide a quantum leap of value.

Remember that this is fashion. Fads come and go. The pace is quicker than just a new technology that might take time to gain adoption. The fact that it is something you need (a jacket), and is truly helpful (not just fanciful), means it has more potential for liftoff. Also, it is not obvious — like Google Glass was. So it might avoid the negative backlash.

Levi’s/Google need to think about having a few different “fashionable” models of similar jackets. Not everyone who is a tech adopter/cyclist will appreciate the exact same look and feel. It has to be fashionable/comfortable/practical — first. Tech considerations must come second. Otherwise it will be relegated to being another niche product for us geeks.

In a word, no. With voice recognition where it is today, a headset and voice commands can give the biker what they need and for far less than $350. Success in wearables is all about the “right” application and I don’t think this is it.

Wearable tech/fashion has been difficult to sustain beyond a temporary fad because it’s not fashionable enough for those that care about fashion nor is it tech enough for those who love tech. Between the two groups, since tech is supposed to be the highlight of these new wearables, I’d pick the tech group to focus on first. It’s much easier dressing up a technology to suit a wider market once the technology has been accepted than the other way around.

Great idea, but I’m skeptical. We have to compare the price point of this new item with a non-tech based Levi’s jacket and ask if the price-premium will seem justified to the target audience of bicyclists. I’m not convinced that most of them won’t be better served with a good pair of Bluetooth headphones and their existing smartphone (or other smart wearable like a smartwatch).

For the fashion-forward early adopters of technological innovations, especially in NYC, this is the product for you! A Levi’s and Google collaboration certainly helps to boost the Levi’s brand and keeps them relevant and unique. Levi’s has done a solid job of retaining their relevancy throughout the last 150+ years, especially with their experimental and entrepreneurial moves in the past few years as seen here and here.

However, the initial value proposition may not be there with a $350 price tag for a smart jacket. Perhaps this concept will take off once the economies of scale are achieved and the price range is in the ballpark for the masses. It’s all a matter of time before wearables take off.

While clever and innovative the widespread adoption is highly unlikely. The entire category is in its infancy. Levi’s and Google are giving us a glimpse into the future. I suspect this is another opportunity for valued press coverage rather than a sound business decision based on units sold. These announcements keep consumers’ imagination and attention — “Did you see what Google and Levi’s are doing?!” Why get lost in the mix at either CES or SXSW when you can grab the headlines exclusively?

It is early days for wearables and testing the water is necessary at this stage. The jacket not only gets PR headlines, but they’ll get a chance to measure actual consumer interest. Market feedback is invaluable in understanding the complex puzzle of how fashion, tech and the economics of what will make sense come together.

I love that both Google and Levis are innovating and trying new ideas. It’s only by pushing the boundaries we actually invent the future. The one worry I have, however, is the way this particular innovation is being marketed.

From my own experience of cycling in London, for which you need full concentration and a Jedi-like sense of what is happening around you, do we really want riders distracted by vibrating/speaking jackets? I wonder if the innovation has overshadowed the practical usability in this case.

The form, function and fashion must all be in sync. So as a commuter bike rider, which appears to be the target audience for this product, is a jean jacket an essential piece of equipment? No. I’m a big believer in the potential of wearables, but this form (jean jacket) doesn’t really fit the use case here.

What a shame that April 1st is on Saturday this year, cuz what a story this would have made! Or is it really true? Answering the phone is the last thing in the world a bicycle rider needs to do, and if this is where “wearable” technology is headed, then I’ve lost whatever interest and hope I had for it (which was pretty small to begin with).

Yes it has to be functional and I question the functionality of this because of the cost. $350.00 is expensive for a jacket that can only be worn when the seasonal weather allows for it. Certainly not mid winter when it is too cold, or mid summer when it is too hot. I like the thought process. But this product has a limited value to a limited few.

Wearables can only be viable if retail-orientated. Apple Watch is successful because of Apple Pay integration for the checkout. Another successful wearable is bPay by Barclays in the UK which features watches, Key Fob and RFID sticker. Suica in Japan embedded chips into wearables that conduct transactions at the subway as well as QSR for years.

The best use case for wearables is to conduct transactions and the best wearable model is accessories, not apparel. Google + Levi is not viable and more proof Google does not get it when it comes to retail tech. It would have been better to just partner with local dry cleaners/alterations by offering a “kit” to install this wearable in men’s and women’s existing wear for faster scalability and to promote local businesses.

It’s interesting to see how the predictions for the future of technology pan out. Years ago, it was predictions for flying cars by 2000. For the past few years it’s been self-driving cars and wearables. Here we are in 2017 with a few auto pilots and a struggling wearable market. I believe the Levi’s/Google jacket to be a step towards improving wearables, but I don’t see it becoming the next big thing or widely adopted. Their solution is an interesting way to circumvent the difficulties with using voice commands while biking. Personally, I just don’t see the practicality of spending that much on a jacket for the mentioned functionalities.

This is a solution looking for a problem. It is niche-based, and is competing with wireless headphones to solve a problem that really isn’t there, let alone at a cost of $350. Also, just because it is made by Levi’s doesn’t guarantee that it is fashionable, or that people will buy it. Fashion is fickle that way.

Braintrust
"Levi’s/Google need to think about having a few different 'fashionable' models of similar jackets."

"Success in wearables is all about the “right” application and I don’t think this is it."

"The jacket not only gets PR headlines, but they’ll get a chance to measure actual consumer interest."