Will Hudson be more than just a newsstand with a new look? 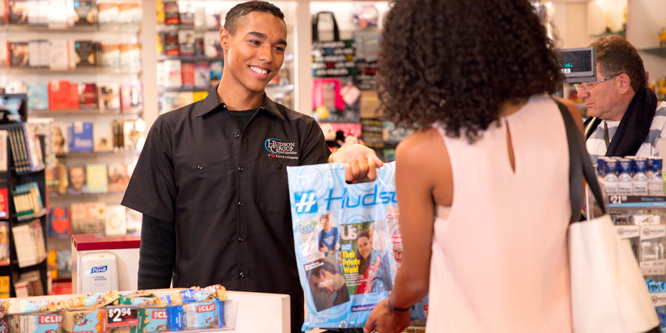 Travel hub mainstay Hudson is the latest retail chain to rethink its look and feel to meet the needs of contemporary customers.

A revamped store layout being launched in key markets in 2020 will feature digital displays which show localized content controlled by the chain’s corporate team. Through the use of interchangeable modular walls, locations will be able to easily reorganize each store to highlight certain products or implement special seasonal displays.

Brian Quinn, EVP and COO, said in a statement, “Our refreshed design concept will grab customers at the door and draw them all the way into the back of the store — giving us the opportunity to customize each store to make it more enticing to travelers and profitable for our travel-hub partners.”

Hudson is also adding self-check-out stations for greater shopper convenience. In mid-2020, the chain will introduce a new app that will allow travelers to connect to a nearby Hudson store from their smartphone and gather insight on products and promotions.

Despite its major presence across major airports and transport terminals, Hudson is facing down a potential wave of disruption from retailers, cutting-edge tech players and even grocers. For instance, reports late last year indicated Amazon was looking at placing its cashier-free Amazon Go concept in airports, where time is often at a premium for travelers.

In Europe, Ahold Delhaize has been piloting a small, modular Amazon Go-like store location which it recently relocated to Amsterdam’s Schiphol Airport, according to Supermarket News.

In the U.S., commuters in larger cities may soon begin expecting higher-end retail experiences in big train stations during their daily travel. In New York City, the MTA recently announced plans to revamp three Manhattan transit hubs, according to the Wall Street Journal. The planned improvements will bring them up to speed with retail-heavy hubs like Grand Central Terminal.

DISCUSSION QUESTIONS: Will Hudson succeed in bringing in more customers with its next-generation store? What are today’s travelers looking for in localized content, store layout and services from travel essentials shops such as Hudson?

Please practice The RetailWire Golden Rule when submitting your comments.
Braintrust
"If they can get me to stay to see more, I am all for it -- if I see there is value added for the customer."

"A stunning new sales floor, combined with interesting new merchandise that goes beyond the definition of convenience, will make Hudson stores a stand-out."

"A new look is short-lived but if they’re backing it up with new technology to enhance the experience, there’s a much better chance they’ll sustain interest."

14 Comments on "Will Hudson be more than just a newsstand with a new look?"

Whether good or bad, I have always considered Hudson News stores to be c-stores in airports where I get some mints or water for a trip in and out. If they can get me to stay to see more, I am all for it — if I see there is value added for the customer.

I’m assuming Hudson knows more than I do, although I’m working on my third million miles on Delta so I’m a semi-expert on airports. Yes, they should be fine-tuning their stores all the time, so good for them. But I’m not going there for local stuff – I’m going for travel needs or a snack for the plane, something to read, and maybe a souvenir. They are a news agent, not an upscale retailer, and trying to be the latter will kill them. Their assortment is limited and analysis shouldn’t be that hard to show what sells in each airport. Figure that out and make the stores look a little less crowded. And I don’t need an app for them.

I agree. I spend a reasonable amount of time in airports but I am certainly not a frequent Hudson shopper. When I do shop them I am not looking for more than one or two items with national brand recognition.

I am most intrigued by the new app that will allow travelers to connect to the local stores for product and promo information. I think airport retail has a ton of untapped potential to streamline the shopping process and to increase revenues through greater speed, convenience and personalization – possibly even gate delivery.

Hudson sells EVERYTHING. The face most people see is a store selling magazines and bottled water, but they also manage numerous luxury stores in international airports. It’s only natural for them to look at new ways to engage customers and streamline operations. They have a terrific team and are doing exciting things.

Hudson is the go-to airport store because it has what a traveler needs before boarding their flight. But that’s about it. Other than convenience store basics the merchandise selection is pretty limited. You want a gift to bring to your kids? Here’s a snow globe.

There are so many stores at airports these days that are filled with product that makes them browse-worthy. A stunning new sales floor, combined with interesting new merchandise that goes beyond the definition of convenience, will make Hudson stores a stand-out.

An old model with low ATVs in a high potential retail environment needs more than a new look. I stopped in a Hudson two weeks ago and couldn’t even tap to pay with NFC/Apple Wallet. Rifling through my bag post security to grab a card for a $4 bottle of water isn’t ideal.

It is great to see Hudson looking to keep pace with other forward-thinking in-airport travel retailers. Localized offerings have worked well with foodservice operators, so it will be interesting to see how well passengers embrace and interact with localized, digital retail content. Anything that nurtures engagement, experience and convenience has a high likelihood of customer adoption and satisfaction.

Like many here on RetailWire I have millions more air miles than I like to think about and frankly, Hudson’s relevancy has declined over the years for me as both an individual and a traveler. Is there a market for “local inventory”? Sure, I guess, but I can already buy enough “Detroit vs. Everybody” gear to clothe a small city at the airport. So local merchandise isn’t the answer. If I were Hudson I might look at significantly reducing store size in certain airports. People travel differently than they used to. Their luggage, i.e. backpacks, doesn’t have room for all the goodies Boomer travelers use to bring home to their kids who … by the way … want screens, not snow globes made in China. And Matthew is right about the general upgrading of airport retail. Color me skeptical.

Adding digital displays to engage with customers and promote products is a good thing, but it won’t bring me into the store. I rarely go into these newsstand stores and it is just for specific items (a quick beverage or snack). The key for Hudson is to make the stores more inviting to people walking by. Usually they are very crowded and I walk by because I don’t have time to wait.

Making the stores more inviting with fast checkout is key. It is all about convenience!

A new look is short-lived but if they’re backing it up with new technology to enhance the experience, there’s a much better chance they’ll sustain interest. There are starting to be enough great customer experiences out there that it’s becoming cost of entry to keep up.

Hudson has a built-in audience with travelers in airports. They shop out of need — and to kill time. That said, travelers (customers in general) consume content, as in news and books, on their mobile devices. Hudson must have the merchandise that customers want to buy. Sounds like Retail 101, but it’s all about keeping up to date with changing buyer expectations, habits, etc.

Hudson boomed in an era when unifying nationally was good. But now the best airports have far more variety in their shopping. Corporately driven “local walls” won’t be enough to compete against the vitality and variety found in great airports today.

The most powerful part of the announcement are self-checkout stations. Up against Amazon Go, self-checkout is plenty. There is significant consumer hassle with Amazon Go (apps, etc) which will frustrate frequent travelers while the simplicity of self-checkout will win without question.

The rest of the items seem to be designed to fit neatly into the accepted narrative investors want to hear — and that’s always a bad sign because it indicates a lack of clear insight into their own business.

I usually find myself in two different situations at airports, 1) extremely time-crunched and hungry, looking for a drink or a snack or 2) having too much free time, walking into the store to find a book, magazine or time to browse. The announcement from Hudson shared many interesting features of the new store, but did not ring as customer-centric or focused. It would be nice to hear why they are moving to more self-checkouts. Will they shift some of their employees to be away from the counter to better serve their customers? Additionally, what did they learn from the pilot store program about their customers that will help them better serve customers going forward? As a leader in the industry, trying to get the customers to the back of the store is not the ultimate goal. They need to strive to be top of mind for travellers and considered the top choice for key travel categories. I think that the app may provide a way to build further loyalty and receive more timely feedback… Read more »
0
|
0
-   Share

Braintrust
"If they can get me to stay to see more, I am all for it -- if I see there is value added for the customer."

"A stunning new sales floor, combined with interesting new merchandise that goes beyond the definition of convenience, will make Hudson stores a stand-out."

"A new look is short-lived but if they’re backing it up with new technology to enhance the experience, there’s a much better chance they’ll sustain interest."