Will L.L.Bean find success in Canada where others have failed? 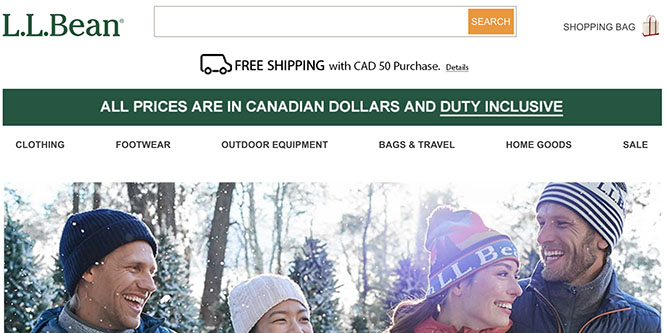 L.L.Bean has formed a partnership with Toronto-based Jaytex Group to make its first expansion into Canada. The partnership includes wholesale distribution, a dedicated website and stores.

In spring 2019, Jaytex’s L.L.Bean range will be expanded to include outerwear, footwear and accessories. In fall 2019, the opening of Canada’s first L.L.Bean store is anticipated through Jaytex. The goal is 20 stores across Canada within 10 years, according to an Associated Press report.

“We’ve historically had an active and loyal customer base in Canada,” said Steve Smith, president and CEO of L.L.Bean, in a statement. “Developing a true omnichannel presence including a wholesale component, as well as new brick and mortar retail stores and a dedicated Canadian website will give our Canadian customers a better overall L.L.Bean experience and make it much easier to shop in the channel that’s most conducive for them.”

Jaytex is 40-year-old Canadian distributor of outerwear and apparel and currently works with Ben Sherman, Free Country, U.S. Polo Association and Lily Pulitzer as well as a number of swimwear brands.

L.L.Bean operates 43 stores in the U.S. as well as 28 stores and a dedicated website in Japan.

The opening comes in recent memory of Target shuttering all 133 stores it had opened in Canada. During its time there, consumers complained of out-of-stocks and products priced higher than in Target’s U.S. stores. Other that have struggled expanding into Canada include Best Buy, Big Lots, Sony and Staples.

Walmart, Costco, Cabela’s and Tiffany’s are some U.S. retailers finding success in Canada. Lowe’s, which acquired Rona in 2016, announced yesterday that it is closing 27 of the chain’s stores in Canada as well as four others under its namesake banner.

DISCUSSION QUESTIONS: Does it make sense for L.L.Bean to partner with Jaytex Group on its expansion into Canada? Does it also make sense to include a wholesale component even though the brand doesn’t sell through third-party retailers in the U.S.?

Please practice The RetailWire Golden Rule when submitting your comments.
Braintrust
"Great to see expansion starting on the right footing (taking an omnichannel approach from the outset)."

"I’m not sure even the buffering that the Canadian Jaytex Group will provide to L.L.Bean will do it. Few U.S. companies will ever truly get it; get the uniqueness of “Canadian."

"L.L.Bean’s main expansion opportunities lie elsewhere, including in Japan where it is doing well."

10 Comments on "Will L.L.Bean find success in Canada where others have failed?"

Expanding into Canada won’t hurt, but I doubt that it will be a big win for L.L.Bean. The brand has been around for 100 years, and the die-hard Canadian fans have been buying L.L.Bean products direct, online and in U.S. stores for decades, so I doubt that there’s a huge pent-up demand. This all said, I think partnering with Jaytex, first to distribute L.L.Bean product through existing retailers and then to expand to their own stores, is a typically Canadian cautious and conservative approach.

This is a sound move, but not a revolutionary one. It is not as if L.L.Bean isn’t already available in Canada, this just formalizes the online buying process in terms of having a dedicated Canadian site. Distributing via third-party retailers is sensible and may provide some uplift in a cost-effective way that minimizes risk. All that said, L.L.Bean’s main expansion opportunities lie elsewhere, including in Japan where it is doing well.

Yes, it completely makes sense to partner with a group that is already operating stores (online and physical) in-country. It is also a smart approach to ease into the market by introducing products through the existing retail stores. A soft start of sorts.

As for the wholesale component, this definitely raises questions. This would make sense for a brand that Canadians don’t know. However, to Mark’s point, L.L.Bean is well known in Canada. Wholesale offers suggest selling the L.L.Bean products more broadly. This might be a good approach for reach into physical locations beyond the 20 planned L.L.Bean stores. However, the caution is NOT to dilute the brand. If it becomes ubiquitous, then it also loses its value.

Great to see expansion starting on the right footing (taking an omnichannel approach from the outset).

I’m not sure even the buffering that the Canadian Jaytex Group will provide to L.L.Bean will do it. Few U.S. companies will ever truly get it; get the uniqueness of “Canadian.” Weaving “L.L.Bean” into a tuque is mere condescension. I have both citizenships and have been very happy living in Arizona for 20 years. But I’ve never understood the American mindset that this country is the best in the world at absolutely everything. There are many pluses, but that simply isn’t true, not by a longshot. The disconnect with so many expansions into the Canadian market culture is the very notion of “expansion” as though the entire continent is one experience. The magic key, I think, is for U.S. companies to do something different in Canada that isn’t done in the U.S.

Yes, the Walmarts and Costcos seem to have pulled it off. I swear Costco is successful in Canada because they serve poutine!

In new markets (and as Neil stated) this is hardly a revolutionary move. Depending on the terms of the partnership, there’s usually a clever out for L.L.Bean to buy back the infrastructure (license, stores, e-commerce, product etc.) depending on the success and viability of the model. Just like Pandora, Furla (APAC), etc.

What most retailers seem to forget is that the population of Canada is only 36 million people — one-half of which are actual shoppers. I.E., the size of the NYC metro area spread out over thousands of miles of frozen tundra. About half of that population is in Ontario alone. The point is, “expansion into Canada” is not going to be some kind of revenue boom. It sounds goo, but, in reality, name a retailer in the U.S. that has really made it big up there. Five good stores? Six? Ten tops — so what?

Selling wholesale up there makes more sense, but I wouldn’t bet on huge benefits from that either. Canadians are pretty indigenous when it comes to the great outdoors. Also, I’m not sure what the newly negotiated NAFTA did to apparel and shoes, but that might not be very kind either. At the end of the day, this is a pretty big “meh” to me.

Distribution is a smart move to make L.L.Bean’s quality goods accessible at reasonable cost to the small sporting goods merchants and outfitters that continue to serve the rural and northern parts of the country, where the real sporting, hunting, and fishing takes place. Canada Post’s delivery chops are nowhere near what American commentators are used to with USPS, especially outside the urban cores, so L.L.Bean can’t depend on just a website and mailings to get the job done with those customers who’ll use their products most intensively — they have to use a multichannel approach.

Having lived in Canada, and run an American retail company in Canada, one of the most important goals must include relevance to the marketplace in Canada with pricing, assortment and physical location while still being true to the L.L.Bean brand. As many have said, the population is roughly 10 percent of the U.S. and 90 percent of that lives along the border. Twenty locations, unless they are much smaller, is very aggressive. The value of the direct marketing in driving both store and online traffic should not be dismissed. It’s complicated but not impossible.

Partnering with a partner like Jaytex Group, enables L.L.Bean to accelerate their expansion into Canada, getting their products exposed to more people by leveraging existing sporting goods and outdoor clothing retailers. L.L.Bean has some brand recognition and loyal customers in Canada, but is hasn’t been easily accessible. The migration to Freeport is a summer excursion for many Canadians. The products truly resonate with the people, the climate and the joie de vivre of the Canadian customer.

With more in-store availability at existing retailers, future L.L.Bean stores and a Canadian website, L.L.Bean should be successful in Canada. Now more Canadians can enjoy the Bean Boot!

L.L.Bean is primarily a catalog retailer, or at least that’s a big part of its operation. I don’t have the specific breakdown, so comparisons to someone like Target make little if any sense (at least to me) since Canadians have likely been shopping “there” for years. It’s a well-known and respected retailer and its forte is outdoor-wear for cold places … what marriage could be more natural?

Braintrust
"Great to see expansion starting on the right footing (taking an omnichannel approach from the outset)."

"I’m not sure even the buffering that the Canadian Jaytex Group will provide to L.L.Bean will do it. Few U.S. companies will ever truly get it; get the uniqueness of “Canadian."

"L.L.Bean’s main expansion opportunities lie elsewhere, including in Japan where it is doing well."