Will miniature Meijers be a big hit? 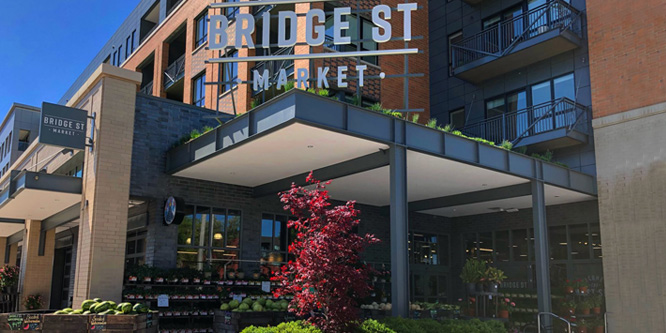 In the last few years, a wave of national grocers have experimented with small concept stores to break into urban environments and, as the strategy is proving successful for retailers like Target, regional grocers are following suit. Now one of the biggest names in Midwest grocery has announced the launch of a second small concept store in one of its major Michigan markets.

Meijer announced plans to open its new store early next year in Royal Oak, MI, according to the Detroit Free Press. Described as a neighborhood market-style location with an open, airy layout, the 40,000-square-foot store will be called Woodward Corner Market by Meijer. The assortment will include products from 2,000 local artisans, featuring popular regional favorites like the Ann Arbor-based Zingerman’s bakery. The store will be located in a pedestrian-friendly area and will have a coffee shop and an outdoor fresh produce and floral section.

Meijer is renowned for being a pioneer in supercenter grocery and in “one-stop shopping,” but has been shaking up its suburb-oriented formula as it works to remain competitive in today’s grocery landscape.

Dipping its toe into small concepts is not the only move Meijer has made to get more contemporary. A few years ago, the chain began what it called an “aggressive push” into redesigning its large format stores in key markets with more modern layouts, according to Produce Retailer. By 2017 it had remodeled about a quarter of its stores.

Meijer has been pursuing upgrades on the technological level as well. Last year after a successful six-store pilot, the chain announced the broad rollout of a shop and scan smartphone app that can be used in all 235 of its locations. Such technology has grown popular with Meijer’s national rivals like Walmart and Kroger as grocers work to streamline the checkout process.

In 2017, Meijer revamped its IT operations, migrating from in-house infrastructure to a third-party cloud tech vendor leveraging the cloud.

DISCUSSION QUESTIONS: Will launching small, urban, hyperlocal store concepts be as important for regional superstore retailers like Meijer as it is for major chains like Target? What are the keys for retailers such as Meijer when it comes to making small stores work?

Please practice The RetailWire Golden Rule when submitting your comments.
Braintrust
"I love the focus on local artisans and regional suppliers, fresh florals and produce in a walking community. "

"It’s the giant supermarket shifting to become a specialty retailer — and that’s not a walk in the park."

"I like the fact that the company invested in updating their IT operations and offers a shop and scan smartphone app."

15 Comments on "Will miniature Meijers be a big hit?"

Small formats are becoming more important, mainly because shopping habits are changing and moving away from big, infrequent shops. However, making small formats work is hard. The economics on small locations are not always as good and the dynamics can be very different from larger locations. The worst small formats are those which are virtually slimmed down versions of large stores. This rarely cuts it. Small formats have to be designed and focused on local needs and different shopping patterns.

Meijer superstores can feel overwhelming compared to typical Target stores, but the scale of their grocery business is much bigger. My impression from shopping a nearby store is that the food departments are consistently busy, but the “general merchandise” traffic is pretty underwhelming. Meanwhile, the neighboring Target has the opposite problem — plenty of traffic in apparel, home and commodities but not much traction in groceries.

Meijer certainly has the credibility in its home markets to open food-only stores, but it faces plenty of competition. It might study Walmart’s history in this area — why did the company’s small-format food-only locations fail to gain traction despite the size of its overall grocery sales?

I see smaller stores in the future for all retailers. Eventually, online and in-store will become one — meaning the customer will know what he or she wants and when to purchase online or go to the store. Considering that most if not all items can be purchased online, the store of the future will be the place to browse, see and try things but most often not make the purchase at store level because delivery will continue to get faster so the item will be there most likely by the time the consumer gets home. Technology is changing the world at a rapid pace, and as the evolution of retail continues we will see more changes both online and at the store level. The journey is exciting and already becoming a fantastic progression to watch.

As a former Grand Rapids resident, it was an easy 15-20 minute drive out of the city to get to meaningful shopping. This was also prior to the delivery and fulfillment age we live in now. Miniature Meijers and Targets fulfill a huge customer need in cities where population growth is steadily increasing.

Meijer enjoys a solid reputation in its trading areas. So its brand will create awareness for its small store concept. Success will depend on two things: One, is the urban store filling a need in the area and two, will the urban store compete against strong entrenched food stores?

Target has proven the concept works, so now it’s a function of other retailers finding their footing, both in content and shopping experience. Smaller by definition is going to mean edited assortments, so skill in the editing process is key. The temptation to over-assort never seems to go away.

A few features of this second small format, neighborhood grocery store concept from Meijer are very appealing to me. I like the fact that the company invested in updating their IT operations and offers a shop and scan smartphone app. This makes discovery of hyperlocal products and learning about vendors and artisans a fun experience for the customer. I like the management focus on an agile operation that will work to accommodate “in-the-moment” customer requests. And I like the fact that value and low pricing are highlighted.

Moving to a smaller format for grocers is a challenge because of the risk of losing the one-stop shop advantage of the larger format. With less space available for selling and backstock, these stores require smaller and more frequent deliveries to stay in-stock and on-shelf.

It can work but the SKU rationalization to set the store with the right products, along with the tools to direct which products need to be replenished/reordered at what times of day, is needed at a high level of accuracy to avoid being out of stock and disappointing the customer.

Forty-thousand square feet is nothing to sneeze at, there is still plenty of room for Meijer to thrill shoppers. But I agree with Neil, these stores cannot merely be mini-Meijers.

I love the focus on local artisans and regional suppliers, fresh florals and produce in a walking community. The Meijer store in my town looks like indie shops on the outside, but inside it’s huge. I think a lot of us are over these one-stop grocery store malls. It’s too much.

As populations move to more urban environments and shopping habits shift to convenience first, urban markets are proliferating. This is a smart move for Meijer in markets where they already have an extremely loyal following. The key to making the small stores successful hinges on the right assortment. It is a huge shift from their traditional supercenters and picking the right products to offer in a small footprint store can be challenging.

I think smaller, quick hit environments will grow because the pace of customers, who are stressed, pressed for time and need immediate fulfillment. The key for these new Meijer stores: everything must must look fresh and un-duplicated, different from what is presented in their superstores. That means signs, fixtures, staff appearances — everything. That creates a new identity and experience for the customer to enjoy.

Mini-Meijer won’t be a hit unless it brings a differentiated value. Several have already mentioned that this is not purely about the size of the store, but its function and relationship within the local neighborhood. It’s an important trend for retailers as it defines competitive areas, delivery costs, and assortment for customers. The best stores will leverage store experiences, select assortments, or engage in proactive cost management to stand out from the retail crowd — but they will need to start with strong localized demographic assessment to find out what they need to build and where. It’s the giant supermarket shifting to become a specialty retailer — and that’s not a walk in the park.

I think the move by Meijer is a smart one. The dearth of class “A” space in urban settings creates a pass or play scenario for retailers like Meijer. Their big box format simply cannot fit into reasonably affordable space in urban locations. This allows them to bend the cookie cutter to fit local urban settings and makes them competitive with entrenched urban brands that have the prime real estate.

The key to making this concept work is People, Process and Technology. How do you get merchandise delivered floor ready as the back rooms are configured differently? How do you load trucks? What is the frequency of delivery? What technology changes need to be made to support smaller, more frequent deliveries? And what is the store/back office layout, the new staffing model, etc?

It isn’t easy, but everything that has great value requires commitment.

This is great! Meijer does things right and they pay attention to details and I am certain that they will do the small format stores the right way to make them a success! More power to them!

In our area, Meijer excels in well priced grocery and HABA and struggles with general merchandise. Urban grocers tend to be higher priced, so if they can maintain their low prices, eliminate items that are probably even less relevant in high density areas (their RTW screams more budget than hipster) and play up the local vibe, I think they have a winner.

Braintrust
"I love the focus on local artisans and regional suppliers, fresh florals and produce in a walking community. "

"It’s the giant supermarket shifting to become a specialty retailer — and that’s not a walk in the park."

"I like the fact that the company invested in updating their IT operations and offers a shop and scan smartphone app."