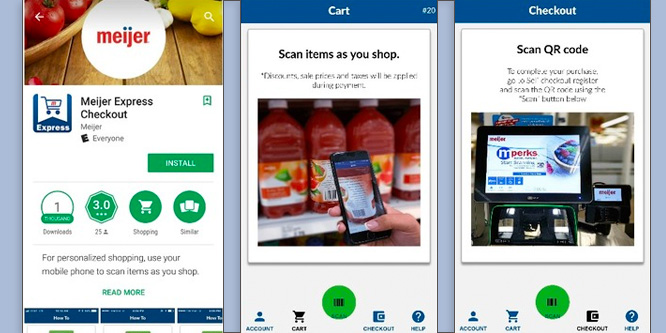 Meijer is looking to improve the shopping experience in its 235 stores with the rollout of a smartphone app that will speed customers through the checkout process.

The program, called “Shop & Scan,” enables customers to scan and bag items for purchase while they shop. When they reach the self-checkout, they simply scan their phone and pay for their purchase, greatly reducing the time spent at the front-end.

The new shopping technology works with Meijer’s mPerks rewards program so customers can earn points and redeem discounts without the need for added steps.

The retailer tested “Shop & Scan” at six stores in Michigan — 12,000 have downloaded the app on their iOS or Android phones — before deciding to roll out chainwide. Meijer expects to have the app available at all its stores by the end of the summer.

“Shop & Scan will make the Meijer experience dramatically faster and more convenient for our customers,” said Terry Ledbetter, chief information officer for the retail, in a statement. “This technology joins our curbside pickup and home delivery programs to provide yet another option for Meijer customers to personalize their shopping experience.”

Meijer’s announcement follows moves by rivals Kroger and Walmart to roll out similar apps. In January, Kroger announced the launch of its “Scan, Bag, Go” technology, which is available through a hand-held scanner provided by the store or via the grocer’s mobile app. The technology, which initially didn’t include payment using the app, is being updated to allow customers to pay without an added step.

Kroger plans to have “Scan, Bag, Go” available at many of its banners, including its namesake, Dillons, Fred Meyer, Fry’s, King Soopers, QFC, Ralphs and Smith’s, by the end of the year.

Walmart announced plans to expand its test of “Scan & Go” technology in January. The company, which began a pilot at stores in the Dallas/Fort Worth, Orlando and Northwest Arkansas markets, said it planned to expand its use to locations in 33 states. The technology allows customers to scan and bag items as they shop and skip the checkout altogether using a payment function on their app.

DISCUSSION QUESTIONS: How long will it be before technology that allows consumers to scan and pay for their purchases while shopping will become the norm in the grocery channel? How will the adoption of this type of technology change the layout of stores at the front-end?

Please practice The RetailWire Golden Rule when submitting your comments.
Braintrust
"When it becomes the norm, front-ends will become smaller ... Good chains will make that reclaimed area a high-value selling zone."

"It will grow even more valuable and prevalent if this becomes the one overarching seamless transaction point for all purchases from a retailer."

"It’s easy to put this down in comparison to the lore of Amazon Go, but no one really knows what goes on there..."

It will be years before it becomes the norm, but that doesn’t mean we shouldn’t be working on it now — we should. It has to be quick and it has to be convenient to shoppers for it to work. Often overlooked in discussions about this topic: how do you dispute a price? When it becomes the norm, front-ends will become smaller simply because they will not be as necessary. Good chains will make that reclaimed area a high-value selling zone.

This is one step short of Amazon Go, which doesn’t require shoppers to scan anything — the Amazon Go app does it for them. The real, unrecognized problem here, is that self-service retail, for the past 100 years, has basically been a warehouse business, with the retailer stocking their neighborhood “warehouses,” aka “stores,” with PALLETS of merchandise. The “stock pickers,” aka “shoppers,” then select from this massive in-store offering, and take it to checkout. The real problem for bricks retailers is that they refuse to recognize that they are pasting thin solutions on what is in reality a pallet vs. item distribution and management system. (Pallets for them; items for Amazon.) Pasting Jet onto Walmart was a multi-billion dollar example of this less than insightful response to Amazon. And the false dream of smart phones standing in for what shoppers by the billions already instinctively do in stores, is equally less than insightful. Shoppers do NOT habitually use inadequate personal devices — smart phones — to expedite their habitual practices in stores. Good grief! 😉
3
|
-1
-   Share

The promise of viable self-checkout has been just around the corner so many times that I wish I’d bought a Tucker (with its directional headlights — am I dating myself?)! It is really coming down to an acceptable percentage of trouble-free occurrences and a lower cost of offering. I do believe that we are almost there and that consumers will move in that direction with retailers. That premium checkout space is ideally suited to high margin, fast-moving items.

I don’t think this will become the norm for a very long time. Scan and shop with handheld scanners provided by the store have been around in the UK for years, but many still don’t use them. Why? They find them annoying, they worry they’ll do something wrong, they like talking to staff at the register, they can’t be bothered to sign up, and so on.

All that said, this is another choice in allowing people to pick how they shop. That’s a good thing. However, we must resist the temptation to see every new bit of technology as fundamentally reshaping and dominating the shopping experience. Change rarely works like that.

It makes a ton of sense to continue to pursue this model in the grocery space. The scanner approach adds additional expense and complexity so the app approach will likely be the winning model going forward. As this technology becomes more widely adopted, it is likely that some of the checkout lanes can be removed, opening up space for things like prepared meals or BOPIS stations.

Isn’t this essentially what Stop & Shop pioneered about a decade ago? Where’s the props for them?

This is the direction grocery is going. Just as online grocery has been slow to gain momentum, but a light is visible at the end of that tunnel, the same is true for new forms of in-store grocery checkout. It’s easy to put this down in comparison to the lore of Amazon Go, but no one really knows what goes on there (missed scans, etc.) and the scale of a grocery store vs. a convenience store is markedly different.

The real solution which is at least 15-20 years old is RFID. It would make everything fast and convenient, but it just cannot gain a foothold at an item level. One day maybe.

If we wait for the technology to “be norm in grocery” we’ll be waiting awhile. But, the industry needs to lean in and not leave innovation to others. This is highly disruptive technology that can improve the shopping experience and improve margins while (at the same time) destroy highly profitable sales for manufacturers. Collaboration with retailers, technology partners and manufacturers is key.

It will grow even more valuable and prevalent if this becomes the one overarching seamless transaction point for all purchases from a retailer. Not just a separate and standalone channel in an ecosystem for both digital and physical interactions. The only variable will soon be how to “receive” the items themselves. In-store, curbside, delivery or shipped.

This shift in the process of transacting and acquiring products has to have a direct effect on the functional aspects of store design since now the actual transaction could be done anywhere. Smaller and more efficient cash wraps, anyone?

The “scan and go” capability simply becomes a functionality within the app and ALL transactions could be done through the app. That’s where this is headed.

Running and maintaining an app is difficult. While I definitely see faster checkout as a core value proposition to download, these stores are going to need to continuously add value into that mobile experience to drive usage. As technology innovates (i.e. Amazon Go’s just-walk-out tech), apps with checkout only capabilities may become obsolete.

As these stores collect more customer data from their users, I imagine they will retarget them to join their home delivery programs leaving room for the in-store experience to differentiate. Front-end of stores will take on more of an experiential approach, driving inspiration and education around food culture/cooking. Exciting times ahead!

We live in a world today where private companies are regularly shooting rockets into space and vehicles can drive autonomously. It’s 2018 and it’s time for the traditional front-end of retail to be disrupted. Meijer is taking a great step here; however, it’s an incremental improvement and somewhat necessary given the competitive landscape. Amazon Go and checkout-less checkouts is the future and anything else is just an interim measure.

I understand the desire of shoppers to get in and get out of the store more quickly. Speeding up the checkout progress is obviously one idea for grocers to investigate. More will offer shoppers the option of using a smartphone app to scan their own groceries while they shop and then bag them.

However, I am not convinced that a critical mass of shoppers will want to do the work of scanning and bagging groceries while wheeling through the store. Maybe for small baskets? Well, they can use the self-checkout machine instead. But scan and bag will never work for very large carts of groceries. The novelty will wear off quickly.

Here’s an idea to speed up the checkout progress: Open more checkout lanes.

Braintrust
"When it becomes the norm, front-ends will become smaller ... Good chains will make that reclaimed area a high-value selling zone."

"It will grow even more valuable and prevalent if this becomes the one overarching seamless transaction point for all purchases from a retailer."

"It’s easy to put this down in comparison to the lore of Amazon Go, but no one really knows what goes on there..."