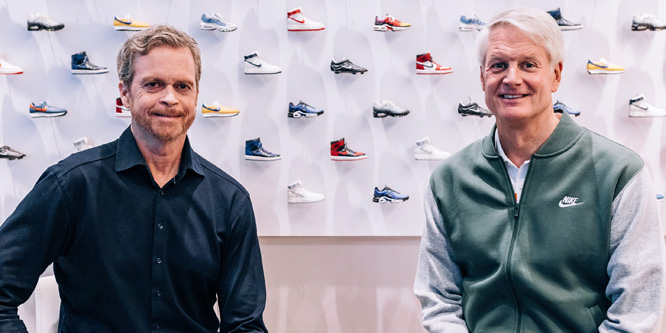 Nike announced earlier this week that its longtime chief executive, Mark Parker, would be stepping down from that role and be replaced by former eBay CEO John Donahoe in January. Mr. Donahoe, who has been on the Nike board of directors for five years, is also currently chairman of PayPal.

Mr. Parker, who replaced Nike founder Phil Knight as CEO in 2006 and will remain with the company as its executive chairman, said Mr. Donahoe’s background makes him an ideal fit to lead the brand at this point in time.

“I am delighted John will join our team,” said Mr. Parker in a statement. “His expertise in digital commerce, technology, global strategy and leadership combined with his strong relationship with the brand, make him ideally suited to accelerate our digital transformation and to build on the positive impact of our Consumer Direct Offense. I look forward to continuing to lead the Board as Executive Chairman, as well as partnering closely with John and the management team to help him transition to his new role.”

The decision to hire Mr. Donahoe resulted from a planned succession led by Tim Cook, CEO of Apple and a member of the Nike board since 2005.

Many see Mr. Donahoe’s hiring as a sign that the athletic lifestyle brand intends to put the pedal to its consumer direct digital transformation strategy. Nike, which generated about 15 percent of its sales from its own website and retailer partner sites last year, has previously said it sees that percentage rising to 30 percent by 2023. The company expects that sales generates online for its products will eventually surpass those sold in stores.

Nike reported that sales for its first quarter ending on Aug. 31 were up seven percent overall, driven by a 42 percent increase in digital sales. Earnings for the quarter were up 28 percent.

In August, the brand launched Nike Adventure Club, a digital sneaker subscription service for kids between the ages of two and 10. Members have three different subscription options, which range from receiving four pairs of sneakers per year up to 12. The cost for each of the options is $20, $30 or $50 a month. Nike rolled out the program after a pilot program that involved 10,000 members.

DISCUSSION QUESTIONS: What do you think of Nike’s decision to name former eBay CEO John Donahoe as the athletic lifestyle brand’s new president and chief executive? How do you expect Nike’s digital strategy to differ under his leadership versus that of Mark Parker?

"Very few brands are strong enough to believe that they could take on their own distribution channel as a competitor. However, Nike are one of those."

"With an online commerce background, John Donahoe is a smart choice for this role and his digital experience will help Nike accelerate its online growth."

Nike have to be looking at accelerating their direct-to-consumer sales approaches alongside approaches that require a smaller margin. In addition to their own flagship stores the brand is so strong that the opportunity to use new ecosystem channels is huge. New competition in many sports retail markets – Decathlon for example, who have their own branded products, makes things very different from how they were 10 years ago. Many of the larger sports retailers have similar private labels offering a potentially similar quality product at a lower price – Nike may well want to avoid their products being placed alongside those in retail stores.

Donahoe’s digitally-focused background will help usher Nike into a new era, particularly as relates to digital direct-to-consumer opportunities and owned retail. He has an opportunity to stage a digital rethink of Nike’s business across all channels and business models. The leadership transition will help to lighten some of the baggage that Nike has accumulated under Mr. Parker. Even if that isn’t the focus of the transition, a fresh face at the top will allow Nike to maintain its momentum without distraction. John Donahoe’s ascension makes sense given his familiarity with the organization as a board member and his digital background. Donahoe will provide direction as Nike pulls away from legacy wholesale relationships in favor of a direct-to-consumer push. Donahoe still qualifies as an outsider by Nike standards so his mere presence at the top should mitigate some of the taint from past scandals. Donahoe has a real opportunity to get credit for a cultural turnaround at Nike, with positive business performance as a tailwind. With Mr. Parker staying on as executive chairman, a smooth, drama-free… Read more »
1
|
0
-   Share

This is a great move for Nike and a good lesson for many brands to pay attention to. I’m guessing that Nike has plenty of sports/athletic/performance shoe and apparel experts on staff. They’ve proven that. But now the new paradigm in retail demands as much focus on the HOW as on the WHAT. HOW will the brand connect with consumers? Nike has previously announced a pull-back in brick and mortar wholesale distribution. That leaves their own brick and mortar retail and e-commerce initiatives to fuel growth. So John Donahoe’s background makes perfect sense as the platform to lead Nike’s evolution. Retail is a more expansive entity than it was a few short years ago. Lead accordingly.

Assuming this turns out to be an excellent move, it will come because John Donahoe turns out to bring far more wisdom across channels than the digital headlines imply. Nike’s announced strong digital performance appears too close to the projected storyline to reflect reality (which is messy) so I’ve been concerned there’s much we don’t know.

And, as a local in the Portland/Beaverton area, for the sake of my many friends who work at Nike I hope that Mr. Donahoe is able to build that strength Nike needs across all channels.

I love watching Nike, in part because of their ability to leapfrog the pack in plain sight of the competition and in part because they have a legacy of viewing the consumers, and therefore the market, in the broadest possible terms. The selection of John Donahoe makes perfect sense, not just because of his past accomplishments and not because he is a “digital or direct-to-consumer guy.” It’s a perfect choice because he has built his personal and corporate success on understanding that consumers are evolving, not static, entities. It’s 2019. Why are we still talking about “digital strategies?” Nike has a consumer-centric strategy which incorporates innovative use of media, social positioning, influencer marketing, a robust digital network, what I like to call Infotainment brick and mortar retailing, and a recognition that — when it comes to shoes — its consumers think in terms of identity, style, and performance, not, “channel.” Technology isn’t a strategy, it’s a tool for enabling strategy, and nobody understands that better than Nike. So there is no “digital strategy” at play… Read more »
1
|
0
-   Share

This can turn out to be a smart decision. But time will be the one to let us know. Nike makes good decisions. So why would we question this? I do not believe one man will make the difference. But he will set the course to be followed. Nike will most assuredly alter the course in the digital direction which is a wise choice. Watch for Mr. Donahoe to bring in some quality people to ensure that direction is followed and stays on course.

When does a supplier and business partner become a competitor? If Nike is targeting 30+% of their sales direct to consumer then they are real competitors to the retailers that have grown the brand to what it is today. Will other brands take the opportunity to move into that retail space and truly build a partnership with retailers displacing Nike’s distribution and market presence?

Very few brands are strong enough to believe that they could take on their own distribution channel as a competitor. However, Nike are one of those. Over the years, they have tried their best to upset their retailer customers by rationing stock, failing to deliver and more. Yet, they are still the brand retailers want to stock. Witness Sports Direct in the UK.

But how far can that be pushed? Retailers have to make sure they spend and continue to build the brand loyalty with end customers so the demand remains. Nike might just get away with it but this is a dangerous route for weaker brands to follow.

Nike has been a digital or multi channel brand for a number of years now. I do not see John Donahue as bringing a stronger brand e-commerce focus as much as launching enabler applications that can be leveraged across partner websites as well as Nike’s own. E-commerce is growing as a percentage of the shoe industry, and Nike, I am sure, wishes to bring their brand presence and lifestyle benefit to a higher level across their partner sites as well as their own. I do not see a significant difference in strategy going forward; rather, I see an expansion of the course strategy across more applications and more sites, helping to maintain Nikes ubiquity in the marketplace.

Nike has been on a mission to increase its direct to consumer sales and it is no secret. Many other brands/manufacturers are following similar strategies to increase total sales and profits.

With an online commerce background, John Donahoe is a smart choice for this role and his digital experience will help Nike accelerate its online growth.

"Very few brands are strong enough to believe that they could take on their own distribution channel as a competitor. However, Nike are one of those."

"With an online commerce background, John Donahoe is a smart choice for this role and his digital experience will help Nike accelerate its online growth."