Will recruiting military vets give Walmart and Amazon a competitive edge? 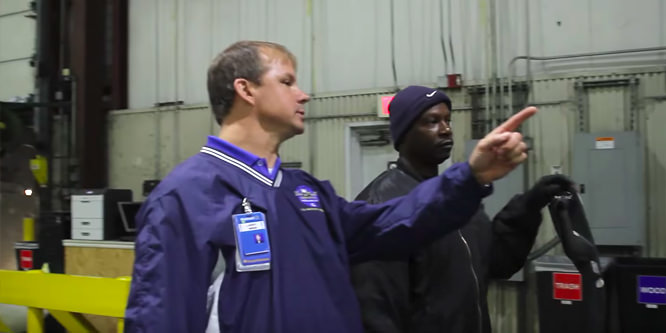 Many retailers have identified the value of recruiting military veterans as employees. Several large businesses have in fact established goals for recruiting workers who have served in the armed forces.

Walmart, which is among the retailers most active in hiring veterans, announced an expansion of its military leave of absence policy yesterday. The policy, which goes into effect on June 24, pledges that Walmart will make up any difference between what the company and the government pays its employees when they are called off for military assignments lasting more than three days. Walmart claims the expanded policy puts it among the first in retailing to apply its pay differential to include basic training.

“We’re turning jobs into fulfilling careers for veterans, active service members and their families, and we’re making it easier for them to work, live and serve,” said Gary Profit, a retired brigadier general and senior director of military programs for Walmart. “We believe that anyone who wants to serve in our armed forces should be able to do so without fear of losing wages or leaving their family in a lurch.”

On Memorial Day 2013, Walmart announced it would offer a job to any eligible U.S. veteran within a year of active duty. The goal set at that time was to hire 100,000 veterans by the end of 2018. Walmart claims to have hired 170,000 veterans in the interim.

In January, Amazon.com launched its “Military Leaders” program to recruit retired officers from the military and fast-track them for management positions within its logistics operations.

“When they come to Amazon they’re super-successful, they have a bias for action and have proven their ability,” Rachel Lessard, a former nuclear submariner and recruiter for Amazon’s program, told The Seattle Times.

DISCUSSION QUESTIONS: What do military veterans bring to retail organizations that places them in such high demand among employers? Will Walmart’s military leave of absence pay differential program and Amazon’s “Military Leaders” initiative result in either company gaining a competitive advantage in the marketplace?

Please practice The RetailWire Golden Rule when submitting your comments.
Braintrust
"All businesses should be diving into this great pool of candidates."

"One of the real values is that the companies are hiring people who are experienced in working in environments with others from diverse backgrounds..."

"Kudos to Walmart, Amazon and other companies that are tapping into this treasure trove of talent!"

12 Comments on "Will recruiting military vets give Walmart and Amazon a competitive edge?"

In addition to the points made in George’s article, military veterans are used to taking direction, working hard until tasks are completed and meeting deadlines. They are also trained in decision making while under pressure which can translate very well to both customer service and people management. Walmart, Amazon and Starbucks have publicly stated they are offering jobs to veterans, however all businesses should be diving into this great pool of candidates.

There is no real competitive advantage. Walmart just wants warm bodies. They purposely set low ball hiring goals they know they will blow away by default. They pull the veteran card just for the press release. Walmart hires millions of people and they have high turnover. Just by default they will be hiring hundreds of thousands of veterans. Particularly in areas like San Antonio that has at least six military bases and where vets are retiring with pensions by the bushel every day, looking to pick up some part-time work. I would hope that our vets would have better opportunities than having to settle for Walmart or Amazon. Is it me or does it seem wrong for someone to go from a Green Beret to being a Walmart greeter or an order selector at Amazon?

With all due respect David, I disagree that there is no real competitive advantage here for Walmart and Amazon with their veteran-focused human capital practices. Having worked side-by-side with veterans throughout my career, I can attest to the fact that they are strong assets to their companies for the many reasons that others have already pointed out here on this post. Is there a PR angle here for these companies? Yes, that is absolutely a possibility and will always play out positively for them because Americans by and large love our freedom and support veterans. But rather than seeing it as decorated veterans settling for low-level retail jobs, I think we need to see the long-term vision here laid out by these companies. The fact of the matter is that oftentimes military veterans have no private sector experience. So in order to be fast-tracked for management in retail, rolling up their sleeves and learning the organization from the ground up will set them up best for long-term success. Should they be greeters or order selectors… Read more »
2
|
-11
-   Share

I really doubt a retired vet with no private sector experience is being groomed for a C-level job. In my opinion, they are being exploited for PR purposes and I find it very offensive. If they are being hired as just another employee I’m ok with that. But pulling the vet card for PR purposes is in poor taste. I’ve got a disability and I would hope no one ever hired me because of that, but rather my abilities.

They are being groomed for business unit leadership or facility leadership roles. The primary obstacle to many with only military experience is the lack of a four-year degree. Companies like Amazon and Walmart are recognizing that for their mid- to upper-level management roles experiencing expansive growth, the most desired traits are organizational leadership, people skills and a drive for mission accomplishment. This is now getting prioritized over a degree requirement. You put that vet in a “bootcamp” upon transition to integrate the existing leadership skills and people skills into the host company framework and you end up with an employee with eight to 14 years of leadership training. You can’t find that in large numbers from the civilian labor pool. That is why they are doing it. They are not hiring them en masse into door greeter positions.

There are several advantages to hiring veterans. Although I expect some will react negatively to this comment, there is a public relations value that comes with making statements about their hiring. Before you eviscerate me, please note I am a veteran.

One of the real values is that the companies are hiring people who are experienced in working in environments with others from diverse backgrounds and with varying skill sets. This can benefit the vet as well, by providing them with insights that go beyond the technical skills they may have learned while serving. Veterans have also learned to function as a member of a team to accomplish goals.

I applaud both companies for their stance and would hope others will join with them to hire and support our veterans.

God bless all veterans as well as those in active and reserve service. When Walmart announced its veteran hiring goals during a keynote presentation at NRF15, the thunderous applause was suitable. Vets inherently understand command and control (the retail paradigm) and fulfill what is asked of them. They value family and the American dream and those who wish to contribute to these. In a life where 90 percent of success is just showing up — ready, willing and able — vets bring a mission-accomplishing attitude and, when matched to skills and training, capabilities that further enable the enterprise. Smart move Walmart. Let the contribution of vets continue.

As a veteran myself I can only assume that the teammanship, leadership and work effort we learn in the military are just some of the qualities that Walmart will enjoy as they hire more veterans. The pay differential will be a big factor in keeping men and women in the military reserve programs, as the pay is a major concern when one gets deployed overseas. As the U.S. relies on its reservists more and more this program will become significant. Leadership is the key to a successful store, warehouse or even in a headquarter office and I think Walmart sets the bar once again for retail.

Primarily veterans bring a sense of responsibility and order emanating from their military backgrounds. They have the ability to work well in structured environments, both characteristic of Walmart and Amazon.

I believe both programs will offer Walmart and Amazon a competitive advantage in the recruiting and development of their associates. An ancillary marketplace competitive advantage may be found in the differential advantage of employing members of the U.S. Armed Forces (active or retired) who are recognized as having one of the most respected careers in the U.S.

Kudos to Walmart, Amazon and other companies that are tapping into this treasure trove of talent! As a U.S. Navy veteran, I see a lot of business benefits in actively recruiting and creating veteran programs.

Whether you’re a former submariner or aviator, you have cultivated leadership skills and experiences in high-pressure situations that are invaluable. From team building to cutting through information clutter, from planning to executing, from being a learner to inspiring others, the military veteran brings dedication and discipline to any organization.

People are the ultimate differentiator in any organization. Strategies, technologies and business models can all be copied. What remains impossible to copy is creating the right type of culture — and people — to operate at speed and with agility to execute and learn from doing.

Bottom line, these military veteran programs are invaluable to the success of the companies in question and let’s not think that you can’t have creativity and discipline together.

It’s hard to say if these incentives by Walmart and Amazon would gain them a competitive advantage in the hiring market as it depends on how desirable those jobs are to veterans to begin with. On the other hand, it seems a natural thing to do to win some publicity without any real cost to either retailer. Should other businesses (retailers and otherwise) follow and offer the same or similar? Why not? What does it say about us a a society if we can’t offer appropriate treatment for veterans who have given their time and service to our country? Certainly veterans bring many great qualities to the retail workplace that make them excellent candidates for these positions.

I would hope that in even the absence of incentives like these businesses aren’t treating veterans unfairly when considering them for such jobs. For that matter, why aren’t similar incentives (or equivalent ones) being extended to other parts of the workforce by these same businesses? It would certainly attract more candidates!

In my opinion, there is no stronger group than retired or discharged military veterans. They have already been trained in so many ways, such as understanding and obeying orders, taking direction, meeting deadlines and many more. To not think a military veteran would not be an asset is ludicrous. Sure there are some who will not meet the requirements needed. But they are the minority. Having a veteran speeds up the learning process and helps strengthen the promotional potential needed for the company to grow.

Braintrust
"All businesses should be diving into this great pool of candidates."

"One of the real values is that the companies are hiring people who are experienced in working in environments with others from diverse backgrounds..."

"Kudos to Walmart, Amazon and other companies that are tapping into this treasure trove of talent!"