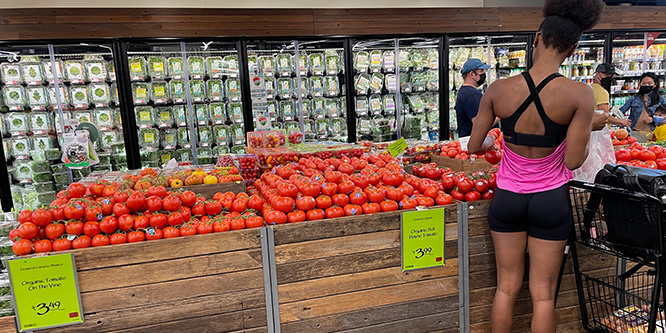 In the biggest update since organic standards were first established in 1990, the U.S. Department of Agriculture announced new guidelines designed to close loopholes and increase confidence in the often pricier product bearing the agency’s organic seal.

Key updates include requiring certification of more of the businesses, such as brokers and traders, at critical links in organic supply chains, as well as requiring organic certificates for all organic imports. The rules also standardize training and operations requirements for organic businesses and personnel and call for more on-site inspections.

Companies will have a year to comply with the new requirements, which officially take effect Mar. 20, 2023.

The updates were reportedly motivated by part by a series of articles detailing rampant fraudulent organics by The Washington Post in 2017.

This month, Department of Justice officials issued indictments in a multimillion-dollar scheme to export non-organic grain to the U.S. to be sold as a certified organic product. The accused individuals were alleged to charge 50 percent more for “organic” grain than conventional.

“This rule includes more robust traceability and verification practices that would have helped identify and stop this type of fraud earlier,” the USDA said in its notice.

Mark Kastel, founder of OrganicEye, which works with smaller farms, however, told the Washington Post, “I’m quite concerned that everyone is going to declare victory and go home.”

Mr. Kastel said violations of guidelines, such as not giving cows time to graze outdoors, amount to “a betrayal to the values that justifies consumers paying a premium price for organic dairy products.”

A survey earlier this year from The Hartman Group found 50 percent of U.S. consumers that buy organic food cite cost as the main barrier that prevents them buying more (down from 60 percent in 2020), followed by availability (20 percent) and poor labeling (18 percent). Of the respondents, 58 percent agreed somewhat or completely that USDA organic certification was weaker now than it used to be and 60 percent agreed somewhat or completely that organic was an excuse to charge more money.

DISCUSSION QUESTIONS: Will stricter certification guidelines significantly improve the price integrity around organic products? What other steps could grocers and organic producers take to further convince consumers of the value of organics?

Please practice The RetailWire Golden Rule when submitting your comments.
Braintrust
"The extension of the rules to all the critical links in the supply chains will undoubtedly help with the integrity of organic products."

"It would not surprise me if this also further led to an increase in prices and widened the gap between organic and non-organic."

"This is long overdue and needed. With the lack of integrity, it’s too easy for naysayers to knock down the value of organic products."

Interesting that the government is responding now if the impetus is a six-year-old article. I suspect that’s more a reflection of how the government’s views on regulations may have changed over the last few years. I can’t help but wonder if this is an example of diminishing returns. “Significant” improvement is a bit of a Holy Grail and, honestly, not something that I believe will significantly move the needle on consumers choosing to buy or not buy organic.

Perhaps I am naive or just a bit Pollyannaish, but it never occurred to me that I might be buying non-organic products labeled organic. Now I see how easy it is to get that extra dollar or two on my eggs, milk, bread, or broccoli.

Every time the product changes hands in the supply chain, there is an opportunity for fraud. Though the consumer may not realize it, the extension of the rules to all the critical links in the supply chains will undoubtedly help with the integrity of organic products.

I don’t believe it is the grocer’s job to convince the customer to buy organic at a premium price. That is a decision that the shopper makes before they enter the store. My off-the-wall suggestion is that the grocer not only has the big signs for the organic section but also signs over the other section shouting “non-organic.”

This is long overdue and needed. With the lack of integrity, it’s too easy for naysayers to knock down the value of organic products. As a family who buys predominantly organic products, it’s often frustrating to hear, “how do you know it’s truly organic?”

The only response I typically have is “well, it may not be organic, but what I know for sure is those ‘conventional’ produce items are treated with pesticides for certain.” Not the best argument, but when there’s a lack of integrity surrounding organic, it’s the best I’ve got. Looking forward to stricter guidelines.

Everyone loves saving the environment until it costs money to do so. There’s no denying that removing fraud will improve the integrity of organic products. However we know consumers are price sensitive and at less than 10 percent of food sales in the U.S., organics have a pricing problem and a long way to go before they’re less Lexus and more Corolla.

It would not surprise me if this also further led to an increase in prices and widened the gap between organic and non-organic. Part of the challenge all around is customer education on what organic truly means rather than somewhat of a buzz term.

My father headed up an NC-based furniture factory in the 1970s. His company made “solid wood” furniture which, according to the Federal guidelines, was an MDF, or pressboard, core with a minimum of 3/8″ wood as its laminate. As long as the surface laminate was 3/8″ or thicker it could legally be sold as solid wood. Today, a similar game is being played with the laws and practices in the organic space. Does anyone wonder why the consumer distrusts big business and government?

I agree with Gary on the math. If the baseline is small a significant improvement does have to truly be “significant” to be categorized as such. On the other hand, I do see the pricing delta between organic and non-organic to be significant and doubt that the new guidelines will have the hoped for impact.

Perhaps in the meat categories, where “grass fed beef” sounds lot better than “biotically bloated” meat … in other categories like, say, lemons — no way. I would be amazed if anyone can “taste” the difference between an organic lemon and a regular lemon, and with the price delta being significant (sometimes double), organic produce has a tougher sell ahead. You could tell me Greta Thurnberg (sp) personally certified a lemon grove — it would make no difference, I am still buying the $0.35 lemon….

Although I think price is a problem, I don’t think fraud has much to do with it. I believe people just don’t think the extra cost is worth it. And the cold hard truth is they may be right; or at least a strong case can be made that they are. Of the many things that people can do to improve their health, the potential gains from organics seem to be far down the list.

Most consumers of organics won’t even know about the stricter certification guidelines unless grocers tell them via signage in stores. Will it affect acceptance of high prices? Not really. Either you are an organics buyer or not under any circumstances.

A perception of greater integrity may be improved by organic product guidelines, but it will be in the eye of the beholder for customers as to whether they believe related price increases justify buying certified organic. Results at grocery retail will soon reveal whether this was a net positive incremental move.

Organic fraud is not the reason for organic’s higher prices. It is premium product perception and positioning. Go to any Lidl or Aldi and you will see that this model has been shattered since most of their stores are organic, non-gmo, pesticide free food that is the majority of their products throughout their stores … and it is priced at the same or below other more traditional products.

Braintrust
"The extension of the rules to all the critical links in the supply chains will undoubtedly help with the integrity of organic products."

"It would not surprise me if this also further led to an increase in prices and widened the gap between organic and non-organic."

"This is long overdue and needed. With the lack of integrity, it’s too easy for naysayers to knock down the value of organic products."