Will retailers go on the road with self-driving mobile stores? 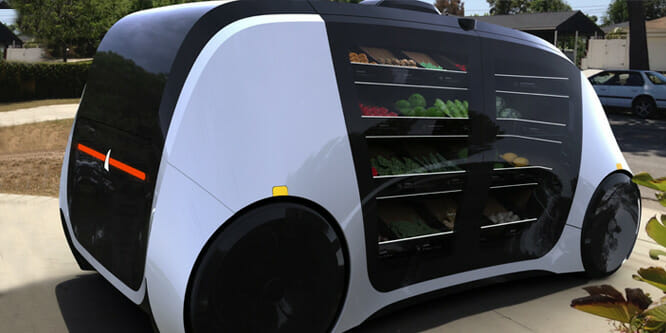 While legislators in some cities have been trying to keep autonomous robots off sidewalks, a new startup wants to enable any big box retailer to get a full wing of its operation rolling around on city streets.

Santa Clara, CA-based startup Robomart purports to be in talks with big box retailers and wholesalers to implement its mobile autonomous grocer platform, according to TechCrunch. The company plans to allow partner retailers to use its fully-autonomous, full-sized delivery vehicles to serve as auxiliary, mobile storefronts.

If the vehicles work as intended, they could allow big retailers to bring a portion of their operations into areas where they have no store presence, perhaps along a schedule with multiple stops per-day. In this fashion, the technology seems like a combination of a food truck (albeit possibly carrying non-food products) and a wheeled delivery drone. Retailer could bring along product selection from different departments on the road on different days. The service could also facilitate deliveries within a particular area.

Robomart plans to offer the platform as a white-label service, according to TechCrunch. Retailers would license the entire service, including the vehicle, as part of a two-year lease.

But there are potential hurdles that could stand in the way of the concept’s success. The framework for the legality of autonomous vehicles is still being developed on the federal level, so it is not yet clear how such vehicles would be classified. Finding legal places to park, as has sometimes been a point of concern for food trucks in big cities, could be another problem. And the service would no doubt face the same concerns about theft as with any store concept operating without human oversight.

Robomart is not the only tech company working on a fully mobile mini-mart. Last year, a Swedish tech startup and a Chinese university partnered to create and beta test Moby Mart, a convenience store on wheels that customers can direct to their location via app. At the time its testing in Shanghai began, however, Moby Mart was still controlled by humans rather than being fully autonomous.

DISCUSSION QUESTIONS: Do you see self-driving mobile stores catching on in the U.S.? In what situations might these vehicles be most effectively deployed by retailers and brands?

Please practice The RetailWire Golden Rule when submitting your comments.
Braintrust
"The bagel cart has officially been replaced! In areas that have ample foot traffic, these appear to be a perfect fit. "

"This will enable the ultimate in localization of goods, allowing for supply to literally follow demand."

"The biggest hurdle will be for cities and towns to monetize parking and update zoning requirements, similar to the food truck movement..."

15 Comments on "Will retailers go on the road with self-driving mobile stores?"

Absolutely brilliant! Yes — this concept of the mobile store will definitely catch on. It is a true extension of the omnichannel retail strategy. Will all shoppers be into this? No. But there will be enough that will be interested in the novelty factor, will have a passing interest (but perhaps not enough to motivate a trip to the mall) and there will be the busy rushed folk (like me) who could use the store that comes to me.

This will be an interesting new connection into order management systems, where the stores are moving around and inventory really needs real-time visibility for customers.
Another step will be an app that lets a shopper choose the brand that they would like to drop by their place of work/house/recreation at a certain time … kind of like Uber or Lyft for travel services.

I can think of a few scenarios where this retail delivery system makes sense.

The biggest advantage is that the “store” doesn’t have to pay rent during idle hours. The biggest hurdle will be for cities and towns to monetize parking and update zoning requirements, similar to the food truck movement of a few years ago.

I love new technology, but the technology that catches on usually does so because of purpose and convenience. If we already had a thriving industry of retail vehicles bringing merchandise and food items into neighborhoods the next step might be thinking about self-driving vehicles. But we don’t, at least not in a big way. The reasons are because of the cost and lack of support from the communities. When was the last time the Good Humor man had a long line of customers waiting for ice cream? We don’t think that way anymore because we want everything immediately. Delivery as fast as possible is the desire, and that is where technology continues to make it happen quicker and quicker. So I don’t see this going forward as the next big thing. Also, before any of these self-driving vehicles catch on, the public has to become comfortable with them and that most likely won’t happen until we have self-driving cars. That’s not too far in the future, but until that happens, I don’t see self-driving vehicles… Read more »
0
|
0
-   Share

Yes, I think this has potential – indeed, it is possible we’ll see combined delivery/pick-up here/buy-now vehicles to service the needs of urban populations. This type of model would reduce servicing and fulfilment costs for retailers and so is attractive, especially in low-margin categories like food.

Naturally, cities will need to adapt to accommodate this and other self-driving vehicles. Some will do this faster, some slower — but gradually all will move in the right direction.

An idea ahead of its time. For mobile stores to work the entire autonomous vehicle issue has to be resolved. Issues will be resolved but in my opinion, not in the next five years. For a retailer to move forward before technological, legal, insurance, etc. issues are resolved would be risky.

The bagel cart has officially been replaced! In areas that have ample foot traffic, these appear to be a perfect fit.

As grocers experiment with this new technology I expect a few more ideas to be spun off and wouldn’t be surprised if we start seeing a deli, fresh produce, snacks and who knows what else carts popping up outside office complexes and busy street corners.

This is indeed a great concept however, why does it need to be driverless? This is an opportunity to extend the brand through its human interaction as well. To surprise and delight the customer. Imagine the relationships an individual could make if they have a steady route. Also, with no human oversight, the obstacles just increase. And that’s my 2 cents.

It is coming in the next three to five years. Then we will have to legislate against overcrowding downtown streets and other venues and roads with these ambulant stores that pay no rent. While many in the country complain about government overreach and legislation, we bring it on ourselves with our own innovation.

This will enable the ultimate in localization of goods, allowing for supply to literally follow demand. These bots will revolutionize supply chain design, taking on more of an Uber-esque ideal. Level 4 autonomy (autonomous in specific environments) will be adequate to get started, and would allow for material reach.

It’s inevitable and only a matter of time. Tons of regulations to write and then follow, but the opportunity is there in urban areas where parking is limited. Eventually, this will work and be cost-effective in suburban areas. The branding upside opportunity is limitless.

This is like the vending machine of the future. Why have the machines set in place when they can move to where to customers are to maximize use? This concept is definitely part of the future of commerce in some shape or form; the only question is … when?

Yes, there is great potential in this concept of mobile stores/showroom/delivery vehicles for retailers to experiment with. The one obvious question that comes to mind, however, is why aren’t we seeing this with human drivers today? Why wait for driverless vehicles? For me, the best result from a driverless vehicle solves one of two problems — provides needed driving skill for difficult scenarios where human beings may have difficulties, and allows for larger numbers of vehicles up and running quickly where otherwise you would need too many people to train successfully.

It will be interesting to see where local governments get involved and how quickly they allow these vehicles to multiply in number!

I LOVE this concept and can see it working as an additional convenience option when placed within the existing parking lots of the stores they represent as a secondary pick up/shopping point for last minute staples/meal kits/grab & go lunches, and whatnot.

Really brilliant idea. The most interesting aspect of these vehicles is the potential they can bring to areas with a limited number of retailers. This would be a huge advantage to customers that live in these areas as well as very good business for big-box retailers.

This is only one of the many potentials of these innovative vehicles, I have many others in mind but I’m waiting to see how this is going to develop. Certainly, this is one of the most innovative aspects of retail I’ve heard of lately.

Braintrust
"The bagel cart has officially been replaced! In areas that have ample foot traffic, these appear to be a perfect fit. "

"This will enable the ultimate in localization of goods, allowing for supply to literally follow demand."

"The biggest hurdle will be for cities and towns to monetize parking and update zoning requirements, similar to the food truck movement..."