Will Shoppable Shorts become a viral sensation for YouTube? 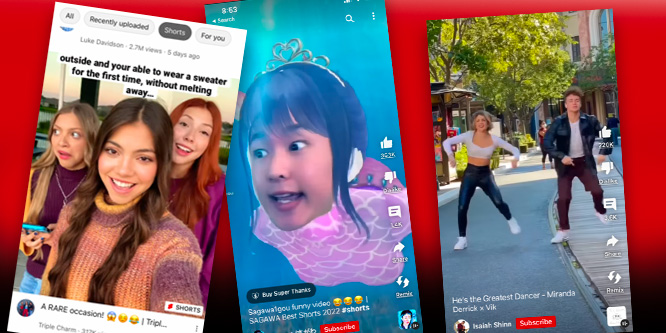 YouTube in late 2020 launched its Shorts feature to keep up with a new generation of competing video services posting short-form content. Now YouTube has added an e-commerce element to Shorts, so customers can buy as the minute-long videos fly by.

The feature, which allows customers to buy products directly from ads running between YouTube Shorts, has been introduced to help platform owner Google keep revenue coming in as the digital advertising world faces a slowdown, according to Financial Times. Shoppable Shorts are live in the U.S., Canada, Australia, Brazil and India, and the platform is experimenting with an affiliate model to pay content creators who sell through them. Beginning early next year, content creators running advertisements on their Shorts feeds will receive a 45 percent share of the advertising revenue.

Short-form video has rapidly increased in popularity, with a Hubspot marketing report calling the medium the most effective and popular social media content form of the year. According to an Influencer Marketing Hub infographic, 73 percent of consumers prefer short-form videos, and videos in this abbreviated format are more likely to go viral and have the highest return on investment.

YouTube has been adding other non-advertising related features to Shorts as well to keep up with the expectations of users of other short-form video platforms. TechCrunch reports that YouTube had revised its music licensing deals and would be allowing users to include 60 seconds of music on their Shorts. The previous limit was 15 seconds, even though the videos themselves lasted up to 60 seconds.

YouTube has also been experimenting with other new e-commerce features such as livestreaming.

While Michael Martin, YouTube Shopping’s general manager, told Financial Times that the company has narrowed its focus on livestream shopping to target markets like South Korea due to its slow stateside adoption, YouTube has been having a livestream-heavy holiday this year thus far.

Early in November, YouTube hosted a 10-day livestreaming event called “From YouTube to You” in which content creators promoted holiday gifts and merch drops, according to DigiDay. The event focused heavily on the beauty category with Ulta Beauty, R.E.M. and Tula among those taking part.

DISCUSSION QUESTIONS: Do you see shoppable ads on Shorts making it more likely that users will see YouTube as a place for shopping as well as watching content? How should retailers and brands evaluate this opportunity?

Please practice The RetailWire Golden Rule when submitting your comments.
Braintrust
"YouTube has trained us to skip the ads -- not engage with them -- and with 250 million hours of YouTube content consumed every day, that training runs deep."

"I see livestream as a better path forward than trying to out-TikTok TikTok."

"Cultural hurdles aside, we should expect TikTok to dominate this space when shoppable commerce becomes the next big thing."

10 Comments on "Will Shoppable Shorts become a viral sensation for YouTube?"

This will be a heavy lift even with video consumption trends. Younger consumers want to be entertained and traditional consumers will need to adopt new behaviors. I see livestream as a better path forward than trying to out-TikTok TikTok.

Color me skeptical that the core YouTube audience will indulge in shoppable ads, perhaps with the one exception being influencer videos. The young people I know don’t watch the ads at all. Rather, my young friends are laser-focused on the “Skip Ad” timer, thumbs poised to pounce the moment they can skip to their content. YouTube has trained us to skip the ads – not engage with them – and with 250 million hours of YouTube content consumed every day, that training runs deep.

As a viewer, my reaction is, let’s just get to the video. As a judge of marketing strategy, this is brilliant.

YouTube is the second-largest search engine in the world — second only to its parent company, Google. It directly monetizes this mega-asset. It is likely to deliver more spontaneous purchases than planned ones. People can go to Google for a specific search.

Retailers should be cautious in copying this strategy. Extraneous ads may be counter-productive in an actual shopping environment. I doubt the shopper is going there for entertainment.

Shoppable shorts are in essences digital pop-ups. When well done they will drive results.

YouTube’s success with Shoppable Shorts will depend in large part on whether China continues to be allowed to operate TikTok in the U.S. because it will be tough to compete for attention against their mass appeal. Additionally, many influencers don’t like Shorts because it doesn’t give them time to tell the compelling stories that drew their audiences in the first place. But considering the small added cost of posting Shorts and the low risk of losing their long-form customers, it makes sense for YouTube to launch this format and refine to establish themselves as the heir apparent should TikTok go away.

Considering all the momentum and virality offered by the TikTok Bytedance platform, it will be very challenging for YouTube Shorts or Instagram Reels to replicate that level of success. Livestreaming and shoppable commerce have gained significant momentum in the East. However it has not quite resonated at the same level in the West.

Cultural hurdles aside, we should expect TikTok to dominate this space when shoppable commerce becomes the next big thing. Consumers have been trained to skip the YouTube ads that pop up before every video. Additionally, the authenticity, and storytelling offered by user-generated content on TikTok is precisely the right approach necessary to make livestreaming a viable commerce strategy for retailers and brands.

I read the other day that the remote control was invented by someone who wanted to skip thru ads more easily; the world hasn’t changed much since then, except perhaps “YouTube” ads are even more annoying than television (who thought it possible?). If others are like me, I don’t see this going anywhere.

The concept of shoppable shorts is one thing, yet it does not guarantee that there will be a successful shopping experience that can compete with the likes of Amazon or Walmart online.

Video is where it is at, and especially YouTube, which isn’t exactly a novice in this space. Well done video ads that are entertaining and have a good hook will do well. Poor ones, not so much. Shorts are a compelling place to get people to watch, and perhaps buy, in short order.

Definitely a smart move by YouTube! A Product Detail Page on an eCommerce site offers a visual representation of the product, including all the necessary information. Similarly, shoppable Shorts in video format would provide a similar but more interactive PDP experience. However, the only concern here is, what would the check-out experience look like. Do customers need to fill in all their details on youtube which otherwise is by default saved when they shop from other websites? Since customers may opt-out of making a purchase because of the added task of filling in addresses and payment details. Also, customers with youtube memberships will have these details saved, so for sure, the shoppable content would be a preferable option for them.

Braintrust
"YouTube has trained us to skip the ads -- not engage with them -- and with 250 million hours of YouTube content consumed every day, that training runs deep."

"I see livestream as a better path forward than trying to out-TikTok TikTok."

"Cultural hurdles aside, we should expect TikTok to dominate this space when shoppable commerce becomes the next big thing."