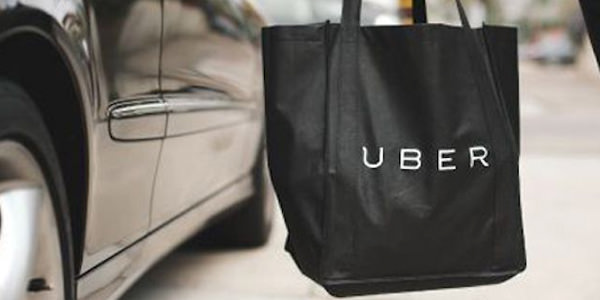 Uber is reportedly partnering this fall with dozens of retailers to provide a speedy delivery option for shoppers on a wide range of e-commerce websites and apps.

According to Re/code, the launch of the service, described internally as UberEverything, will start in Manhattan with some luxury retailers. Talks are also ongoing with B2B e-commerce players, Bigcommerce and Shopify, to reach the many clients they work with rather than making one-off partnerships with every retailer.

Under the set-up, online shoppers in valid zip codes will see an Uber same-day delivery option. Deliveries may be made by bike messenger or cars, depending on the market, with parcels picked up at stores. Stores may or may not pass Uber’s delivery fees on to shoppers. Items will not be available for purchase through the Uber app.

UberEverything would build on last fall’s launch of UberEats, now operating in nine cities worldwide. The service lets users order through the Uber app and choose from a few menu items during set hours each day. In April, the company launched UberRush, a courier service in New York City.

Uber last year reportedly ran into problems with its delivery experiments. With Gilt, Uber was challenged covering the insurance for lost items. With luxury jeweler Alexis Bittar, at times, not enough drivers could be found to fulfill delivery promises.

Uber also faces competition from Amazon, eBay and Google as well as host of startups such as Instacart and Deliv. Both Apple and Starbucks recently chose Postmates over Uber to deliver their goods.

On the plus side, Uber continues to rapidly add drivers with the core taxi service already receiving a valuation of $50 billion. Underlying predictions that it may be the logistics network of the future, Uber already has more than 200,000 active drivers worldwide, roughly double the size of the delivery workforce at UPS.

"There’s nobody who has as big of a real-time logistics network than Uber," Jason Calacanis, a serial entrepreneur who was one of Uber’s first investors told The Wall Street Journal. "If they can make another business line work with this infrastructure, that could transform the business."

PYMNTS.com likewise wrote that with the costs and complexities around delivery so far outweighing the payback for many stores, e-commerce needs a more efficient delivery system.

According to PYMNTS, "Google-backed Uber, whose play now appears to be on-demand services based on data analytics, is well-poised to serve this need. This would also work to better utilize spare capacity and save costs at a time when the service continues to add drivers aggressively."

Do you think Uber has the potential to take e-commerce delivery to the next level? How do you see the company competing against the traditional and newer delivery models?

Please practice The RetailWire Golden Rule when submitting your comments.
Braintrust
"My opinion is that there is no real long term program here, rather some experimentation and PR. There is more to delivery than just anyone handing a box off. UPS and FedEx train their drivers and school them in more than driving a truck."

"Sure, Uber can deliver everything, as long as cost isn’t relevant. If a customer MUST have that sweater within an hour, the delivery fee shouldn’t bother her. While the rollout should get some press, it’s hard to see the economics of this on a day-to-day basis."

This is an exciting time for commerce in general, not just e-commerce, to say the least. I think this opportunity is only the natural progression of leveraging the masses to get goods to the masses. I think partnerships with, rather than competing with, existing logistics providers could achieve a ubiquitous delivery network and realize the true potential of effective models.

My opinion is that there is no real long term program here, rather some experimentation and PR.

There is more to delivery than just anyone handing a box off. UPS and FedEx train their drivers and school them in more than driving a truck. Uber (apparently) has high turnover and mostly not full-time drivers. That’s a recipe for poor service. Add to that situations where there’s more money in driving a passenger than making a package stop and there will be lots of delays, missed drop-offs, and other delivery issues.

Once upon a time Uber provided a taxi service. Where will that take them in the future?

Sure, Uber can deliver everything, as long as cost isn’t relevant. If a customer MUST have that sweater within an hour, the delivery fee shouldn’t bother her. While the rollout should get some press, it’s hard to see the economics of this on a day-to-day basis.

This topic has been discussed to death at coffee tables around the world probably since the company came into the media lens.

The problem has always been the issue they already faced — the security of high-value items. Insurance costs for Uber delivery service must be higher than traditional couriers as the risks are higher.

Perhaps it will work if they allow Uber delivery service from trusted Uber taxi drivers only. That makes this more exclusive and somewhat more secure.

If you can put it in a car (or pretty much any other form of transportation), Uber is going to be a consideration. Anything related to delivery; people, merchandise, food, etc. Anything and everything is open season for Uber.

It will be interesting to see how the operation works. Local delivery companies will need to learn to compete against Uber. Not the other way around. Uber is a disrupter, not just a new face in the market. It’s not about keeping them from coming into the market. It’s learning how to co-exist. Taxi drivers have been trying to stop Uber. Can’t be done. You have to learn to thrive in the competitive environment.

I agree with Gene’s observation encouraging us to take a broader view and recognize the changes retailers have made in the recent past and the possibilities of more change in the future. I’m in Manhattan and stunned by the variety of transportation options that have been made available to me over the past two years or so. Just when I was processing Uber with variable pricing along comes Gett with one-price-fits-all.

If Uber partners with retail innovators and adopts new categories of transportation and delivery services, the possibilities for a new revenue stream and delivery service are there. At the same time visionaries will keep finding new approaches that appeal to consumers and retailers alike.

I think the question is more about whether Uber and other companies are able to take their potential services to every new level that opens up in the next one to two years.

In big urban communities like NY, San Francisco and Chicago, where the drivers get back to back short rides and the delivery sources are convenient to the area, this model works for all concerned. I happen to know a couple of Lyft drivers in the Atlanta area and they have no interest in this type of service. Atlanta is very spread out, so rides are longer but sparser. The driver often has to cover 10 or more miles on their own dime just to pick someone up. The $30 ride usually makes up for it but if they drive 10 miles to take someone 2 miles? No so much. Drive to a mall to pick something up then drive to suburbia to deliver. What is the likelihood of catching another ride from that remote location? Not good. So they have to drive 5 to 10 miles to get to a central location. It is not a money making deal in this type of area unless the deliveries are restricted to Mid-town, Downtown and Atlantic Station.… Read more »
0
|
0
-   Share

“Uber already has more than 200,000 active drivers worldwide, roughly double the size of the delivery workforce at UPS”

Of course the UPS drivers are full time, and they drive actual delivery vans, professionally maintained….

There is, of course, nothing remarkable about the idea of (essentially) part-time drivers delivering something—it’s been the mainstay of the pizza business for decades—but can it work for hard goods, and is Uber the one to do it? As the article noted, problems seem to exist with regard to liability and reliability; problems which can be overcome, it seems, only if Uber becomes organized much more like a conventional company (i.e. actual employees). But that torpedoes their raison d’etre, which is to (try to) enjoy all the (revenue) benefits of being a company, without the organizational costs that “being a company” entails.

I think this is certainly worth a try for Uber. Their drivers are already on the road, so why not get them to solve one of the major pain points for online retail?

It might be a bit premature to see this is the way of the future for a few different reasons. First, there is a high turnover rate for Uber drivers and in order to make this work, Uber needs a consistent workforce.

Second, what about cost? Shoppers already try to avoid paying for shipping, so why would they want to pay even more for delivery?

Point to point single delivery has to be a cost nightmare, unless there is something around the corner that allows for highly optimized drive routes of multiple pickup and delivery along the way. This with the odd passenger pickup and delivery at the same time? I suppose Uber can develop this kind of capability, but without it, I don’t see how this gets past the pilot stage. It’s not the same model as the current Uber one.

It is certainly one route, all comes down to economics of the last mile. This is a variation to the bike messenger approach we see in the financial district. As long as there are enough high value, urgent items that people are willing to pay for, the model works. The reason why UPS and FedEx and USPS exist is that they are built for efficiency and speed of mass movement of packages. Question is, will there be enough business to go beyond experimentation to go around, and what are the terms of service for missed deliverables and loss/damage items?

Braintrust
"My opinion is that there is no real long term program here, rather some experimentation and PR. There is more to delivery than just anyone handing a box off. UPS and FedEx train their drivers and school them in more than driving a truck."

"Sure, Uber can deliver everything, as long as cost isn’t relevant. If a customer MUST have that sweater within an hour, the delivery fee shouldn’t bother her. While the rollout should get some press, it’s hard to see the economics of this on a day-to-day basis."