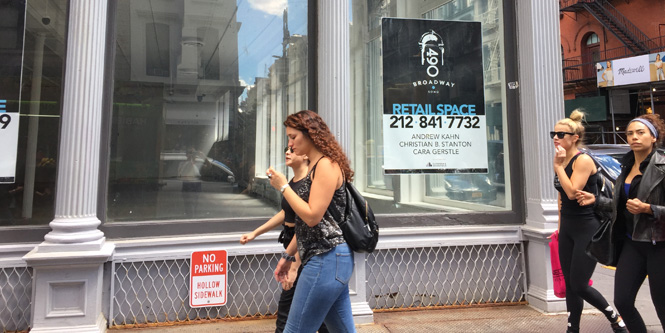 Not to get all Dickensian, but if you’re a landlord of retail real estate, this may be the best or worst of times for you depending on the market you’re in and the type of space you operate.

If you’re in Manhattan, there’s a good chance you have space available, reports The Real Deal. A new survey conducted by the real estate brokerage firm, Douglas Elliman, found that 20 percent of Manhattan storefronts are vacant, up from seven percent in 2016. A separate tally by Manhattan Borough president Gale Brewer found a total of 188 storefronts vacant along Broadway alone.

As to the why behind Manhattan’s skyrocketing vacancy rates, it depends on who you ask. Indy retailers blame landlords for continuing to raise rental fees to drive them out and bring in more chain business. Landlords claim they are willing to offer below market deals for merchants willing to sign longer leases, but they aren’t finding many takers.

In an opinion piece on Crain’s New York Business site last month, Bob Phibbs, president/CEO of The Retail Doctor and a RetailWire BrainTrust panelist, wrote that landlords and retailers are both to blame for the current state of affairs in New York City.

Landlords, he argued, “who passively wait for a bite from a bigger fish should be penalized” in the form of a “vacancy fee.” Failure to do so, Mr. Phibbs maintains, will tamp down on retailing, a key growth engine for the city.

Retailers, for their part, need to offer compelling reasons for consumers to visit and shop at their stores. Instead of simply ceding sales to online competitors, store operators must commit to “outstanding customer experiences” led by associates trained to excel in serving the needs of consumers.

While retailers and landlords may be finding it hard to make it in New York City, there’s a market to the south that is doing quite well. The Richmond, VA region’s retail vacancy rate was near a record low at 4.6 percent during the second quarter, according to the Richmond Times-Dispatch. In the affluent Short Pump suburb outside of Richmond, retail vacancies are at 2.7 percent, with a market rental rate of $29.48 per square foot.

DISCUSSION QUESTIONS: What factors are driving the current boom and bust realities of retail real estate in markets across the U.S.? Can you offer solutions for reducing vacancy rates in places such as Manhattan?

Please practice The RetailWire Golden Rule when submitting your comments.
Braintrust
"Both landlords and the retailers themselves should be aggressively analyzing what works to drive traffic and make it stick."

"It is all too easy to say “it’s just a dip in real estate and will self-correct” or “it’s all greedy landlords” or “retail is dying” ... as NYC goes, so goes the nation."

"I disagree with a vacancy tax; it’s yet more government planning and interference to solve a problem that is, in large part, caused by NYC’s very over-active government."

10 Comments on "A tale of two retail real estate markets"

Thank you for covering this today. It is all too easy to say “it’s just a dip in real estate and will self-correct” or “it’s all greedy landlords” or “retail is dying.” The hard fact is as NYC goes, so goes the nation. Unless and until a number of players come together and find out what it takes to rebuild retail, Manhattan will point the way to how retail corridors die. In rural areas, it is easy to say that smaller retailers close because of competition or they want to retire. It’s much harder to say that when half a million people may drive or walk past your store each week. And they vote.

Bob, I’m loving your vacancy fee idea! I was just at an event with Hubba in Raleigh, NC yesterday and we were discussing how unfortunate it is that landlords in the city are sitting on property waiting for that bigger fish, leaving retailers to battle over the little property left over. Gotta make it more expensive to just sit there.

There is never a single factor, or even a few. Retail real estate depends upon a mosaic of variables starting with the demographics of the customer base. On the basis of real estate itself, it’s always about location. However, today there are more variables such as “click and collect” which have a major bearing on whether a location is convenient for customers to pick up. With today’s location analytics and customer tracking technologies, both landlords and the retailers themselves should be aggressively analyzing what works to drive traffic and make it stick. The NEX Mall in the Midwest even collaborates with its retail tenants to provide the tracking services and the tracking reports. “Build it and they will come” is no longer enough in today’s world.

I agree with Bob that there are many factors to this dilemma, but greed is certainly the main one here in Manhattan. Many of the landlords here are big and really don’t care if they keep a storefront empty until someone with deep pockets or a tenant that is willing to sign a long-term lease comes along. Can you blame a retailer for not wanting to sign a long lease in these uncertain times? This trend is not only true in retail space but in office space as well. The co-working trend is alive and mostly well here in NYC because landlords have always been too greedy with what they charge for commercial space, given that they are allowed to charge you for square footage that you cannot possibly use — including the lobby space, the vestibules, the elevator and so on. I had one lease where the landlord added a surcharge to bring electric power from the basement up to our floor. This does not happen in other markets. Garages charge $100 dollars to… Read more »
2
|
-1
-   Share

Great things happen when retailers and potential landlords work off the same page with shared visions of the potential performance of the space. As landlords make deals with retailers and fill space, more shoppers show up, thus creating more foot traffic, and everyone wins. If landlords truly believe their facility will work for a retailer, offer the retailer the incentive of initial lower rates or perhaps an escalating percentage of sales lease. Thereafter, when the first option period ends, both landlord and retailer can discuss increases that continue to provide for the landlord and retailer a reasonable shot at success. Structured correctly, if both the landlord’s and retailer’s assumptions of the market and facility are right, everyone wins. It’s the getting in that is hard, but that is what brings life to an empty area.

I completely disagree with a vacancy tax; it’s yet more government planning and interference to solve a problem that is, in large part, caused by NYC’s very over-active government. Here are just some of the reasons retail in NYC is suffering. The minimum wage has been pushed up by over 40 percent in three years. That’s a nice thing for people that work at stores, but it has increased costs for retail businesses, especially smaller enterprises. NYC imposes retailers with a Commercial Rent Tax of 3.9 percent of their store rent. This has only just been changed (despite initial opposition from the Mayor) to exempt more small retailers — previous to this the exception the rate had not been changed since 2001 despite rapidly rising rents. This is a really burdensome expense. For mixed-use buildings where there is residential accommodation on upper floors, the rent-stabilization laws have effectively frozen rental income for landlords. With their own costs rising, some have tried to compensate by pushing up rents on the commercial spaces in the buildings. Commercial… Read more »
5
|
-2
-   Share

Before investing in a new location, 1.) Define your strategy. Who is your target and where are they? You should no longer “build it and they will come,” — it’s far too risky. 2.) Execute on that strategy. Is your target audience yearning for your store, or will you have to pull them in? 3.) Look for existing opportunities. Perhaps partnering with another organization might prove to be more lucrative.

This is a multi-sided issue with many players involved — until they all come together with a willingness to change their ways, nothing will change this trend. It’s not just landlords who are unyielding, the city could incentivize retailers as well as landlords. Retailers could invest in the local community in more interesting ways to obtain concessions from the city in other areas, and so on. While all parties involved seemed to be interested in speaking out about the problem, you have to wonder how strongly they feel about changing their ways to accommodate a changing trend.

Money, the local economy, and local regulations and taxes are all factored into who will rent or not rent. NYC is a mega touristy town and for years has had very high rents. But with online changing everything, businesses are backing away from renting as they simply can not turn a decent profit. The monster retailers have moved big time online as well, and unless they get a sweetheart deal, they may think twice before opening anymore stores in these high rent districts. I just had my horrible landlord stop in for the first time in 6 years, which was quite shocking. I told him to start thinking about a better lease or possible sale of my part of the building, as the rent is way too high for the business climate today. Rural poor economies across our country are seeing stores shutter, with a mega Walmart, an Aldi, and 20 Dollar stores taking most of our retail dollars, and it is difficult to continue, unless things change in terms of fixed expenses. I’ll figure… Read more »
2
|
0
-   Share

I don’t think it makes much sense to compare Manhattan (i.e. “Downtown” NYC) to the whole of metro Richmond: I’m sure landlords on Broad Street (in Richmond) would salivate at the thought of “only” 20% vacant.

But back to the more basic issue of retail space: we hear endlessly here on RW and elsewhere that the U.S. is overbuilt with it, and (even) if it wasn’t true before, I would think it would become so as more sales move online, and Millennials retreat into the world of “experiences.” (Though I have some doubts about the latter). And the recent era of cheap money that encouraged building spec space, which could only be filled by poaching tenants from existing projects has exacerbated things.

Braintrust
"Both landlords and the retailers themselves should be aggressively analyzing what works to drive traffic and make it stick."

"It is all too easy to say “it’s just a dip in real estate and will self-correct” or “it’s all greedy landlords” or “retail is dying” ... as NYC goes, so goes the nation."

"I disagree with a vacancy tax; it’s yet more government planning and interference to solve a problem that is, in large part, caused by NYC’s very over-active government."