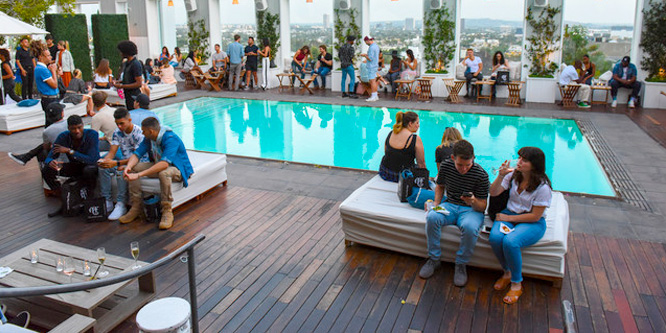 Abercrombie & Fitch has partnered with sbe, the lifestyle hospitality company, on a series of co-branded events and pop-up shops to support its A&F Club, currently with more than 4.5 million members.

The rewards include exclusive events and special benefits at sbe’s hotels, restaurants and entertainment venues.

The first event, A&F’s “Do It In Denim” launch, took place at the Mondrian Los Angeles. Attendees, including A&F Club members, were able to view and try on Abercrombie’s new denim collection. Members of the A&F Club can also enter to win VIP access to grand openings and other cultural events at sbe properties under the partnership.

Founded in 2002, Los Angeles-based sbe operates lifestyle hotels — including SLS, Delano, Mondrian, Hyde, The Originals and Redbury — as well as residences, restaurants and nightclubs. Restaurants include Umami Burger and Katsuya.

As a benefit to sbe, hotel guests will have select access to Abercrombie pop-up shops and exclusive offers.

Sam Nazarian, founder and CEO of sbe, said in a statement, “As global brands targeting a similar customer, we align incredibly well.”

Stacia Andersen, brand president of Abercrombie said, “We are excited to partner with sbe to bring unique experiences to our shared target demographic. With its global presence, its dedication to its guests, and its strong track record of creating immersive experiences, sbe is a great fit for our brand and together, we look forward to creating authentic, innovative events for our customers.”

Retailers have been increasingly interested in hospitality. In their pursuit of experiential retailing, Williams-Sonoma’s West Elm and Restoration Hardware have both opened hotels to better showcase their offerings. In June, Amazon partnered with Marriot to bring its Echo smart speakers to hotel rooms. Many retailers are experimenting with pop-ups in hotels, including Warby Parker, which opened one at New York City’s The Standard Hotel in 2012. But the cross-promotion and loyalty scheme behind Abercrombie’s sbe partnership appears unique.

DISCUSSION QUESTIONS: Do you think Abercrombie’s partnership with sbe will work as a loyalty driver? How would you rate the pros and cons around retailers’ cross-promotional efforts with hospitality establishments?

Please practice The RetailWire Golden Rule when submitting your comments.
Braintrust
"Know the hotel, know its clientele and then take like-minded brands to them — it’s a great formula."

"My biggest question is about A&F’s current target market, and how it aligns with the sbe customer."

"In any case, this is the way retailers need to think. It’s not just about the stuff on the shelves and great fragrance anymore..."

My biggest question is about A&F’s current target market, and how it aligns with the sbe customer. It’s possible that shoppers in their late 20s and early 30s (a key demographic for sbe hotels) used to be A&F shoppers in its heyday 10 or 15 years ago. But are they still shopping there? Unless A&F is in the middle of a giant course correction and no longer interested in the junior and young men’s markets, this seems like a mismatch — unlike some of the other cross-promotions going on between retailers and hoteliers right now.

Another great example of aligning brand and consumer profiles. Hotels are designed and managed to cater to a particular segment and demographic of client. The pop-up concept allows brands to present their products and services to their target consumer. Know the hotel, know its clientele and then take like-minded brands to them — it’s a great formula.

We are going to continue to see these sorts of strategic “mash-ups” as retailers seek ways to extend the brand beyond the products and the transactions, and build new customer relationships.

For Abercrombie and other retailers, the opportunity to partner with the hotel and hospitality sector is clearly a win-win proposition. Abercrombie and other fashion brands will be wise to align themselves with lifestyle-focused brands, particularly as it enables the company to extend their reach beyond the brick-and-mortar locations as well as change the perception of the brand, which needed a refresh.

Cross-promotional efforts with luxury hotel groups such as sbe is a clear winner, as it enables Abercrombie to drive exclusive offerings, showcase new styles and re-invent what the brand means, beyond the old iconic store model from the late-’90s.

Regardless of how this will impact loyalty, I like this concept because it offers retail an opportunity to tap into a different area of the consumer’s purse — the vacation section. Where consumers are looking for fun and different experiences and are prepared to spend extra money. Yes it’s true most consumers are looking for fun experiences these days however, the mindset may be a little different when they are staying in a hotel and likely on vacation. For my 2 cents.

The vitality and buzz that sbe brings to brands create a profile that benefits everybody, until events and gatherings resemble private trade shows or one big shill.

It’s been a long time since I worked at A&F and how times have changed. I applaud the thinking here. A&F is probing the market for growth opportunities outside the mall. I became a big fan of hotel retailing after visiting Las Vegas every year and marveling at how the whole shopping population in the hotels rotates in and out every week. Fresh customers weekly! This A&F effort is not quite on the hotel mall level, and that may be a good thing. But at any rate, bravo for the thought process.

In any case, this is the way retailers need to think. It’s not just about the stuff on the shelves and great fragrance anymore, it’s about lifestyle and being where your customers are all the time. Fail or not, it’s a damned good try IMO. Keep it up.

The problem, I imagine, is that people “grow out” of the A&F brand once they get older; so trying to draw out the process — at least through their twenties, if not longer — makes some sense. Unfortunately, I think sbe is just too obscure or perhaps I should say “limited” for this to work. And that’s of course a basic problem with aspirational marketing: finding something that’s “cool” and trendy, but at the same time still accessible.

Like many of my BrainTrust colleagues, I question how good of a match this is — but they are trying to reach a new audience so perhaps it’s a strong collaboration.

Retailers are looking for the next frontier of where to connect with consumers and hospitality is there for the taking as is co-working, airports and other transit hubs. Malls and the high street are also still great places to do business for retailers with the right products and services. Also, hospitality and some of the newer venues can easily full fill a retailer’s pop-up needs.

I don’t think the partnership with sbe will be be a significant driver of Abercrombie’s loyalty, but it should help increase brand awareness and introduce the brand to new demographics. On the positive side, the cross-promotional initiatives create more interest in the brand and will drive incremental sales. The potential down-side is that the pop-ups might not be profitable as the sales might not justify the cost of staffing — especially in venues that have very sporadic consumer traffic.

This is another example of the many retailers that are experimenting with several new retail approaches and models to see what works. Kudos to A&F for trying something new.

Braintrust
"Know the hotel, know its clientele and then take like-minded brands to them — it’s a great formula."

"My biggest question is about A&F’s current target market, and how it aligns with the sbe customer."

"In any case, this is the way retailers need to think. It’s not just about the stuff on the shelves and great fragrance anymore..."