Amazon goes after thousands of fake review groups on Facebook 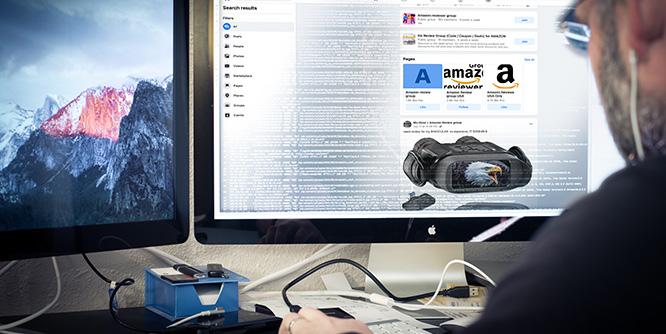 Amazon.com yesterday filed lawsuits against the administrators of more than 10,000 Facebook groups that it says recruited people to post fake reviews on its site in exchange for money or free products.

The groups were set up to find people “willing to post incentivized and misleading reviews” on Amazon’s websites operating in the U.S., the UK, Germany, France, Italy, Spain, and Japan.

Amazon plans to use the information it receives through discovery in the suit to identify the companies or people engaged in this recruiting effort and remove any fake reviews they are connected with. The company said this will help find those engaged in defrauding its customers that it hasn’t been able to detect through its technology, investigators and monitoring processes.

“Our teams stop millions of suspicious reviews before they’re ever seen by customers, and this lawsuit goes a step further to uncover perpetrators operating on social media,” Dharmesh Mehta, Amazon’s vice president of selling partner services, said in a statement. “Proactive legal action targeting bad actors is one of many ways we protect customers by holding bad actors accountable.”

Amazon said that groups like those it has found on Facebook have solicited fake reviews on a wide range of products available for purchase on its platform. Meta removed one such group earlier this year that had more than 43,000 members. Amazon said that its investigators were able to determine that the group’s administrators managed to hide their activity from Facebook “by obfuscating letters from problematic phrases.”

The online retail giant said that the latest legal action is part of its ongoing effort to remove fraudsters from its sites around the world. The company said previous suits have enabled it to shut down review brokers in the U.S. and other markets.

Amazon maintains that it is diligent in seeking to prevent fake reviews and removing those that get through its filters. That said, it maintains that the problem goes beyond its platform and is an industry-wide challenge that will require a public/private partnership with other affected companies as well as social media sites and law enforcement. Amazon said it “remains eager to continue to partner with all the relevant stakeholders to achieve that mutual goal.”

DISCUSSION QUESTIONS: Is the public’s perception of the validity of reviews on Amazon’s site affected by legal action it takes to find fraudsters? Is Amazon correct that the issue of fake reviews is so big that it requires partnerships with other sales platforms, social media sites and law enforcement?

Please practice The RetailWire Golden Rule when submitting your comments.
Braintrust
"Amazon going after the fakers is a nice gesture, but I hardly think it will move the needle on consumer perception of Amazon’s reviews."

"We have giants trying to outsmart each other and us."

This made me chuckle. I belong to a couple of photography groups on Facebook. I keep being served up posts/reviews raving about certain high end lenses and cameras by a guy with a Japanese sounding name (sorry…can’t remember it right now), and in tiny print on the bottom of the post it says “sponsored by Amazon.”

And then there are the many sites that offer up reviews, and when you click to look at the product they take you right to Amazon.

Then there are the mysterious unordered items that show up in people’s homes — likely so they can be “verified purchasers” in a review.

We have giants trying to outsmart each other and us.

Unless there are hundreds of them, I tend to ignore reviews on Amazon or go directly to the one star ones and try to figure out if they’re credible.

I too had a chuckle when first reading this, when Amazon – for years – has undercut major brands selling on their platform, issuing any number of reasons for doing this, but primarily to make more money. But now they’re sounding the alarm over fake reviews? Hmmm…

I believe (or hope, anyway) most consumers have gotten better about identifying astroturfing when they see reviews online. This isn’t just an Amazon problem; it exists on every e-commerce site that allows customer reviews. Amazon going after the fakers is a nice gesture, but I hardly think it will move the needle on consumer perception of Amazon’s reviews. Too little, way too late.

Amazon faces several issues from using its data from third-party products to develop competing ones, but the biggest issue it faces is its members’ lack of trust in the site’s product reviews – for its own brands or those from third parties.

When a consumer can’t see or touch the physical product they must rely on, or at a minimum consider, reviews by others who supposedly purchased the item. Amazon’s latest action will increase the trust its members have in the remaining reviews. The problem Amazon has is that to get the message out that they are taking this action they must acknowledge the magnitude of the problem with false reviews that existed.

People look at reviews. That Amazon is willing to make a major effort to thwart the fake reviews is good for everyone (other than the culprits who leave the fake reviews). “In reviews we trust!”

I can’t imagine pursuing fraud would itself be a negative, but it’s harder to say how publicizing such efforts will work: will be people be impressed, or will they simply become aware of something they never really thought about? “The reviews aren’t as unreliable as they used to be” probably isn’t the goal they’re aiming at.

Braintrust
"Amazon going after the fakers is a nice gesture, but I hardly think it will move the needle on consumer perception of Amazon’s reviews."

"We have giants trying to outsmart each other and us."