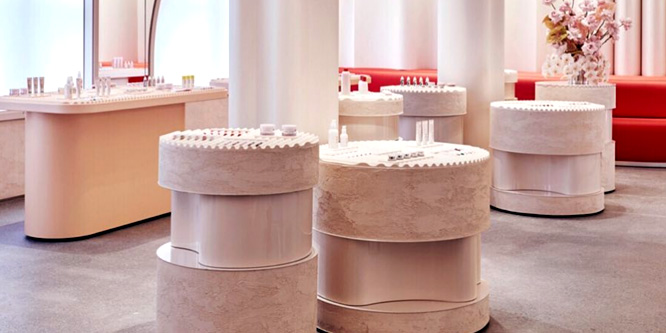 Glossier, which has become a cult beauty brand with Millennials despite foregoing department store distribution, opened its first flagship in New York City, and it’s all about discovery and community.

In an interview with The New York Times, Emily Weiss, who founded the business in 2014, said Apple has inspired the design of the brand’s physical spaces, which have included pop-ups and its first permanent store in Los Angeles. But she likened Glossier NYC to “adult Disneyland.”

Toward that end, visitors first encounter a red-quartz, winding staircase that leads upstairs to the main shopping area. On the second floor they’re greeted by associates wearing pink mechanic’s jumpsuits alongside a big floral arrangement. In view are over-the-top displays such as a red couch shaped like lips and the mirrored Boy Brow Room with supersized versions of Glossier’s popular “boy brow” product.

Elle described the space as “the thing Instagram dreams are made of.”

NYC ✨ GLOSSIER FLAGSHIP ✨ NOVEMBER 8 ✨ 123 LAFAYETTE STREET ✨ Two shoppable floors of Glossier in real life at the same address where it all started. We can’t wait to have you.

The spectacle supports discovery. For instance, Ms. Weiss told Architectural Digest that the curving staircase “makes you practically want to run up the stairs and see what’s waiting around the corner.”

To further encourage discovery, Glossier positions merchandise, not on shelves, but on communal tables with stand-up mirrors so shoppers can easily test products. A wet bar with sinks and cleansers is provided so customers can clean-up to try out more.

The community aspect is supported by interactions with Glossier’s offline “editors” at display tables as well as the numerous elements encouraging social sharing.

Glossier’s success, including raising $86 million since its founding, has been credited to its accessible and affordable product line-up, messaging that foregoes heavily-caked supermodels in favor of showcasing everyday women, and its focus on consumer interactions that inspire products and supports 1.5 million Instagram users.

DISCUSSION QUESTIONS: Does Glossier’s approach to physical retail sync into why it’s been so successful online? Does the direct-to-consumer brand’s unique approach to the beauty space have significant growth potential?

"Glossier seem to really know what they’re doing. This isn’t their first physical retail foray either."

"What a great example of redefining the store as a true destination that people put on their lists when they visit a new locale."

I really believe Glossier gets it. They understand the role their store plays as part of their overall brand promise, and have designed experiences that enrich the brand experience. One need only look to Ms. Weiss’ comment to Architectural Digest to see how much they understand what shoppers are seeking from the Glossier store: “It’s not about selling things, it’s about making people feel things.”

Wow, a down-to-earth approach. One that emphasizes, “It’s not about selling things, it’s about making people feel things.” One that brings the adventure of discovery to shopping and experience. Plus products that are meant to be affordable, despite the high-end approach. Sounds like a recipe for successfully bringing online to the physical world.

Glossier is approaching this wisely. The approach is novel. If they can replicate it, and keep that clean, discovery sense going… they will succeed. Looking forward to hearing more about their growth!

It can only help the online brand to showcase its products. Once a customer has a mental imprint of how exciting the store visit was, they would be naturally more inclined to shop the brand online. The challenge is to place these showcase stores in areas in which they will bring the most return i.e. densely-populated centers with demographics that match that of Glossier’s ideal shopper. The showcases also help to raise interest among prospective investors.

Creating select destinations that complement your brand community makes tremendous sense. Not unlike Yeti. I do like Ms. Weiss’ comment “It’s not about selling things, it’s about making people feel things.” There is typically too much emphasis on visual merchandising and not enough merchandising with other senses in mind — audio and olfactory merchandising. Glossier is creating an immersive, experiential destination to enhance their brand and align with their brand community. I hope Ms. Weiss has a process to invite visitors to join their online community during their visit to “adult Disneyland.”

Anticipation, novelty, shareability – the pieces are all in place for Glossier’s physical retail experience to strengthen its already loyal following. Yes, Glossier’s approach to physical retail does have some growth potential, but more importantly it anchors the brand with staying potential. Opening a new dimension which consumers can interact with the brand in an authentic way deepens the roots of all its core following, whether customers are are able to experience it first hand or not. Visitors will gain the experience and social status that goes along with sharing their story, and the rest of the brand community will get to live vicariously through them in a win-win for all.

Yes, Glossier hit it out of the park with their flagship store. They’ve always been meticulous about crafting the perfect aesthetic. But now, having a physical storefront adds an emotional experience to the mix. Glossier isn’t a store so much as it’s a tourist destination. This carefully crafted experience gives Glossier an element of staying power that is way beyond what their product alone could achieve.

It’s all about experience and clearly Glossier understands that. Purchases are the result of the community, discovery and engagement trifecta with the brand. This is a brand that concerns itself more with the customer than the competition. With the customer as the focus, there’s limitless growth potential. And I’m looking forward to seeing where this brand goes!

Glossier seem to really know what they’re doing. This isn’t their first physical retail foray either. A series of super popular pop-ups have helped it to figure out what customers respond to, as well as to create buzz, and this will have all informed what it’s doing with this permanent space. It’s a place to play and explore, and to take pictures, and this is exactly what physical retail should be about. Glossier gets that you can’t sell to people anymore, you can only give them reasons to buy and by making its space about discovery and fun it lets customers discover those reasons for themselves.

Glossier makes shopping fun! Cosmetics purchases are based on how the products make the consumer feel. Many consumers love the theater of shopping and Glossier brings that element to its online stores and now is infusing theater into their physical stores.

The fun, immersive experience of shopping in Glossier stores will attract droves of customers and the environment will inspire more purchases. The theatrical experience they have in the store will turn customers into brand enthusiasts.

Glossier approach is perfect for the brand. Make the place an experience that encourages social media in the stores and education. This is a marketing expense and from what it sounds like, a great use of marketing dollars especially as they start to plateau with what they can do in digital. As long as they don’t need to turn a profit on this store — it will work great. I bet lots of brick and mortar retailers in NYC wish they did not have to make a profit.

What a great example of redefining the store as a true destination that people put on their lists when they visit a new locale. “It’s not about selling things …” Indeed! A wonderful example of creating a destination that just happens to be a “store. I would not expect to see large numbers of these stores popping up everywhere — where they are located is just as important as what’s inside and they’re wise to think carefully about this.

"Glossier seem to really know what they’re doing. This isn’t their first physical retail foray either."

"What a great example of redefining the store as a true destination that people put on their lists when they visit a new locale."