Arby’s has the meat – and it’s gamey 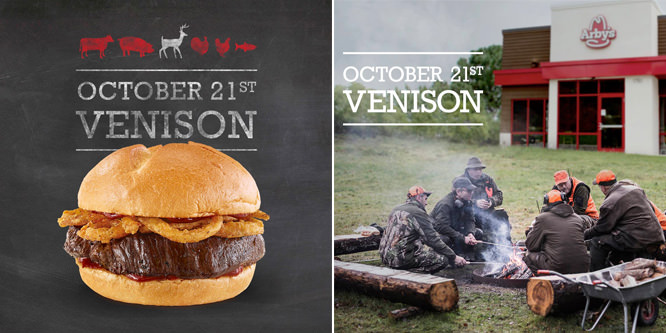 Arby’s is renowned for sandwiches stacked with thin-sliced roast beef. But the chain recently offered an option that was uncharacteristically gourmet, both for itself and quick-service restaurants in general – a venison burger.

Arby’s did a one-day chain-wide promotion of its venison burger earlier in October, as reported by Eater. The sandwich was originally launched at a few select locations (in markets known to have a lot of hunters) as a limited-time promotion last November. But this year’s one-day promotion had customers throughout the country lined up out the door.

Supplies, however, are limited supply — it took Arby’s a year to source enough venison from its supplier to manage the promotion. Further, regulations and high prices could also prevent wild game from going mainstream. Still, the success of Arby’s venison burger may make more fast-food restaurants want to look into exotic meat.

Exotic meats have grown popular over the years among foodies looking for a unique dining experience. Chicago’s now-closed Hot Doug’s, for instance, was well-known for offering sausages made out of non-traditional meats like alligator and kangaroo.

And some fast-casual chains have also become known for their exotic items. Fuddruckers, for instance, offers a menu featuring elk at some locations. And the Ted Turner-owned Ted’s Montana Grill boasts a menu built around sustainable bison.

The notorious mid-1990s spate of Mad Cow Disease infections in the UK led to a decade-long ban on British beef in the U.S., along with a spike in the consumption of non-beef meat among those concerned with the safety and sustainability of beef production. As recently as 2004, eight years after the ban, the Chicago Tribune was reporting an increase in bison consumption tied to renewed anxieties over Mad Cow stateside.

Some sources indicate that exotic meat is experiencing another rise in popularity, with Specialty Food reporting that in Canada, there was a 10.6 percent increase in the consumption of exotic meats between 2010 and 2015. The meats tracked include horse, venison, camel and rabbit. Bison, ostrich and zebra were not represented in these numbers.

"Arby’s has to continuously put forward new meats since that is its long-running and expensive TV spot strategy."

"It’s just tough no matter how long you marinate it. Only top chefs seem to get it right, in my book."

We have the MEAT. It is their brand and it has always positioned the brand for carnivores. As such, the novelty makes sense. While interest is great, it is not a change of brand. Just an extension. The bump is temporary because consumers CRAVE excitement and newness. If anyone anyone in the fast food category thinks it is the market’s hunger for wild game then they have no concept of brand equity.

I doubt other restaurants will make this leap anytime soon. Arby’s has to continuously put forward new meats since that is its long-running and expensive TV spot strategy. Naturally, the idea is to bring in mostly current customers to sample the new offerings and to keep them away from competitors. Other brands would have to create new strategies for these offerings that creatively would be tougher to pull off, in my view. Ask Fuddruckers about its experiment with ostrich burgers some years ago.

The U.S. lags the rest of the world — particularly Europe and Australia — in its consumption of “exotic” meats in general. Much more rabbit, venison and wild boar hits the tables of Europe and it has always been a delicacy. Arby’s simply matched their core positioning with U.S. consumers’ quest for new dining experiences.

One thing worth pointing out it that all the “exotic” or “game” meats sold commercially are farm-raised and USDA inspected just like any other meat. It is illegal to sell any true wild game or sport-caught fish for any reason in the U.S. In fact, the vast majority of venison served in the U.S. is fallow deer sourced from New Zealand.

There are plenty of reasons to eat all-natural, minimally-processed organic meats that make them attractive. Flavor, low fat and cholesterol and no additives or supplements. Wild venison (not sure about Arby’s burgers) actually is lower in cholesterol than lean domestic turkey breast.

Arby’s marketing team hit a home run with this promotion and the way restaurants are now being perceived by today’s consumer anything is possible. With the Applebees and TGIFs of the world struggling to stay open it gives room for some of these fast food chains to grow their menu and push out a $7 to $10 burger.

Regarding the everyday menu of these fast foods chains, I think having promotions like these builds excitement and helps separate the brand from their competitors. It sounds like sourcing the venison for this project was difficult enough for one day so I could only imagine the issues they would run into if they had to supply it 365 days a year.

If the end goal for Arby’s is to build excitement around their brand I’d say keep the game meats exclusive and tie them into seasonal events.

“Meats out of the Mainstream” was the #1 key trend projected for 2017 by The Food Channel. This trend is driven by people always looking for the next new sensation. The constant nature of limited time promotional offers — especially at fast food restaurants like Arby’s — has trained Americans to always look for something new to eat. We’ve gotten jaded and believe there will always be something new. One key to the future success of this trend will be the traceability of these new meats. Transparency is another key food trend — people want to know where and how the animals were raised, the environmental impact all the way through processing and shipping and how easy it will be to get the meat without damaging the budget.

Odd that this was Arby’s. When I think of a burger (of any variety) I don’t think of Arby’s. A fancy burger joint, sure.

Having grown up with a father who was an avid hunter, I ate all kinds of wild game and gamey it was. I love that Arby’s has done this. It fits their brand but this is not likely to be something that takes the market by storm in fast food. Sure, throw it on the menu and watch them line up at first but, wild game is hard to prepare right. It takes time and technique. Neither of which can be easily translated to fast food. Perhaps like Ted’s, they can focus on just one wild meat and get that right. For my 2 cents, I dislike venison and I’ve had it prepared lots of different ways. It’s just tough no matter how long you marinate it. Only top chefs seem to get it right, in my book.

I agree with Tom and Kim that venison is a logical extension for the Arby’s MEAT branding. Venison provides a novelty and unique experience, but there will never be enough supply in the U.S. to consider it a menu item.

Buffalo is the more logical choice for a “gamey” extension. However, even with all of Ted Turner’s buffalo supply, it is much more expensive than beef. Which makes it hard to make even buffalo a staple on a fast food menu that is very sensitive to price.

Kudos to Arby’s for thinking outside of the box and trying something different. In the food industry, especially fast food, customers get easily bored with more of the same. Variety is the spice of life, if even for a very limited time.

I think Matt may have been a little too eager to use “success.” Sure it was such as a promotion — sold out, got big publicity (presumably, as I haven’t heard of it outside RW) — but the fact that it took a year to source for even this limited supply tells me a lot more of the limited potential.

In the long run I’d put my money on the PETA crowd.

Arby’s is taking the Limited-Time-Offer to a new level with their venison burger. Good on them!

"Arby’s has to continuously put forward new meats since that is its long-running and expensive TV spot strategy."

"It’s just tough no matter how long you marinate it. Only top chefs seem to get it right, in my book."