Are consumers stumped by percent-off promos? 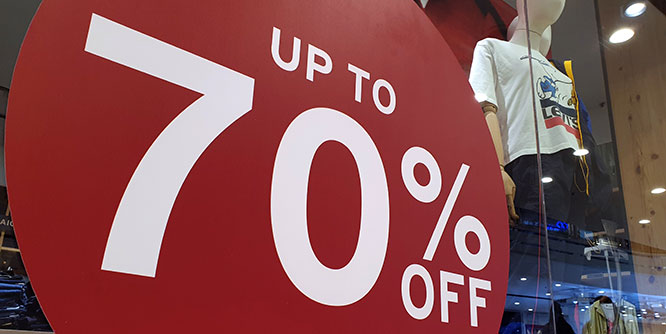 A recent study found that, when advertisers use percentages to promote products, customers tend to be way off in their assessment of what the numbers mean.

The study, as reported by The Wall Street Journal, found that when dealing with percentages exceeding 100 percent, customers more often than not misinterpreted what the figure was meant to signify. When asked to calculate a price of an item that was to be sold for 102 percent more than its original price, more than half of the 400 respondents miscalculated — adding only two percent of the price to the original value, rather than doubling the price and then adding an additional two percent. A tendency for participants to confuse “size of the whole” with “percentage of change in price” when the numbers were bigger than 100 percent appeared to be the explanation. When dealing with percentages lower than 100 percent, study participants fared better.

Consumers have been paying closer attention to percentages as rising inflation has increased consumer awareness of pricing. Practices that retailers and brands use to maintain margins, such as shrinkflation, where the size or content volume of a container is reduced by some percentage while maintaining the same price, have been grabbing headlines and having customers more carefully scrutinizing unit prices at the shelf.

The percentages study is not the first showing that asking customers to do math about pricing in the moment can point them to unexpected conclusions.

Last year a study on coffee prices found that when prices are set just below a round number (for instance, $19.99 or $19.97), customers frequently misinterpret its relation to other prices. Participants in that study were more likely to go for a more expensive, larger cup of coffee when given a choice between a $1 cup and a $1.25 cup, than when given a choice between a 95 cent cup and a $1.20 cup. Doctoral student Juhna Kim, who led the study, said that customers perceived price differentials like $19.99 to $25 as being a bigger leap than $20 to $26, when the opposite is true.

DISCUSSION QUESTIONS: What are the most effective price messaging tactics — percent-off, BOGO, et al — for moving merchandise? What ethical concerns should guide retailers in their price messaging to consumers?

"While I was a retail buyer, I changed a promotional strategy from using percent-off to dollars-off. Hands down, the dollars off strategy performed better..."

"Not addressed in the article was the prospect of shoppers being sent the “wrong” signals when percentage discounts get too lofty."

20 Comments on "Are consumers stumped by percent-off promos?"

I can say that our retail customers LOVE BOGOs – Buy one get one, in all its infinite varieties. Buy one get one for 50 percent off (effective 25 percent discount), or buy more save more as well (spend $100, save $25, spend $200, save $60). So I would guess these are some pretty effective promos, at least in terms of driving sales.

I think a bigger concern, though, is making sure that the promo offered is actually profitable. My Revionics colleagues have a strong opinion about this: something like only 20 percent of promos offered actually are profitable. The rest might drive top line sales, but just give margin away. So apparently, it’s not just consumers who struggle with promo math…

It’s true, customers don’t do math. I have tried every version of price promotions and the dollar-off version was the most motivational. Shoppers can see a tangible savings and equate $5 off with $5 in their pocket. This has been more effective than the same savings displayed as a percentage off.

Unless the percent off is significant — I think most respond to 50 percent off for example — it gets confusing for customers. Showing actual amount discounted gets a better response in my experience. BOGO also makes sense. I don’t think people stop and think “ah, 50 percent promotion here.” I think they just respond to the two-for-one message.

Retailers should make discounts simple, which generally means showing the actual dollar savings. Some retailers do this by showing a headline percentage off and then showing, on the fixture, a variety of old and new price points.

Depending on the retail model and strategies, aggressive percent off promotions across the store could be sending the wrong kind of messages. Yes, customers shouldn’t have to calculate what 70 percent off is, etc. However the biggest challenge is managing customer expectations and the perceptions that are associated with rampant merchandise promotional signs across the store.

The everyday low price and buy one get one approach seems to resonate the most with customers. Brand equity remains a challenge, especially in the department store sector, which has been disrupted by off-price retail, dollar stores, Target, and the Amazon impact. The right promotional, pricing and merchandising strategies drive sales and loyalty.

I question the validity of a study where shoppers were “asked to calculate a price of an item that was to be sold for 102 percent more than its original price.” What retailer does that? (Or maybe I’m being obtuse and I don’t understand the example.) The age-old debate between percentage savings and EDLP rages on.

Whether you accept the validity of high/low pricing or not, many companies have built a promotional business on high percentage savings. (This is part of their value proposition, whether the deals are expressed as price points or as broad percentages.) JCPenney (a decade ago) is the textbook case of a retailer who decided to drop its dependence on “phony” percentage savings, and suffered the consequences with its core customers who responded to that tactic.

With regard to the study’s methodology, I think you’re correct. In its defense, though, there is an issue of reference points: the old “XX% off original price” being a common (and egregious) example … particularly when the item was never really sold for that.

Unfortunately, for this to work, you need to execute a price as marked process as well so there is no question what the retail price is going to be.

This is amazing. What we are talking about here is confusing and/or frustrating the consumer. Only to result in agitated customers. Why would anyone do that? We’re here to make friends not disgruntled customers. And by the way, wouldn’t it be interesting to have a test with in-store personnel on the floor, requesting floor staff to tell to us pricing of items at various discount percentages? Can’t retailers today just create signs in marketing efforts that state an easier messages? “Get your widgets for $4.99! That’s at a 66 percent discount, now!”

After the success of the McDonald’s quarter pounder, a different chain introduced a one-third pounder. It failed. People thought the quarter pounder was bigger.

Maybe it’s confusion, and maybe it’s just a case of the customer being numbed by the constant drumbeat of “savings.” There was a time, in the last century, when all a retailer had to do was put up a sign that said “Sale” and the customer responded. Now it’s a battle of the percentages and dollar discounts and BOGOs and the “buy more/save more” and…

I’m sure part of it is basic math skills, but it’s a lot harder these days to recognize real value versus marketing buzzwords. I always laugh when the words “new” and “save X percent” are used in the same sentence. Save from what? The price that you’ve never actually sold anything for? Gosh, thanks. I think most customers recognize legitimate value. And most customers experience their mind fogging when presented with yet another case of marketing sleight of hand.

Not addressed in the article was the prospect of shoppers being sent the “wrong” signals when percentage discounts get too lofty. When a retailer takes 60 percent – 70 percent off an item, past research (I have read or experienced first hand) tells us that shoppers often question the validity or the value of the base price (pre-discount) and/or wonder if the product is substandard or even defective. BOGOs appear to work well if applied to the right products (those that are consumed in quantities in a reasonable amount of time), but retailers and brands that require the shopper to buy more than two items in any group of items in order to get the discount are running the risk of asking the shopper to do too much work or math. Simple and consistent are the operable words when it comes to promotions.

Academic research has shown that consumers opt for BOGO more than percentage discounts, even if they are equivalent. The higher the percent discount, the increased likelihood of consumers selecting the BOGO deals. Other research shows that consumers purchase based on emotional response, supporting a BOGO structure over a more left-brain logical process involving numbers.

The question assumes retailers want an effective way to price message. Any of these tactics can mask a multitude of pricing sins. As to ethical concerns, prices should always be as transparent and easily communicated as possible, not so easy in America where an increasing number of people appear math impaired.

Reading this article yesterday I was truly depressed. In such a transactional retail environment, it’s truly pathetic that people can’t do math and that many retailers can’t be more effective at messaging price promotions. The easiest way to handle promotions is to show the net price as loyalty requires both transparency and making the customer experience better, aka easier.

This is one of those (rare?) examples where wording really matters — XX% of something is much different than XX% more than something, so some kind of standardization in how things are advertised might be nice.

But there’s a limit, and there will always be people who don’t understand things.

BOGO is most effective, although it needs to be spelled out since I am not sure if all shoppers know what BOGO means. Also, doing percent-off is a bridge too far.

While I was a retail buyer, I changed a promotional strategy from using percent-off to dollars-off. Hands down, the dollars off strategy performed better than percent off. Consumers have enough to think about at the shelf. Asking them to do math at point-of-purchase is a good way to get them to go think about something else.

I would surmise the fastest moving promo for merchandise is “free shipping.”. When looking at the product on their mobile device in the store customers can opt for the delivery option first. Not only does it remove a variable amount that customers don’t know, it locks in the current amount that they do.

Maybe customers don’t like to compute stuff in their heads, but the only real result is sticker shock at the cash wrap or not. The ethical point is moot as almost all retailers will allow the customer to leave their product at the register if they decide not to buy (incurring the restocking costs in terms of labor) because the price tally was too high.

"While I was a retail buyer, I changed a promotional strategy from using percent-off to dollars-off. Hands down, the dollars off strategy performed better..."

"Not addressed in the article was the prospect of shoppers being sent the “wrong” signals when percentage discounts get too lofty."