Are loss leaders a losing proposition for stores? 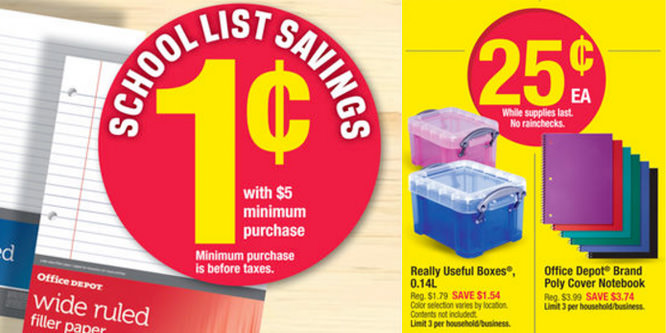 Many retailers this back-to-school season are highlighting loss leader deals in their circulars to drive store traffic. But the tactic is being met by a steady stream of articles and money-saving blogs teaching consumers how to take full advantage of the deals while avoiding offers that help merchants turn a profit during this important selling season.

“Retailers reserve these promotions strictly for in-store shoppers, because when you’re physically in the store you’re more prone to making unplanned purchases,” wrote Brad Tuttle on Money.com. “The trick for money-conscious consumers, then, is to stick to your shopping list and only buy items when they’re discounted.”

Among the deals for the current week:

Other articles and blogs likewise offer tips around maximizing back-to-school spending including warnings of limitations on offers and how to maximize the timing of such deals.

“We keep our eyes peeled for huge loss leader discounts, like boxes of pencils for a quarter or notebooks for a nickel or composition books for a nickel or rulers for a quarter,” writes Trent Hamm on thesimpledollar.com. “When we find those sales, we’ll buy two or three or five or ten of the item right now, knowing that we’ll be able to use them for the next few years during back to school time.”

“School sales generally go on four to six weeks before most schools get back in session,” wrote Ashley Eneriz on wisebread.com. “This gives you multiple opportunities to shop just the loss leaders of most stores.”

Wrote Courtney Jespersen, at NerdWallet, on usatoday.com, “It’s better to wait until inventory has been sitting on shelves for a while. Sales will swell in late August and early September.”

DISCUSSION QUESTIONS: Do you agree that cherry-picking consumers have diluted the effectiveness of loss leaders as a tool to drive traffic and sales for back-to-school? Do loss leaders still have a role to play in retail marketing or have their outlasted their effectiveness?

Please practice The RetailWire Golden Rule when submitting your comments.
Braintrust
"Loss leaders are good. Turning the whole store into a loss leader, not so much."

15 Comments on "Are loss leaders a losing proposition for stores?"

Loss leaders have been around forever, and smart retailers know the stores where shoppers are most likely to cherry pick. In the case of online, they know their names too!

They’ll always be a useful tool. What hasn’t been terribly useful are frenetic promotions tied to holidays or random “Take everything off everything in X” days.

Loss leaders are good. Turning the whole store into a loss leader, not so much.

If they didn’t work, retailers would drop them. Yes, there are a number of consumers who will cherry pick loss leaders and not make more profitable purchases in stores, but many more will want to save time and pick up extra items. Loss leaders still have a role to play in retailers’ promotional plans. They should be used judiciously, and plan-o-grammed with other full-price, must-have items.

I believe that loss-leader effectiveness has been diluted by cherry-picking but that the reality is that once a consumer is in the store, impulse and convenience will drive the sale. Back-to-school is not subtle in its loss-leader approach but other much more sophisticated techniques exist outside of this season and segment that are math- and technology-driven. This combination of analytics, technology and process ensure this technique will not die quickly and until it does the cherries are ripe for the picking.

There’s definitely a curve. Some take advantage of the deals and nothing more, others are lured in and then make the extra spend. Macy’s has always had a predictable range of sale discounts yet enough people have paid full price as well. Good pricing strategy and experience will find the right balance.

Loss leaders are smart and control the amount of merchandise in the store/on the website that is such a great deal. We will always have some dumb ones and they flip the whole store/website offering into a loss leader. They fade out. But the merchandising pros will always keep the loss-leader engine working and maintain or lift traffic.

Competition is tougher than ever in the retail business. More and more merchants widen their assortments to include categories that they didn’t have a year ago. With everyone selling everything, the effectiveness of these promos continues to be of at least some value to the retailers … Otherwise, why would they keep on doing them? The key is to always include better-margin items on the same page online and next to the dump displays in stores. Basic stuff, however I still see many retailers missing this simple step.

I agree with other panelists that loss leaders are useful in driving sales and store (or site) traffic. Anybody with a long memory (Gimbels, anyone?) knows that loss leaders have been around for decades, and the phenomenon of cherry-picking is at least as old as Black Friday circulars.

What’s different is shoppers’ ability to do their cherry-picking on their smartphones, but I’m still skeptical about the number of consumers willing to drive from store to store to save on pencils here, glue sticks there, and so forth — versus the convenience of one-stop in-store or online shopping. So these loss leaders are a calculated gamble that shoppers lured in by the giveaways will stay to fill their carts.

Loss leaders are important in driving traffic to retail stores because most retailers have done a terrible job of differentiating themselves from the category benefits that describe their market space. I find it interesting that Staples and Office Depot are throwing loss leaders at the back-to-school shoppers.

The article asks if shoppers are now savvy enough (with enough time during the back-to-school sales) to shop all the stores for just the discounted items.

Shoppers ARE more savvy than the office supply retailers for certain. Most have no idea which store they are in. They confuse one with the other. Office Depot and Staples look the same, promise the same and sell the same. The only reason for preference is location and loss leaders.

Until retailers invest in meaningful brands they will be forced to drive traffic through continued reliance on loss leaders, premiums and worn out ideas about affinity programs.

Loss leaders (and cherry-picking) have been and will continue to be a component of selling. This approach can also be adapted online to try to drive more online sales as well, although the rules of engagement there are a bit different.

First, there is a reason they call it a loss leader. Typically the retailer loses on the item. But it leads to more sales.

Second, there have always been cherry-pickers and there always will be.

All a retailer has to do is analyze their data and determine what price to use for their loss leaders, what’s working, what’s not, etc.

Nope. Cherry-picking consumers have not diluted the effectiveness of loss leaders to drive traffic and sales. People love deals and unless they’re off-the-scale disciplined, they’ll walk out with more goods than they had planned to purchase. Get the customer into the store or to your website and convert.

Despite the move to an “experiential economy,” price is an attention grabber. Once you have that, the rest of the marketing and merchandising plan and store execution need to kick in.

This is as basic as it gets in retailing and human psychology. It won’t go away, but might look different in the future.

Loss leaders turn profits when stores have a better knowledge of customer weariness than the customer themself. Stores need to bank on the customer that is an aspirational cherry-picker: This customer intends to purchase the Crayolas at Walgreens for 69 cents and then head over to Big Lots for the rest of their back-to-school shopping. They will take the loss leader and run. Unless at Walgreens they find school supplies for just fifty cents more in better brands, brighter colors, with modern innovation.

Loss leaders work when the rest of the inventory/in store shopping experience gets the customer to stay. The question isn’t the loss leader; it’s what’s keeping them in your store?

No offense, but if the advice offered is on the level of “stick to your list and buy only what’s discounted” I think its impact is nearly zero. (No one is going to win if you drive to a store just to buy a 25c pack of erasers.) A far more serious problem are online sellers — yes, including THAT one, where applicable — who seem to have nothing but loss leaders, as they don’t turn a profit … a problem this year, last year and likely the next.

Loss leaders still have a role to play in retail marketing — within reason of course. Individual retailers must run their own analysis on whether they are effective enough at driving add-on purchases. Especially for in-store promotions, convenience is still a factor. Are busy parents really going to want to run around to multiple retailers to only purchase items with these types of promos? My guess is that oftentimes, no.

Loss leaders are great simply because they get people into the store! When in the store, buying emotions take over and we often buy more than we planned as we all know. Even if these blogs are warning consumers against buying unplanned items, once in the store it’s a different matter.

Braintrust
"Loss leaders are good. Turning the whole store into a loss leader, not so much."