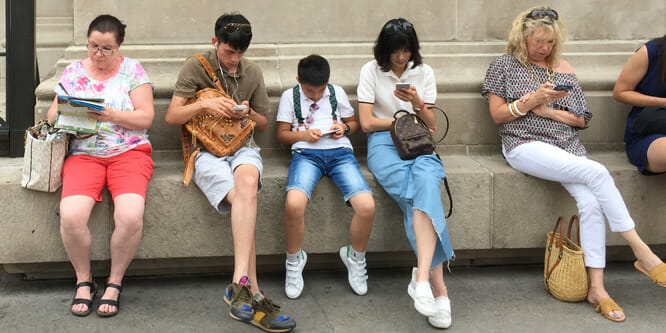 Through a special arrangement, what follows is an excerpt of an article from Retail Dive, an e-newsletter and website providing a 60-second bird’s eye view of the latest retail news and trends.

When a brand begins its search for the right influencer to partner with, the size of a potential following is usually the first rubric by which value is measured. But experts say that this formula doesn’t necessarily deliver results.

“The two main questions to ask for [when] forming a successful relationship would be, ‘Does this influencer share my values?’ And, ‘Are this influencer’s readers my target market?'” said Sam Cinquegrani, founder and CEO of ObjectWave, a digital marketing and services provider. “It’s not just about the size of the influencer’s following.”

A subset of influencers, called micro influencers, may prove more beneficial to retail brands looking to connect more deeply to their target clientele.

Ray Hartjen, director of marketing for RetailNext, said that these micro influencers, who have neither too few followers nor too many, may be the most valuable kind of influencer for marketers. But the concept, which seems counter-intuitive, can be a hard sell. “Many marketers get caught up in the vanity metric of the number of followers,” said Mr. Hartjen. “But repeated studies have shown that community engagement decreases as the number of an influencer’s followers increase.”

A celebrity with millions of followers might only get a one to two percent engagement on even their best posts, he said. By contrast, micro influencers might get close to 10 percent. “Because of scale, the big celebrity will bring in big numbers, even at a low conversion rate,” said Hartjen. “But they’re expensive. It comes down to a numbers and analytics game.”

Of course, influencers with substantial followings are still the goal for many retailers.

“Top influencers have audiences in the millions,” said Jeremy Shih, head of marketing at Mediakix. “Top YouTubers can get over five million views per video.” But Shih says there are benefits to both kinds of influencers. “Earlier in the year, we conducted a study between top brands who marketed concurrently with both micro and macro influencers,” said Shih. “[We found that] macro influencers may perform better for certain types of brands including beauty and fashion.”

DISCUSSION QUESTIONS: What factors should play the biggest role in the decision to work with influencers? What general advice would have around working with online influencers?

Please practice The RetailWire Golden Rule when submitting your comments.
Braintrust
"Wouldn’t it have seemed like a great idea to get Russell Simmons to hype your product a year ago? Then what?"

"Nothing will be more influencing than a product that can stand on its own merits, its own truth."

"If you can connect with enough small or “micro influencers,” you can create an army of evangelists!"

The whole notion of paying celebrities to hype your product as opposed to them endorsing it of their own accord is expensive, extremely disingenuous and risky all at once. Wouldn’t it have seemed like a great idea to get Russell Simmons to hype your product a year ago? Then what? You’re locked in. I’m for micro, the timeless way.

I know it’s old school, but in my opinion there is no better way to market your product than through quality, honesty, uniqueness and the always-difficult method of staying relevant. That’s your job! In the end, you’re always better off being yourself instead of someone else’s toy of the week.

On the mark Lee. And there is nothing “old school” about the truth!

In our work with specialty retailers, we’ve witnessed a higher lift in social media influence and online impact among brands working with micro-influencers. The most significant contributing factor is to identify an influencer whose followers/fans/readers best align with the brand’s core and ideal customer. In most cases, these will be micro-influencers. Savvy brands amplify ROI by working with a carefully curated set of micro-influencers rather than a single macro-influencer, then consistently monitoring social impact and modifying their set of influencers over time.

The fundamentals need to be in place: quality, value, service, etc. Thereafter, I think the focus on lift vs. engagement is right, whether at the micro or macro level.

Whether micro or macro, isn’t an “influencer” someone who is paid or otherwise rewarded for saying prescribed things about a particular product? They are not under oath to tell the whole truth and nothing but the truth, are they? Come on … we all know that when a Dr. Oz level of influencer “endorses” something, he is not doing that out of missionary zeal to bring salvation to humankind. We know the celebrity influencer has been bought off. There may be some evidence that a lesser influencer — someone we don’t know quite so well — might be given the benefit of a doubt. That maybe they are sincere and do believe what they say or write. At least that’s how it used to be. These days our default is to not trust what anyone says. Sad! Marketing of all descriptions is a process for convincing people that certain things are true. Whether the claims are true or not is another matter. Did the guy really cut the boat in half and then put it… Read more »
3
|
0
-   Share

The most important factor should be what/who the influencer’s demographics/audience are. Then research all the medium sized influencers. Check out how many likes they get on an Instagram post. Then check out how many comment their followers leave them on a daily post. It’s always a numbers game. Keep in mind lots of other people see their posts even if they aren’t followers. What ever you put on or in the hands of these influencers will sell off the shelf. But you must never try to make them what they are not. Most influencers will only represent a product, etc., that relates to them or that their followers won’t find strange that they are representing. It must feel like a natural fit for them. Remember, influencers today don’t want to look like sales people. You also must be open minded and let them have input regarding the content they are going to put out. They won’t want to turn their fans off, however you want your brand represented in the best way so keep communication… Read more »
2
|
0
-   Share

Consumers are becoming more and more weary of macro/celebrity endorsements so the value of micro influencers is increasing. These micro influencers are perceived as being more genuine and relevant to consumers and gaining more trust as a result.

A message spread to all is not a message worth spreading. Consumer bases have grown incredibly niche and spending the time to find the right influencer isn’t just important, but the key to a brand’s digital strategy.

Users and shoppers appreciate authenticity; users can tell pretty quickly if the influencer actually uses and enjoys the product, or is just cashing a check.

Most “influencers” are known in their industry, or by a group of peers. Many have large followings in social media. That said, why not make everyone feel as if they are an influencer? Work to make everyone who does business with you a brand ambassador. Be good enough that they will talk about you. Reward those that do. Nothing big. Maybe even just a little recognition. If you can connect with enough small or “micro influencers,” you can create an army of evangelists!

This might sound obvious and is not always easy to see from the surface, but the number one factor in choosing whether you use an influencer is whether they have true “influence.” Influence is very different from celebrity, reach, popularity and even engagement. Influence needs to create a desired action from the audience. Brands like apparel brand Revolve and watch brand MVMT do an amazing job of finding real influencers who are authentic to their target audience, are allowed to create content themselves and then monetizes that influence into purchase decisions. Two main pieces of advice. Find and test influencers big and small, but know what decision you are trying to influence. In most cases it is a product sale but could also be brand lift or others. Secondly, the day and age of influencers not saying they are getting paid for the post or received free product are going away so make sure you understand the advertising rules and make sure that the people you choose also understand the risks.
0
|
0
-   Share

Forget about the numbers! The most important factor that plays the biggest role when deciding to work with influencers is the kind of followers that a given influencer has. When hiring an influencer, micro or macro, always make sure that his/her following is relevant to the product or service you’re trying to market. We’ve seen so many influencer marketing campaigns fail because big brands have just taken into account the number of followers instead of their “quality.” The secret is choosing an influencer, even micro, whose followings share your product’s values and are interested in the product you’re trying to market. There are a lot of online tools out there that let you find the right influencer for your brand, based on their followers’ interests.

Conversations around influencer marketing typically assume the phrase means paying someone to endorse your product (this can be one dimension), and therefore they miss the core ingredient: forming authentic relationships.

Influencer marketing can be part of a broader marketing approach whereby you seek to build relationships with influencers in the space so that they grow aware of your product and come to talk about it on their own and when/if it feels right.

Additionally, “micro-influencers” are usually “macro” in their niche and, depending on the product/service, they can generate far greater and more targeted engagement than the famous celebrities we often think of as “influencers.”

The more targeted, the better: one of the core principles of modern marketing. If you reach 5 million people, but engage with few and even fewer are truly receptive to your message, than what have you gained besides a fleeting sense of satisfaction that you had great reach?

When it comes to influencers and advocates, it’s important to consider the context of what the brand is attempting to accomplish. Each group of influencers – macro and micro – has their own merits, and it’s important for marketers to clearly understand their own objectives and the needs of their target markets. If you’re looking for brand awareness and education, a giant influencer can bring that to you. However, if you’re looking to convert a consumer who is in the middle or tail-end of their path to purchase, a micro-influencer might be a better tool to deploy. For example, if you’re new to marketing cameras and want to build brand awareness, Taylor Swift might deliver you a lot of brand impressions. However, a great many of those individuals who receive her messages won’t care about cameras, but rather are more interested in following Ms. Swift for music, fashion, ex-boyfriends or whatever other reason. Conversely, if you’re looking to convert consumers who might already be aware of the brand and are deeper in their purchase cycles,… Read more »
0
|
0
-   Share

Braintrust
"Wouldn’t it have seemed like a great idea to get Russell Simmons to hype your product a year ago? Then what?"

"Nothing will be more influencing than a product that can stand on its own merits, its own truth."

"If you can connect with enough small or “micro influencers,” you can create an army of evangelists!"