Are Walgreens and Jenny Craig a good fit? 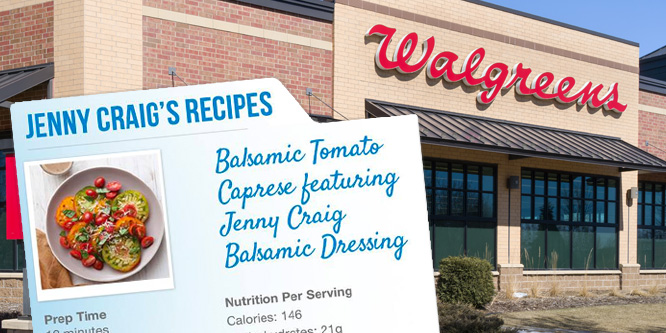 Walgreens announced earlier this week that it was working with Jenny Craig to bring its health and weight loss management services to 100 stores in 20 states across the country beginning in January.

Dallas, Houston, Philadelphia and Phoenix are among the markets that will get Jenny Craig at Walgreens locations, which will feature one-on-one consultations, customized menu plans and meal delivery. It is the first time the organization has partnered with a national drugstore chain in the U.S.

“We found Jenny Craig to be a strong fit with our shared mission to provide trusted, proven, and personalized care,” said Jim OConor, senior vice president, neighborhood health destination, Walgreens. “Jenny Craig at Walgreens will give customers the opportunity to interact face-to-face with Jenny Craig consultants, just as our patients have experienced for over a century with our pharmacists.”

“Jenny Craig and Walgreens are a natural fit with both companies focused on making health services — including weight loss — easily accessible, effective, personal and valuable to customers,” said Monty Sharma, CEO and president of Jenny Craig.

Walgreens, which also announced this week that it is getting out of managing company-owned health clinics in its stores as of Dec. 31, is looking for ways to work with third-party services to provide a variety of health services to its customers. The drugstore chain issued a press release stating it is turning over operation of seven clinics it currently operates in the Cincinnati area to TriHealth, a not-for-profit that operates six hospitals and 130 additional sites for health care.

Dr. Chet Robson, the acting chief medical officer at Walgreens, said the agreement with TriHealth was an example of the drugstore chain’s commitment “to offer convenient access to affordable healthcare services while helping to ensure a true continuum of care for our patients.”

Walgreens is not the only drugstore chain working with third-party service providers in its stores. Earlier this year, CVS announced plans to add Smile Direct Club’s SmileShops to more than 100 of its pharmacies following a successful 13-store pilot conducted by the two companies across eight states.

DISCUSSION QUESTIONS: Do you think Walgreens is on the right track working with third-parties such as Jenny Craig and TriHealth rather than offering its own in-house health and wellness services?

"Drug stores are becoming mini-malls of healthcare. Given a choice between a healthcare clinic and Jenny Craig, I vote for healthcare."

"I don’t think of Jenny as a wellness brand, but more of a weight loss brand. If so, that is specialized and less than what Walgreens might need."

8 Comments on "Are Walgreens and Jenny Craig a good fit?"

Walgreens is on the right track with partnerships like Jenny Craig. Jenny Craig is complementary to healthy living and brings brand power that will attract people to their stores. This is a classic case of build vs. partnering and, while partnerships can be fraught, when the fit is right they can be synergistic and impactful. Partnerships like these make perfect sense.

This aged like milk. I’m sure Walgreens definitely wasn’t kicking themselves for keeping clinics open for COVID instead of useless bloat partnerships.

A partnership between a drugstore and a lifestyle enhancing company makes perfect sense. So much so that speed in executing this strategy is critical. They can build nurture market share now versus taking the time to do it themselves. Smart. Pragmatic.

Drug stores are becoming mini-malls of healthcare. Given a choice between a healthcare clinic and Jenny Craig, I vote for healthcare. But I have to give Walgreens credit for choosing to partner with companies that offer services its customers want and need.

Walgreens has already added Kroger groceries to some stores to give consumers time savings and variety, including better-for-you private label options.

This isn’t a bad fit, but it does not and will not address the core issues at Walgreens. For years the company has expanded through acquisition – which paid dividends – but neglected its stores in terms of assortment, environment, and service. Outside of prescriptions, it is now struggling to maintain relevance and is not benefiting from the boom in beauty and health categories in the same way that rivals like Ulta and Sephora are. Looking for new areas to bolt on – like Jenny Craig and like the Kroger partnership – are sensible moves. But Walgreens in the U.S., and its Boots chain in the U.K., desperately need to get back to basics on the retail front.

Maybe it’s just me and the Walgreens I go into, but Walgreens feels a lot more down market and in need of a refresh vs. CVS and Rite Aid. I’m not sure that a co-branding/partnering relationship is the refresh that Walgreens needs. Also, I don’t think of Jenny as a wellness brand, but more of a weight loss brand. If so, that is specialized and less than what Walgreens might need.

Great fit (pun intended) and seems to also leverage the new partnership with Kroger. Walgreens is transforming to become a key partner to consumers looking to improve their health, weight, nutrition, and convenience. I’m excited to see what’s next and they continue to drive innovation that matters for their customers.

"Drug stores are becoming mini-malls of healthcare. Given a choice between a healthcare clinic and Jenny Craig, I vote for healthcare."

"I don’t think of Jenny as a wellness brand, but more of a weight loss brand. If so, that is specialized and less than what Walgreens might need."