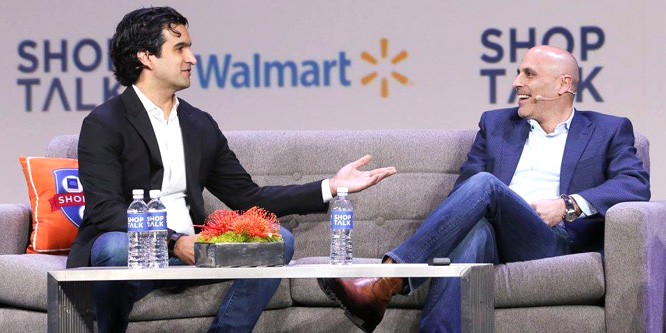 Walmart and Netflix have more in common than you might think.

That’s the position of Andy Dunn, CEO and co-founder of Bonobos, the Walmart-owned men’s clothing e-tailer and operator of 57 Guideshop locations around the U.S. Mr. Dunn sees parallels between Netflix’s start as a low-cost renter of videos delivered through the mail to a producer of its own award-winning programming and the Bentonville behemoth’s path from a low-price seller of everyday staples to the owner of distinctive brands that go well beyond anything that Sam Walton ever imagined.

“The realization is that Walmart, my boss Marc Lore and his boss, Doug McMillan, really see around the bend,” said Mr. Dunn. “And one of the things we believe is the future is not just about platforms, it’s about brands.”

To be sure, not everyone has seen the logic in Walmart acquiring distinctive brands such as Bonobos, ModCloth and Moosejaw.

In a June 2017, RetailWire discussion, several BrainTrust panelists questioned whether Bonobos, purchased for $310 million, was a good fit for Walmart. While Bonobos would provide access to new customers that never considered shopping at a Walmart, would the association with the big box retailer drive those very same people away?

Vendors of the businesses acquired by Walmart also have their concerns about the association. Just last week, it was reported that about a third of the brands initially included in the Premium Outdoor Store microsite recently launched on walmart.com want out. Those asking to leave expressed concerns about a devaluation of their brand’s equity, concerns about low-ball pricing from unauthorized sellers on online marketplaces as well as pushback from specialty outdoor retailers that have been the traditional channel for their goods.

DISCUSSION QUESTIONS: Does Andy Dunn’s analogy between Netflix’s originally-produced content and Walmart’s investment in brands hold up? Do you agree that the future of commerce is about brands and not platforms?

Please practice The RetailWire Golden Rule when submitting your comments.
Braintrust
"The future of retail is about both brands and platforms."

"Like Netflix does with movies, will Walmart now be producing its own products?"

"Relying on brands is risky in a future where brands have truly ubiquitous distribution in the physical and digital world."

The future of retail is about both brands and platforms, or as I distill it in my presentations, “platforms and portfolios.” For example, Amazon’s model was heavily weighted toward platform capabilities initially; the platform WAS the brand. Now Amazon is building out the portfolio side of the business through the creation of its own brands (with unprecedented scale and stealth) and brand partnerships. Amazon’s ownership of the platform gives it a killer advantage in promoting its portfolio. Walmart is pursuing a similar model although its initial platform consisted of thousands of stores paired with supply chain prowess. Now it is evolving into integrating its digital platform with its store network and, yep, now pushing forward on the portfolio side through acquisitions, private label revamps and partnerships, some of which are exclusive to digital. Jet.com was a platform acquisition, Bonobos arguably provided benefits on both sides of the platform/portfolio house. Subsequent acquisitions and partnerships are propping up the portfolio (that is supported by the platform(s)).

Yes, this is a Netflix moment for retail and consumer companies. Platforms are necessary but not sufficient to win big. In our context here, brands complete the strategic picture. They do so in an increasingly complex ecosystem of classical friends and enemies coming together to deliver new sets of values and benefits to consumers and participants alike.

Keep in mind that Mr. Dunn (and Walmart leadership) does not view brands and platforms as mutually exclusive determinants: “one of the things we believe is the future is not just about platforms, it’s about brands.”

As long as consumers continue to animate behavior through feelings and emotions, then brands will have center stage. Their ability to scale efficiently and profitably is more in line with access to and leverage of platforms and ecosystems organized around new value sets.

Walmart certainly considered the long game as they built up their digital and innovation segments. Competition is good for all of us, and the fact that Walmart stepped up to the plate, evolved with the Bonobos, Modcloth and other digital native acquisitions is a welcome sign that the brand is here to stay. Evolving with the times and trends is so significant these days and Walmart is no exception with their strategic moves. The future of commerce is truly a fusion of brands and platforms and not either/or. Consumers aren’t physically “going online” to shop as if they had a dial-up connection to ramp up like in the 1990s. They are on the go and engaging with retailers and brands in any manner they choose, whether it’s going to the physical location, pre-shopping from home from their mobile device, showrooming from one place to another — and they are ultimately purchasing the item in a digital or physical space. So there is a balance between the physical and digital platforms that has to be achieved.… Read more »
1
|
0
-   Share

IF you subscribe to the premise that a brand is a “promise kept,” then in a digitally-empowered landscape the platforms being developed and implemented enable, and will continue to enable, brands to define and maintain their promises to and for their customers. We’ll all remember the brands, but never know or understand the enabling platforms — yet they won’t survive without each other.

In a digital shopping environment, without a platform, a brand cannot scale. Without branded product matching the needs and preferences of the intended customer, a platform will not scale. All influenced by subterranean technical and product-driven variables. As far as Andy Dunn’s analogy, my last check shows Walmart filled with lots of generic, private-label type products. Does that make his analogy a view into the future of new Walmart private brands a la, Amazon? Like Netflix does with movies, will Walmart now be producing its own products? 🙂

Relying on brands is risky in a future where brands have truly ubiquitous distribution in the physical and digital world. What Netflix, HBO, Hulu, etc., prove is that content generation is the only way to guarantee true product differentiation. Does that build brands? Of course! But it builds them in a different way — not by leading with a glitzy headline and then backfilling a story, but establishing a foundation of content and wrapping a brand around it.

The brand IS the business. And business is conducted via the platform. Retailers need both to succeed.

I’m not sure Andy Dunn is drawing the right comparison to Netflix. The “Netflix” moment we should be analyzing is their transformation from physical media to streaming content and then to creating content. So what is the analogy for Walmart? It’s more than platform vs brand — everything is a platform today. Brands need to treat product as content and look at new ways to create in order to build a lasting, memorable experience with customers. Without a core platform, there can be no scale, but it’s the content that remains king. This is Walmart’s way of becoming a slightly different kind of “everything store” than Amazon. Other brands can also learn from this, but each brand has to find their own way to scale and grow — not every brand needs to emulate Walmart or Amazon.

Braintrust
"The future of retail is about both brands and platforms."

"Like Netflix does with movies, will Walmart now be producing its own products?"

"Relying on brands is risky in a future where brands have truly ubiquitous distribution in the physical and digital world."