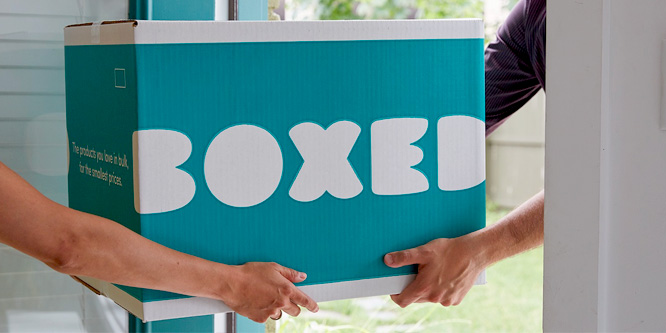 It has been a couple of years since the press was buzzing with news about what might become of successful warehouse-style e-commerce startup Boxed. Now, after an unprecedented shift in the e-commerce landscape due to the novel coronavirus pandemic, the company is going public.

Boxed is merging with a special purpose acquisitions company called Seven Oaks Acquisition Corp. in a deal that will result in a publicly traded company, according to Supermarket News. With the capital it will generate through the deal, the e-commerce company plans to expand its B2B and third-party marketplace offerings and monetize its software-as-a-service platform, which facilitates home delivery.

Beginning in March 2020, Boxed experienced a sudden, massive demand for its services driven by the pandemic. Boxed had initial trouble managing orders for hoarding-prone items like toilet paper, hand sanitizer and wipes, according to a CBS This Morning interview with CEO Chieh Huang. In addition to increased consumer demand, municipalities local to Boxed’s fulfillment centers also began leveraging the company at the height of the crisis.

Mr. Huang told CNBC Squawk Box In November 2020 that Boxed had experienced changes in both customer demographics and how customers were accessing the service. By that point in the pandemic, the user base had expanded from Millennials in coastal cities to people in the suburbs and rural areas. It also saw a 30 percent increase in mobile app usage.

Boxed was promoted as an online wholesale club alternative when Mr. Huang launched out of his parents’ garage in 2013. The company reached $100 million in sales within three years, according to a 2017 CNBC Make It article.

In 2018, during an era when major brick-and-mortar grocery retailers were getting serious about building out their e-/m-grocery presence, a number of big names were reportedly eyeing Boxed for acquisition. Kroger was named as a top bidder, with Aldi, Costco and Target also on the list.

Around the same time, Mr. Hsieh began speaking publicly about the possibility of the startup opening its own brick-and-mortar stores to complement its online presence.

DISCUSSION QUESTIONS: Do you see a path to profitability for Boxed? Will the company’s B2B, SaaS and marketplace offerings deliver the growth that investors and analysts will demand of it as a publicly traded company?

Please practice The RetailWire Golden Rule when submitting your comments.
Braintrust
"I personally believe that the momentum accelerated during the pandemic can sustain the company's continued growth."

I have my doubts when it comes to Boxed achieving profitability, even though the concept of buying in bulk online a la club stores will clearly appeal to some online. One challenge I see for Boxed is pricing. Yes, it can tout not charging an annual subscription fee to differentiate itself from Costco, Sam’s and BJ’s. On the other hand, it has to make up margin dollars created by subscription fees by charging higher per-unit prices. Consumers inclined to buy in bulk are likely already doing so from the warehouse clubs, Amazon and others. Price is a key factor and it’s not clear to me that Boxed has made a factually compelling case for its selling proposition. A potential answer for Boxed is to begin opening stores of its own in target markets around the U.S. as informed by its online sales data. Store pickup and even local deliveries can help reduce fulfillment costs and, if successful, prove a more profitable means to serve customers. Whether this would happen at Boxed as a publicly traded… Read more »
2
|
-1
-   Share

The Boxed story continues its amazing record of success. Keys are a tech-first approach, subscription model, focus on customer satisfaction, focus on company culture, working hard to create an engaged workforce, expanding at a controlled rate, and a visionary founder. This is a retail company easy to root for.

First and foremost, founder Chieh Huang has remained focused. This, coupled, with the company’s intentional dedication to Boxed team members, its customers, and the community make for what should be a winning formula.

I personally believe that the momentum accelerated during the pandemic can sustain the company’s continued growth.

Online grocery is booming and Boxed is already an established incumbent in the space. They are doing all the right things to drive down cost, like cutting out the intermediaries, automation in fulfillment, etc., but also creating additional profitability drivers like retail media and business deliveries. I think it will be an additional few years before they gain scale of operations and achieve profits.

It’s hard to imagine something more generic than this, the claim of a “differentiated e-commerce model” notwithstanding. As such, success will depend on having the right people, making few — if any — mistakes, and a certain amount of luck. I wish them well, but it’s not a bet I’d make.

Braintrust
"I personally believe that the momentum accelerated during the pandemic can sustain the company's continued growth."