Can a grocer build a business on the keto diet trend? 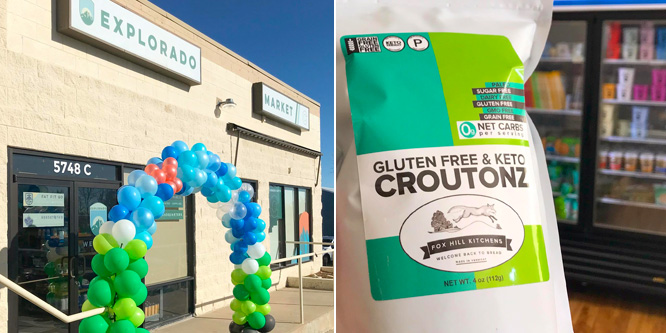 Dieting trends may come and go, but a grocery store in Colorado expects ketogenic eating to stay around a while and is finding success by building its assortment around keto products.

The mom-and-pop store, Explorado Market, launched its brick-and-mortar location in 2018 and has experienced month over month exponential growth since then, according to the company.  Before launching the store, the grocer’s founders opened a production facility to create its own line of keto-friendly products, which it now sells both in-store and online.

According to Explorado Market co-founder Rob Benson, traditional grocers stocking keto products are unable to keep up with the demand from customers, and some of the products themselves can’t scale due to ingredient costs, necessitating a keto-only grocer for adherents to the lifestyle.

The past decade saw a boom in wellness-focused grocery products — though there’s an ongoing debate about what actually constitutes healthy food. Both high-fat/low-carb diets like keto and lower-fat, higher-carb animal product-free diets like veganism, while in some cases at odds with one another nutritionally, have grown more mainstream. USA Today rated them as two of the biggest wellness trends of 2019.

Customers even expect their snacks to be healthy now, or at least to conform to whatever restrictions they are imposing on their diet. While better-for-you snacks were once primarily produced by independent vendors, big CPGs have been trying to get on top of the trend — in some instances through pricey acquisitions of vendors already popular in the space.

With the mainstreaming of health food products has come shifts on the specialty end of the grocery spectrum as well.

In 2017, around the time it was acquired by Amazon.com, Whole Foods began introducing numerous changes that seemed to be pointing the chain away from its more eclectic selection of products from small, local vendors and more towards stocking brands from the big national CPGs. The chain switched its buying model to a more centralized one and later introduced slotting fees, which would make it more difficult for smaller vendors to get on the shelves.

Please practice The RetailWire Golden Rule when submitting your comments.
Braintrust
"You can't build your business on fads. Keto is hot now. Atkins was hot yesterday. Something else will be hot tomorrow."

"I hope the grocery store can pivot quickly or at least have an exit strategy when the keto trend fades. No single trend has lasted with the exception of organic..."

"Build your business on providing options and information to your shoppers – that’s a long-term strategy that won’t change soon."

11 Comments on "Can a grocer build a business on the keto diet trend?"

While I would strongly encourage grocery retailers to expand their assortments to be more inclusive of “fringe” trends like keto (even though keto has certainly reached more than fringe status today), I would caution against building a brand on one trend. Despite many claims to the contrary, I suspect that keto is not a healthy long-term lifestyle choice, and just like Atkins and South Beach and all the others, soon keto will be replaced in the health-food zeitgeist. This debate points to a need for greater emphasis on careful assortment planning to develop product lineups that reflect and respond to shifting diet trends, not to the need for trend-specific stores.

I personally do a variation of the keto diet. But at the end of the day it is one of the product categories, just like diabetic diet products, fitness and other nutritional products. Walmart has a keto aisle now, retailers like Vitamin World probably will carry a more extensive selection, and there may even be a store or two exclusively selling keto products. But having an extensive keto chain is a stretch, and likely not sustainable.

Keto items on the grocery stores shelves have been around for a long while – what I have seen over the past year is the section growing in stores, some in their own planogram and some as an extension to a current line. Specialty distributors will eventually catch up with the demand and some will develop choices in the private label arena.

No single diet trend has yet proved sustainable at retail. If the demand is large enough and sustained long enough, the key elements of the diet will inevitably be incorporated into and absorbed by major CPG manufacturers and retailers. Small specialty retailers may flourish for a short while, but inertia will have its day. Just ask the specialty CBD retailers who now find their products available at gas stations and c-stores.

You can’t build your business on fads. Keto is hot now. Atkins was hot yesterday. Something else will be hot tomorrow. All these diets are based on silver bullets to solve a problem that just plain good nutritional and eating habits will solve.

Low-carb diets in general have been, and will most likely continue to be a mainstay for healthy eating. If “keto” is trending today, another fad will take over tomorrow, however inevitably low-carbs will be the key ingredient to the diets of the future. Grocers and CPG brands are smart to jump on this train to provide fresh alternatives to consumers.

Grocers need to be inclusive and open to new thinking: keto, CBD, etc. But don’t try to build a business on one of these – there’s a good chance that none of what’s popular today will be around in six months. Build your business on providing options and information to your shoppers – that’s a long-term strategy that won’t change soon.

I hope the grocery store can pivot quickly or at least have an exit strategy when the keto trend fades. No single trend has lasted with the exception of organic and even there the leader in that category got knocked out as other retailers added aisles and nipped off the profitable sub-categories.

In the broadest of terms — no pun intended — dieting is ultimately about eating less. Grocery stores are about selling food. It doesn’t seem like a good marriage, at least for it to be your whole business.

Having attempted (not always successfully) to follow a keto diet, I certainly understand the unmet need and desire to cater to this eating lifestyle. However, as stated by others in this forum, building a business around one particular diet is dangerous at best. Now, if a grocer (or other retailer) wants to address the needs of shoppers searching for low-carb options, use in-store messaging and wayfinding techniques. The details on a typical label are far too small and bringing the low-carb content to light is a missed opportunity. Speaking of missed opportunities and as a frequent traveler, airports are absolutely horrid at helping anyone manage their eating restrictions. If I had a willing partner, I’d invent a solution to this conundrum tomorrow!

Braintrust
"You can't build your business on fads. Keto is hot now. Atkins was hot yesterday. Something else will be hot tomorrow."

"I hope the grocery store can pivot quickly or at least have an exit strategy when the keto trend fades. No single trend has lasted with the exception of organic..."

"Build your business on providing options and information to your shoppers – that’s a long-term strategy that won’t change soon."