Can a new store concept jumpstart a turnaround for H&M? 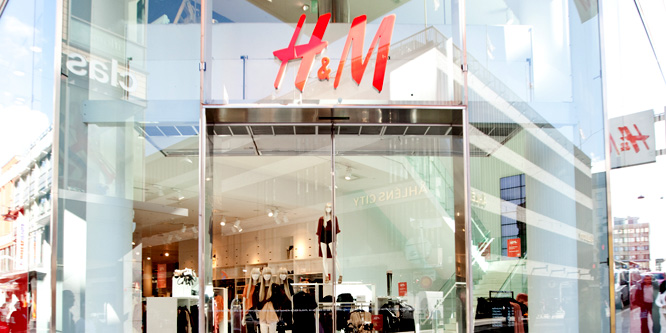 In less than a decade, H&M has gone from the top of the burgeoning fast fashion world to a flagging retailer in need of a turnaround. The retailer is hoping that a new store concept, which it is piloting in its home town of Stockholm, Sweden, will get it back on-trend.

The concept features a smaller clothing selection and a cleaner, more organized layout, with some products grouped together by color, according to Reuters. The store also features a product mix tailored to the more upscale tastes of the local residents of the particular neighborhood in Stockholm where it resides. There’s an in-store espresso machine, spacious changing rooms, wooden floors and a café corner, leading one visitor to describe the pilot store as “like a luxury brand.”

Though H&M has been losing steam for a while as it has been outmaneuvered by new fast fashion competitors, things took a decided turn for the worse in 2017 when the chain reported its biggest quarterly sales drop in two decades, according to The New York Times. Early this year, H&M reported a $4.3 billion glut of unsold inventory, raising questions as to whether it still had the product mix customers were looking for.

Around the time of the announcement of its problem with unsold inventory, H&M launched Afound, a deep discount concept dedicated to clearing out excess stock from the retailer and its sub-brands.

The revamped pilot on display in Stockholm, however, is taking the opposite tack from the Afound concept. Rather than doubling down on the chain’s image as a cluttered discounter, H&M is focusing on tailoring its main line of stores to the more upscale audience it has already begun courting with other chains it has launched, like COS and Arket (some of which have no U.S. presence).

The company is planning on taking the localized product mix strategy to H&M stores beyond the Stockholm pilot, according to Reuters. It is not clear, however, how many of the chain’s more than 4,000 main brand stores this will impact or to what degree the product lines will vary in different markets.

DISCUSSION QUESTIONS: Will a cleaner look and localized assortments help reverse H&M’s downward slide in the U.S.? What is most necessary for H&M to change to regain an upward sales trajectory?

Please practice The RetailWire Golden Rule when submitting your comments.
Braintrust
"The key is their change to assortment and providing inventory that is tailored to local markets at competitive prices. That change provides some optimism for their future."

"I hate to say it but Zara is the new H&M. Although stores like those for me personally seem overwhelming with way to much stuff to dig through."

11 Comments on "Can a new store concept jumpstart a turnaround for H&M?"

H&M’s problem hasn’t been its stores, but rather a sluggish supply chain that deposited sweaters in stores in June. That said, a refreshed store is a happy store, and the idea of a curated assortment (with a nod to Zara) sounds very appealing.

I agree with Cathy — a nod to Zara is a good idea for H&M. Like Zara, H&M used to be fun and current. Shopping Europe, H&M was always on the list. In the past decade there has been a slow decline to poorly made, uninspiring inventory shoved on racks.

This is a sensible strategy and is aligned with consumers wanting more edited choice. However, it is hard to see how H&M can execute this. Many of its existing stores, in the U.S. and elsewhere, were built for volume. There is a lot of space to be filled and while merchandise and assortments can be improved, paring them back is not a viable option if the economies of the store are to work.

Also, while there is a definite trend towards people being more considered in apparel buying, fast fashion is still alive and well at companies like ASOS and Primark. Unlike H&M, which churns out very samey product year-in-year out and appears to lack any real area of focus, both companies have distinct fashion themes and are better at following trends. H&M need to get back on that same track if it is to recover.

While the look of a store is important, shoppers purchase products and services in stores — not the store. Shoppers — particularly in apparel — are fickle and very particular. Combine this with the expectation of immediate gratification and H&M needs to be ahead of the curve in trends and inventory with their customers. This is a challenge for any physical retailer — and once again we’re back at the inventory and supply chain challenge. We seem to always come back to this issue!

Localized assortments will always help. But to be clear, this was not a physical plant problem. This was a human problem. A skill problem. A merchandising problem. A supply chain management problem. New store formats, espresso machines and fixtures solve exactly zero of those problems. And colorizing the assortments is different than color management. Sure, they should be serious students of Primark and Zara. And a refresher course on basic open-to-buy math is also recommended.

It’s no secret that success in retail means giving shoppers what they want, but the trick is figuring out what that is. This move by H&M is a step in the right direction, but they’re not going to turn things around just based on in-store perks like espresso. The key is their change to assortment and providing inventory that is tailored to local markets at competitive prices. That change from H&M provides some optimism for their future.

I applaud H&M for being aggressive in new growth strategies. Some things are very hard and risky in operating a large chain, such as: “The company is planning on taking the localized product mix strategy to H&M stores tailored to the more upscale tastes of the local residents of the particular neighborhood.” Sounds great. Be careful!

I hate to say it but Zara is the new H&M. Although stores like those for me personally seem overwhelming with way to much stuff to dig through. I honestly don’t ever go in them. I like the clean fresh concept where we can see the clothes on smaller racks and more boutique looking. Example: Flight 23 stores. Lots of sporting goods stores are going this way. Gen Zers are drawn to the look and feel of the stores’ easy flow. Being a generation of ADHDers we need to get in, buy and get out. We aren’t searching through 30-foot racks to find something we like. My idea of a perfect store — all the mannequins are wearing the clothes. On Saturday I actually bought a sweatsuit right off the mannequin, no searching involved!

I was just in an H&M last night and would not describe it as a place where people with “upscale tastes” tend to shop. Customers in this store were predominantly high school kids and moms shopping for kids clothing.

There are big branding changes going on with H&M’s new store concept. Adding an espresso machine, larger changing rooms and a café corner to a store that’s known for $19.99 tops does not make it a luxury brand. If H&M has been losing steam it might also look at its confusing merchandising and lack of store associates who interact with shoppers. This transition will be interesting to watch.

Without getting too far into the weeds, H&M’s product offerings reflect a design and production team with a lack of vision and expertise. Fast fashion does not mean shoddy patterns, lackluster production and cheesy fabrics. H&M needs a reboot.

Hire skilled merchants, designers, patternmakers and production people. I can see how H&M got in this mess, throwing product at various factories. Great product at all price points takes a committed global design and manufacturing effort of developing brand standards and adhering to those standards. Interestingly funny, I have found over the years that vertical retailers resist the effort to utilize and deploy apparel design and production best practices.

Knowledgeable apparel geeks can execute great product at the same H&M price point. I do not believe in-store cafes will lift H&M’s sales.

There is a reason that H&M experienced a $4.3 billion glut in unsold inventory, and it wasn’t a result of store layout. It was a merchandise planning issue. Unsold merchandise is result of poor product selection, pricing or forecasting.

Oftentimes, the product selection is the biggest problem, especially in the trending fast-fashion category. When fashions change quickly, merchants need to stay up on the latest trends and have a nimble distribution network that adapts to the latest trends. If H&M doesn’t address these issues, they may have cool new stores with unsold inventory.

Braintrust
"The key is their change to assortment and providing inventory that is tailored to local markets at competitive prices. That change provides some optimism for their future."

"I hate to say it but Zara is the new H&M. Although stores like those for me personally seem overwhelming with way to much stuff to dig through."