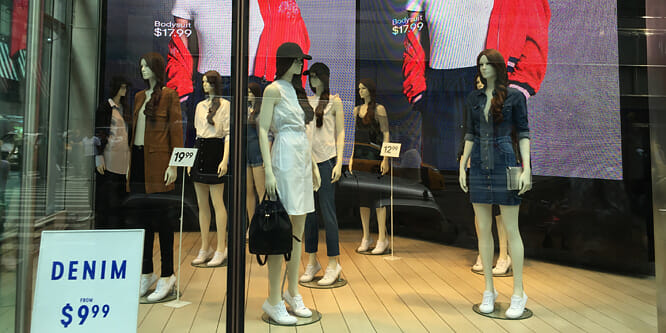 H&M, once at the top of the fast fashion world, has fallen on hard times. In the face of big challenges, the chain is launching a new store concept — one with even lower prices.

The new H&M concept, called Afound, will be a chain dedicated to clearing out the excess stock of H&M and other companies, according to Bloomberg. One problem H&M has experienced that may be contributing to its difficulties has been an inability to shake stock that is past its prime and didn’t sell in-season. H&M’s sales have dropped 40 percent in the last year.

Sources also cite an inability to thrive at e-commerce as being another reason for H&M’s fall from grace.

A press release from H&M describes the Afound concept as a “style- and deal-hunting paradise” and mentions that it will have an online marketplace component in addition to physical stores.

Despite the success of apparel retailers like Macy’s and Nordstrom with off-price concepts, Business Insider and others see the already low-priced H&M’s attempt to go even lower a sign of trouble.

Coming off a weak year, H&M plans to close 170 underperforming stores in 2018, according to Reuters. It will, however, open an additional 390 stores, fewer than it has opened in past years.

H&M is no stranger to rolling out new brands and store concepts. The chain owns seven brands besides the main one — H&M Home, COS, & Other Stories, Monki, Weekday, Cheap Monday and Arket. At least some of the brands have their own standalone brick-and-mortar presences. COS, for instance, has a limited number of U.S. locations (and many international locations) in addition to offering online sales. Some of the others have stores throughout Europe and abroad.

Even as it moves into off-price, the company recently announced the rollout of a brand called Nyden, Refinery 29 reported. The brand is an “affordable luxury” apparel brand targeted at Millennials and will be available, at least initially, through e-commerce and limited pop-up events.

And the company plans to roll out a “more enticing” version of the main H&M store concept in 2019, according to Reuters.

DISCUSSION QUESTIONS: What are the root causes of H&M’s recent difficulties? Will opening a concept with deep discounts on its own and other companies’ overstock help H&M get back on track?

Please practice The RetailWire Golden Rule when submitting your comments.
Braintrust
"Streamlining their business and figuring out their true identity will solve the real problem. "

"This is a great new model for H&M because it matches how shoppers are already treating them — a bit of a bargain hunt for something cool."

"H&M lost it’s way about eight years ago. It was a slow decline from what once was, better made, less commoditized apparel..."

13 Comments on "H&M hopes ‘Afound’ will bring a rebound"

It’s ironic that the brand that virtually invented fast fashion is suffering from the impact of a weekly fashion cycle. Fashion is fickle, and it’s clear that H&M is not immune. Opening a deep discount concept to deal with overstocks seems like a prudent move given the amount of unwanted apparel that they produce. It’s not a game-changer, but a reasonable strategy.

Agreed, it’s a reasonable strategy. It helps deal with the problem, but it does not solve the problem. It’s unfortunate I cannot attach copies of pictures taken in H&M a couple of days ago. Boring product with shockingly lackluster presentation. It was a sea of racks with sales signs everywhere. It was as though they took notes at their USA department store neighbors down the mall (a severe condemnation in my mind). Then I would post pictures of Primark. Fun, colorful product with good to outstanding presentation. Just like Nordstrom and Macy’s, H&M can make good use of a clearance platform, but it has nothing to do with solving their core problem.

The root causes of not only H&M’s challenges but also the whole fast fashion segment is that there is simply too much retail and product saturation in the marketplace. While retail has had a resurgence over the past few quarters, the fast fashion segment was growing at such a phenomenal rate that an eventual drop or correction was inevitable.

Retail over-expansion has been a reoccurring problem in recent years, and apparently even the fast fashion and affordable luxury areas are not immune to this challenge. H&M is wise to close under-performing stores and invest in additional locations that are in prime metropolitan neighborhoods. Additionally, H&M and other fast fashion leaders may look into assortment curation, and take a less-is-more approach with their go-to-market strategies.

There is no doubt that H&M had its day with a fast-growing business and for a time they looked unstoppable. However too many stores, too much sameness with their products and not enough identity standing aside from the other “me too” competitors are the reasons I see the chain struggling today.

I think H & M would do better streamlining their business, focusing on core products, what makes them different from their competitors and why customers should shop them. Opening another brand with deep discounts will only give some short-term success, if that, because customers today have too many choices. So my advice to H&M is to be different, be a leader and stand out as the brand the customers will want to shop — not just because of the price but because of the fashion and the value. If H&M does that, it will find more success than just being another specialty apparel store.

H&M lost it’s way about eight years ago. It was a slow decline from what once was, better made, less commoditized apparel designed and executed with an H&M point of view. Early on H&M had a hip vibe, actually competitive with Zara. Today, they have rounders and racks of poorly executed apparel and blase basic items surrounded by a hodgepodge of one-off tributes to a current trend. Will Afound be competing with dollar stores? I used to be excited to shop H&M.

I’m not sure that another off-price brand in an increasingly overcrowded market is a long-term solution to H&M’s problems. They need to address a few core problems in their existing stores first, as the article points out:

H&M stores have always avoided the chaotic, “treasure hunt” feel of a typical Forever 21 store — and with a bigger focus on basic, affordable “wear to work” apparel for budget-minded shoppers. But this has come at the cost of becoming boring and predictable, compared to Zara’s unbeatable speed to market.

It seems like a tactical move to more efficiently sell or rather get rid of excess stock that is unavoidable in the fast fashion business. Since excess stock directly impacts profitability this move makes sense.

Opening up an off-price branch for overstock will help bring in more revenue for H&M. But it doesn’t address the core problem. Accurate trendcasting and manufacturing is a better solution. Streamlining their business and figuring out their true identity will solve the real problem.

As far as their e-commerce difficulties, H&M was really late to the party. They didn’t launch an online store in the U.S. until (I think) 2013. They just never really caught up.

Overall, it feels like H&M is trying to do too much too late. They have an overwhelming selection of products and many different brands and offshoots, such as their new Conscious label. Add in an off-price sector and a high-end line and it seems like H&M has simply lost their identity.

The H&M business model was predicated on running out of inventory. It added urgency to a customer making a purchase now rather than waiting for a price reduction. Afound may solve the problem of clearing left over inventory, but it doesn’t address the problem of a now broken business model. Without addressing that, there will be no success.

There’s clearly some style/supply chain issues at the heart of H&M’s troubles. The Afound banner seems entirely focused on solving the symptom of having leftover inventory, which will give them incremental improvement at best. They’d be better served to look at and solve for the source.

Afound is an interesting concept. However, it does not address the causes of H&M’s slide – it merely provides some relief from the symptoms. And that relief may well be temporary if Afound cannibalizes sales from H&M and its other brands. The biggest problem for H&M is that it has overexpanded into saturated markets at a time when the fast fashion model is starting to unravel. H&M exacerbates this issue by having stores that are often too large and where stock changes too infrequently. This makes it very difficult for customers to identify the latest trends or additions which dissuades them from visiting and buying more frequently. In terms of design, recent collections have also been less than compelling. On top of this, H&M has been slow with e-commerce and has a proposition that is less than compelling across many of the markets in which it operates. That means it misses out on an area of significant growth. Without addressing these core issues, H&M will struggle to get back on track, no matter how many… Read more »
2
|
0
-   Share

The Bible tells us “he who liveth by the fad dieth by one”…well, it was someone, anyway; I probably shouldn’t venture into fashion, but here goes:

This is a great new model for H&M because it matches how shoppers are already treating them — a bit of a bargain hunt for something cool. Being able to hunt through their older stock and the excess stock of others will make it even more fun. Just as dollar stores are dominating right now, discount clothing stores can do well too — they just need to adopt the mindset that it’s not about being cheap, it’s about the hunt for that awesome item.

Braintrust
"Streamlining their business and figuring out their true identity will solve the real problem. "

"This is a great new model for H&M because it matches how shoppers are already treating them — a bit of a bargain hunt for something cool."

"H&M lost it’s way about eight years ago. It was a slow decline from what once was, better made, less commoditized apparel..."