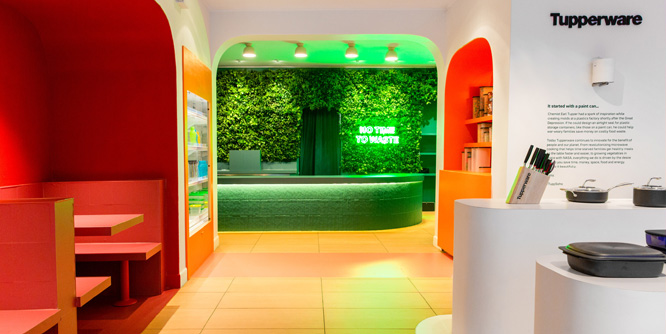 For decades, Tupperware was the hottest multi-level marketed line of products around. How many younger generation Americans, however, are as familiar with the brand today? Tupperware is trying to get the party started once again, with a holiday pop-up in New York City’s Soho neighborhood.

The pop-up — TuppSoho — will run until December 22nd and features hands-on product demonstrations and Instagrammable installations customers can experience while shopping the Tupperware line, according to a press release. The pop-up comes in conjunction with the launch of a redesigned tupperware.com website.

Tupperware was a booming brand in the 1950s and 1960s in the U.S., with Tupperware parties — where women met to demonstrate and sell product lines of the reusable plasticware — becoming an iconic fixture of the post-war middle-class suburbs. Tupperware’s popularity began to diminish in the mid-’90s, however, with a stigma developing around the multi-level direct selling model that made brands like Tupperware and Avon household names.

The 2010s have been rough for the brand, although the publicly-traded company’s stock did experience a spike in 2013. This may have been driven by an initiative to drastically expand the company’s international presence, especially in Asia and Latin America, begun by CEO Rick Goings (who took on the role in 1997). Mr. Goings retired in 2018 and was replaced by Patricia A. Stitzel.

Last week it was announced that Ms. Stitzel had stepped down in the wake of the company’s most recent earnings miss and was replaced by interim CEO Chris O’Leary, according to Marketwatch.

Despite the C-suite shakeups and sinking stock performance, there is a possibility that it could be the right time for Tupperware to bounce back. Given a consumer shift away from single-use plastics, Tupperware’s reusability could offer a classic take on a new trend.

Reduction of single-use plastics is mentioned as a selling point that visitors to the TuppSoho pop-up will encounter, according to the event’s press release.

Tupperware will, however, have some stiff competition. While once a leader in reusable containers, there are now countless brands offering similar products, available through direct sale, e-commerce marketplaces and retailers.

While Tupperware products are available for purchase on its website, company sales are still geared towards setting up representatives to host parties.

DISCUSSION QUESTIONS: What will it take for Tupperware to reinvent itself for a new generation of American consumers? How can the brand build on the attention given to the pop-up in Soho?

Please practice The RetailWire Golden Rule when submitting your comments.
Braintrust
"Unless they re-imagine social selling for the 21st century, just reviving the marketing and sales model of the pre-internet era is unlikely to work."

"This can absolutely work, Tupperware is capitalizing on the coming trend of the ’50s and ’60s making a huge comeback."

"Anyone remember the Tupperware Blues song? Finding a way to teach good food storage is about controlling food waste. I don’t care how they do it..."

14 Comments on "Can a Soho pop-up relaunch Tupperware’s party?"

Tupperware gets full points for effort, but I’m not sure this latest effort will change consumers’ minds. Opening a pop-up in Soho sounds cool – and it kind of is – but it’s only one small (temporary) store in a very big world. I work with a retailer who attempted the very same strategy by opening a pop-up in Soho and they spent a ton of money on it, with no ongoing benefit or impact. The new Tupprware website is a good start to getting the business back on track, and the pop-up is an interesting “marketing event,” but Tupperware’s challenges are more substantial.

There are two issues for Tupperware. The first is that the brand name is seen as old-fashioned and it, therefore, does not capture attention like it used to. The second is that there is far more competition than there was in Tupperware’s heyday. You have innovative companies like OXO and Joseph Joseph doing creating things in kitchenware, and you have all kinds of brands and retailers churning out basic containers at cheap prices. Tupperware needs to rebuild interest in its brand and provide consumers with very innovative gadgets and solutions. The pop-up will help with this, but it is a drop in the ocean in terms of what needs to be done.

It’s Tupperware for goodness sake — now available on Amazon alongside hundreds of lookalikes. I doubt a pop-up will move the needle. I’d think they’d have more luck going after home food delivery distribution offered as an upgrade for a fee to reduce delivery waste, and to keep those Grubhub leftovers better stored for that inevitable reheat.

My daughter introduced me to the world of BPA free, eco-friendly Tupperware alternatives and, frankly, I have never looked back. That being said, I would be open to buying Tupperware products (the brand is part of my childhood after all) if I knew they had evolved, and knew where to buy them.

So Tupperware parties. Most of us run from any kind of product party, and having to decide which mercy gift to buy so we don’t insult the hostess. Tupperware’s Soho pop-up to introduce new customers to its products is a great idea, it’s just not enough. You can’t expect consumers to find, let alone buy, a product that’s nearly invisible across most of the country.

A pop up, this time of year, and the press that comes with it, will certainly help. Two things: 1.) a sense of humor (think Old Spice) works really well in changing brand perception and 2.) great, modern advertising (think Target) also goes a long way toward changing what young people think of a brand they never really thought about.

And of course, some solid, innovative product development needs to come first (which it looks like they’ve done some of). I like the effort — I could use some of that stuff!

What was an innovative brand in the ’50s and ’60s (with an innovative distribution network to boot), has become a commodity product, alongside competing brands like Rubbermaid. It suffers from the same “old” perception as legacy brands like Kellogg’s and Campbell’s. I’m not sure whether the buzz of a pop-up shop is enough to turn around the brand perception, but it’s a start.

For Tupperware’s sake, lets hope the pop-up is part of a broader, comprehensive strategy. Unless they re-imagine social selling for the 21st century, just reviving the marketing and sales model of the pre-internet era is unlikely to work.

Anyone remember the Tupperware Blues song? Finding a way to teach good food storage is about controlling food waste. I don’t care how they do it – but as the song says, “you need to burp the lid to make the seal secure.”

Tupperware is an artifact from an era of larger families, home-cooked meals, and big kitchens with plenty of storage space. It also was a product of a time when, predominantly, women had diminished access to lucrative “side hustles” and time to build community among their peers. In other words — it was an innovation in a long-gone era; one, by the way, in which it had little effective competition. What the brand needs today is a revolution, not a pop-up. At best the pop-up may appeal to a retro market. I don’t think it’s an effective move long-term.

Pardon me for thinking old school, but I can see a great brand making a retailer-exclusive distribution deal and jointly funding a year long effort to activate events aimed toward younger consumers. Tied to the grocery category. Where? Who can win here? How about Tupperware and Target?

Were Tupperware to mount a major initiative to invade retail, they might have a chance. They do, after all, continue to make a premium re-usable container — at least that’s been my experience.

That said, this would take tremendous focus and they’d need to run a TV campaign to get back on the map. That might simply be too much for them to engage with (as I’ve seen with many clients who need to make a big public change evident).

A store in Soho? That’s a nicety but it isn’t enough. Seems to me that they either need to focus small with expensive and premium product or go big, mass, and on TV.

There is no middle for them.

This can absolutely work, Tupperware is capitalizing on the coming trend of the ’50s and ’60s making a huge comeback. They’re on top of what the fashion industry is tracking towards and it just might work. Tupperware isn’t just a functional purchase, it’s a trend and social purchase. A cool-looking space in Soho is an expensive investment that could tie it all together really well.

If Tupperware wants to appeal to a new generation of ecologically-minded adults, they need to relaunch by changing to glass containers. It is widely known that chemicals in plastic leach into our bodies and microwaving only increases this exponentially.

Glass containers are not widely available in the marketplace and when offered they are expensive. If Tupperware can find a way to mass market glass storage containers at a more affordable price point people will flock to their virtual door.

This is a good start. Opening an instagram-ready pop-up gives Tupperware some extended visibility within a newer market segment for them. Simply trying this one thing and then going back to what they’ve already done will lose whatever impact they do generate. Tupperware’s access to reinvention is only to take more new actions and new paths like this to develop their team to be capable real change.

Braintrust
"Unless they re-imagine social selling for the 21st century, just reviving the marketing and sales model of the pre-internet era is unlikely to work."

"This can absolutely work, Tupperware is capitalizing on the coming trend of the ’50s and ’60s making a huge comeback."

"Anyone remember the Tupperware Blues song? Finding a way to teach good food storage is about controlling food waste. I don’t care how they do it..."