Can a Tesco exec school Amazon on physical retail? 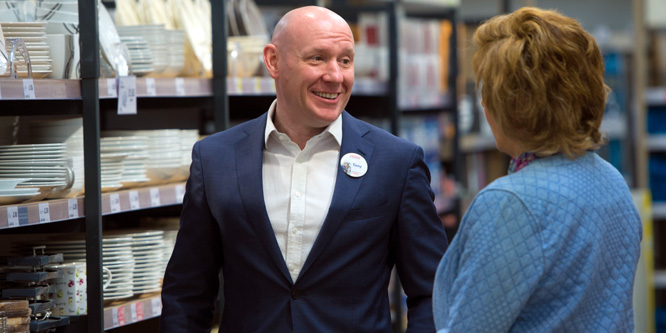 What makes an executive who worked his way up from collecting shopping carts at a Tesco to its corporate suite leave the company after 31 years? Perhaps an offer too good to turn down from Amazon.com.

Tony Hoggett, who until last week was chief strategy and innovation officer at the British retailing giant, is making the move to Seattle to head up Amazon’s physical store operations beginning in January 2022. He was Tesco’s chief operating officer from 2018 up until moving into his most recent role in April of this year.

“It was a big decision to move on from Tesco but after meeting members of the Amazon leadership team and hearing the ambitions for the business and physical stores, I know it’s a journey and an opportunity that I want to be part of,” said Mr. Hoggett in a statement to the media.

He will move into the role of senior vice president of physical stores at Amazon and report directly to Dave Clark, chief executive officer, worldwide consumer. Mr. Clark said that a plan will be put in place over the next several months as it prepares to onboard its new executive.

Mr. Hoggett’s experience in grocery will be critical to Amazon’s ambitions as the company has begun opening more stores under the Amazon Fresh banner in the U.S. and UK. It also continues to operate and learn from its Whole Foods business.

Reuters reports that there has been some investor speculation that Amazon might be interested in pursuing a deal to acquire Morrisons. The British grocery chain signed a 2016 deal with Amazon to supply products for the Amazon Fresh service in the UK. Morrisons launched a dedicated platform for its own products on Amazon.uk last year and continues to offer delivery from its own distribution points through Deliveroo and via Ocado’s automated system. The chain also offers a click and collect service at its 447 locations.

Tesco is the current UK online grocery market leader, followed by Sainsbury’s, Asda and Morrisons. Aldi and Lidl have gained share in the UK in recent years without the emphasis on digital embraced by its grocery rivals.

DISCUSSION QUESTIONS: What will Tony Hoggett bring with him to Amazon from Tesco? Will Mr. Hoggett’s UK retailing experience be an asset or a drawback as he enters his new role leading up Amazon’s physical store operations?

Please practice The RetailWire Golden Rule when submitting your comments.
Braintrust
"[This] should worry competitors as it signals a clear intention to not only expand Amazon’s brick-and-mortar fleet, but to do so with multiple innovative formats."

"Will Amazon allow him the freedom to make the decisions necessary and can he avoid thinking that U.K. and U.S. retail is the same?"

"This appointment shows just how serious Amazon is about physical retail."

14 Comments on "Can a Tesco exec school Amazon on physical retail?"

Tony Hoggett will bring fresh ideas on innovation and operational excellence to Amazon to optimize its physical store strategy. This is another move from Amazon that emphasizes its goal to expand its physical store presence. Mr. Hoggett’s European experience will bring new perspectives that can blend with traditional U.S. practices to improve the store experience and operational execution.

One of Tesco’s often-overlooked advantages is its leadership in multi-format retail. Mr. Hoggett’s charter at Amazon should worry competitors as it signals a clear intention to not only expand Amazon’s brick-and-mortar fleet, but to do so with multiple innovative formats. Amazon moves fast. This will be interesting.

Tesco is outstanding when it comes to operations. Mr. Hoggett’s knowledge and experience will be huge for Amazon. I believe that he will have an immediate impact on Amazon’s brick-and-mortar strategy. He brings deep experience in operations and execution in a space that Amazon is still, in many ways, figuring out.

Anyone who worked their way up from collecting shopping carts to chief strategy and innovation officer at a major corporation has a lot to bring to the table. Amazon’s personnel choices as it moves into physical retail will be paramount to its success. The company will benefit greatly from Tony Hoggett’s hands-on retail experience.

The opportunity of a super seasoned retailer to jump into a monster opportunity like this is the envy of all (or most) retail executives. He’ll come, open his bag of brilliance and influence all the folks under his direction. This is going to be a fun watch! I’m jealous! Can’t wait to watch this unfold.

What a smart move. An executive who has worked their way up from the shop floor over decades in a retailer like this brings so much customer insight and experience that can only help Amazon secure an even stronger consumer experience.

This means that they will be putting a leader at the helm who truly gets it. It always starts with the right leadership to build a business and brand. I’m looking forward to watching his influence and where he takes their fleet of stores.

It will be interesting to see if Tony Hoggett can avoid the mistakes that Tesco made when it attempted its Fresh & Easy chain in the U.S. That failed because the leadership failed to really understand the dynamics of the U.S. market, and how strategies that worked well with Tesco’s customers in the UK and elsewhere might not work here. Amazon gets a lot of credit as a potential disruptor to the grocery industry, and has definitely made some waves, but has not yet evolved into the dominant competitor that many expected. Its physical Fresh stores are still nascent and scattered, and Whole Foods has not evolved as many expected it might under Amazon’s stewardship.

Well folks, if this doesn’t prove that Amazon is serious about groceries, I don’t know what does. Tesco is known as an innovative retailer who operates and tests formats across the world. I can’t think of a better hire than Mr. Hoggett to nursemaid Amazon into the world of grocery retail.

Amazon’s already on track to overtake Tesco as the UK’s top retailer by 2025; Mr. Hoggett could speed up that timeline.

Tony Hoggett’s strategy and innovation expertise are a perfect fit for Amazon’s ambitious global growth. His knowledge will help Amazon adapt physical stores for seamless omnichannel service. Amazon will also gain competitive strategy insights to grow and scale in the UK and Europe.

Global grocery leaders can see Amazon’s in it to win it.

The move of Tony Hoggett to Amazon is exciting and scary at the same time. First, for someone who has been with one business all his career, he will find a massive cultural difference entering Amazon and it will take some time to adjust to his way of working. Tony only knows Tesco and while they have changed CEOs a few times in his 30 years there, they are still ostensibly the same business. Amazon is a tech business moving into retail and there will be some very different views on how this should happen — old school meets new boys! The Tesco culture is very different from the Amazon culture and this will also take time to adjust to. He can’t expect to change Amazon so he will need to be flexible in his approach. Tony will undoubtedly bring great experience of running a huge physical retail business to Amazon, but one man does not make a business and certainly Tony did not run Tesco alone. He had a massive team behind him, some… Read more »
2
|
0
-   Share

Sure he can. Look what Marc Lore did for Walmart.

This appointment shows just how serious Amazon is about physical retail. Tesco have an incredible retail reputation for running exemplary physical retail operations. Given Mr Hoggett’s tenure his experience will not be limited to grocery – it will cover all types of merchandise in multiple geographies. This is a big deal for Amazon and they are in good hands.

Mr. Hoggett brings a wealth of real-world experience at a number of levels in the B&M retail. Two questions will impact his and Amazon’s success. Will Amazon allow him the freedom to make the decisions necessary and can he avoid thinking that U.K. and U.S. retail is the same?

You need expertise and it is a good hire as long as Amazon is willing to listen (which I think they will). Many years ago in Amazon’s early days, they hired Walmart veterans to teach it logistics and operations when it was losing money on every item. The process baked in helped Amazon turn profitable and the rest, as they say, is history.

Braintrust
"[This] should worry competitors as it signals a clear intention to not only expand Amazon’s brick-and-mortar fleet, but to do so with multiple innovative formats."

"Will Amazon allow him the freedom to make the decisions necessary and can he avoid thinking that U.K. and U.S. retail is the same?"

"This appointment shows just how serious Amazon is about physical retail."