Can aesthetics cure our throw-away society? 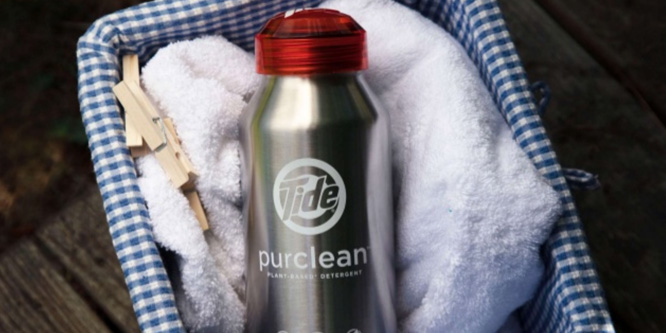 Like many environmentalists, Tom Szaky, CEO of TerraCycle, believes reuse must play a large role in solving eco-challenges, but he doesn’t think sustainability guilt will be enough to change behaviors. Aesthetics, however, might.

At a session at the NRF Big Show, Mr. Szaky provided some early learnings on Loop, a service the waste recycling company developed that allows shoppers to purchase orange juice, laundry detergent and other CPG items in reusable containers. Users put down a refundable deposit via the Loop website when ordering. Loop delivers the items in reusable glass or metal bottles to shoppers’ doors and then retrieves the empties for cleaning and reuse.

Participating retailers, including Carrefour, Kroger and Walgreens, act as pickup and drop-off points.

Mr. Szaky assumed consumers would embrace Loop due to sustainability concerns. He admits, however, that it’s hard to overcome the “unparalleled convenience and affordability” that came when the “disposable lifestyle” was commercialized in the 1950s.

“Even with all that awareness, even the enlightened folks are constantly voting over and over again for a disposable world with their money,” he said.

Encouragingly, many consumers are embracing Loop because of the aesthetic appeal from upgraded packaging that includes stainless steel. “Most people come into it because of beautiful design, then love that it is sustainable,” said Mr. Szaky.

In some cases, upgraded packaging adds features. A Häagen-Dazs stainless-steel reusable in the Loop program is thermally insulated to not only keep the ice cream frozen longer but to keep the surface warm to the touch. The concave vessel also makes the ice cream easier to scoop. Said Mr. Szaky, “It’s just a way better overall experience.”

Some containers may even help improve flavors. Coca Cola, which is bringing back its original iconic package, said Coke tastes best in a glass, followed by aluminum and finally PET plastic.

Convenience may also play a role in converting shoppers. With hand or dish soap, many households already pour store-bought bottles into different containers.

DISCUSSION QUESTIONS: Do you agree that sustainability concerns won’t likely be enough to encourage consumers to shift to more reusable options? Do aesthetics, improved flavor, convenience or other feature upgrades seem most likely to change behaviors?

Please practice The RetailWire Golden Rule when submitting your comments.
Braintrust
"As time and generations march on, sustainability itself will be enough. We HAVE to do something. But for the present, aesthetics WILL certainly have an impact on reusability! "

"Congrats to Mr. Szaky for grasping Buckminster Fuller’s law of innovation — essentially that consumers will only embrace a change when it provides greater utility and value..."

"Convenience is a huge factor, followed by aesthetics, and least of all improved flavor in terms of what will have an impact here."

20 Comments on "Can aesthetics cure our throw-away society?"

Changes in consumers’ behavior will only be brought about through their wallet. As long as, for example, one way packaging is cheaper, consumers will most likely prefer it to any reusable option. Fixing this is a task for legislation. Simply encouraging reuse will not be enough.

Spot on Chris. I read your comments after I posted.

Thanks, David. I believe this is the only way to go.

Cool looking reusable containers will help but this isn’t the silver bullet. Aesthetically pleasing tumblers from Starbucks have increased the use of reusable coffee tumblers, but most people opt for the paper cups.

Pricing is the answer. To change behaviors, you need to make it a financially and socially responsible choice. Similar to the way grocers charging for bags has increased consumers’ use of reusable shopping bags, CPG companies should consider making products with disposable containers more expensive than reusable containers.

As time and generations march on, sustainability itself will be enough. We HAVE to do something. But for the present, aesthetics WILL certainly have an impact on reusability!

How many times have you bought a product, used it, and kept the packaging/container because it was beautiful, useful, relevant, functional or simply unique?

If design firms start to teach design not just for first use function or aesthetics, but the full lifecycle of consumption and the “second life” of reuse, we will see some brilliant new packaging that will appeal to both our sense of duty AND our sense of style.

Since the question does not ask “by when?” the answer is that sustainability concerns will be enough, but it will take more than 20 years for them to be completed adopted by society.

Congrats to Mr. Szaky for grasping Buckminster Fuller’s law of innovation — essentially that consumers will only embrace a change when it provides greater utility and value than its alternative. Bulk water is the camel’s nose under the tent in this scenario. But sustainability will benefit greatly if more companies adopt Loop’s philosophy.

Sustainability concerns won’t change consumer behavior. Any lasting change will be a product of an improved experience and social pressure. While the change doesn’t need to be cheaper, it should be cost-neutral or close to it for the consumer to take it seriously, or it will never get off the ground. Until single-use anything meets with extreme disdain from the general public, change won’t happen.

First, I’m an advocate of the principle that “Design Rules!” Appealing packaging design is, arguably, the best tool in the cause of sustainability. I also learned a long time ago that I throw few things out that have my name on them. So whether I was sending a client a proposal, report or a “motivational” coffee mug, I made sure their name was on it. I’ve had the joy of seeing some things still in use many years later. What if the store could print the family name or a slogan on an orange juice or ice cream container for example?

The psychology behind the sustainability challenge is “What’s in it for me?” Intellectually we all know that recycling is good for the planet but then recycled paper is usually more expensive than new. Unless I’m a tree-hugger (and I am) how is that a benefit for me? We have not yet figured out how to make a connection between cause and consumer.

I am amazed, and maybe even a little embarrassed, by the amount of plastic trash my household produces each month. I’m doing my best to reduce and recycle but it’s not as easy as it sounds, too many items are still over-packaged.

As a consumer, I like this idea and am willing to give Loop a try, although it currently does not carry many products I purchase on a regular basis. I do like the ease of scheduling a pickup or the convenience of dropping off empty containers at Walgreens and Kroger stores. It would be just as easy for consumers to choose Loop products on store shelves. I wonder if that will ultimately become part of the mix?

Clearly “sustainability guilt” isn’t compelling consumers to change their behavior. It will be much more convincing for brands like Loop to portray the impact “you” can have on caring for the planet. Convenience is a huge factor, followed by aesthetics, and least of all improved flavor in terms of what will have an impact here. Overall the problem will have to get worse and personally touch more consumers’ lives before it gets better, although I do think we’ll get there.

Branding value is stronger than ever. Reliance on branding, like the examples in the article, is one way to address the general apathy in our society toward sustainability. Sure, the media professes its importance, yet the majority of consumers don’t care as shown by their daily habits.

It took a while for our consumer culture to become dependent upon disposable packaging and I suspect is will take decades (and a passing of generations) to shift to one based on reusable packaging. Cleaning and reusing “aesthetic” packages has an environmental cost too — beginning with reverse logistics, water and detergents, raw materials — you get the picture.

That said, I believe there is a growing consensus that the use of plastics especially has expanded into a global environmental peril. Both new ideas and new laws are needed to combat this. I have a feeling Gen Z will bring some righteous rage to the conversation.

The challenge with behavior change for disposables is that it’s tied to an abstraction about the future state — people don’t take action on it because they can’t measure the value. If we find a way to quantify it — carbon footprint or whatever — we still miss the guarantees of an outcome. This must be taken up as a focus by large corporations and the government. It’s like clearing a beach full of sand. A few kids with plastic shovels won’t get us out of the way, but a bulldozer and dump truck might.

Some consumers are trying to choose companies/retailers who have a sustainability model. Companies need to let their customers know they are sustainability focused. A small shoe company (DIBA Shoes) uses only recycled paper and no glue for its boxes. A water company sells paper cartons of water versus plastic bottles of water. The packaging is important, but the message certain packaging sends consumers may be more important than aesthetics.

I am very optimistic about the future of recyclability and sustainability. Loop is heading in the right direction with their aesthetic offerings. Style, convenience, and affordability is the trifecta that will ensure massive adoption by society.

Speaking as someone who leaves my reusable shopping bags in the trunk of my car more often than I bring them into the store, like others have said here the amount of stuff we throw out a week as containers/packaging is really shameful. While old habits die hard, I would hope for refillable as well as reusable. Do I really need one more plastic water bottle … plastic hardshell cycling through a one-time use?

I think sustainability won’t be enough on its own, the total package makes sense as we are a culture of buy what is marketed. However, my 23 year old daughter was home at Christmas and is highly sensitive to the planet and sustainability. Even being around her made me re-think my own usage. So yes, packaging and branding works, but so does peer pressure and influence of those around us. The biggest question I think that also needs to be answered is convenience, as well as pricing.

Braintrust
"As time and generations march on, sustainability itself will be enough. We HAVE to do something. But for the present, aesthetics WILL certainly have an impact on reusability! "

"Congrats to Mr. Szaky for grasping Buckminster Fuller’s law of innovation — essentially that consumers will only embrace a change when it provides greater utility and value..."

"Convenience is a huge factor, followed by aesthetics, and least of all improved flavor in terms of what will have an impact here."