Can Barnes & Noble afford to take it easy over the holidays? 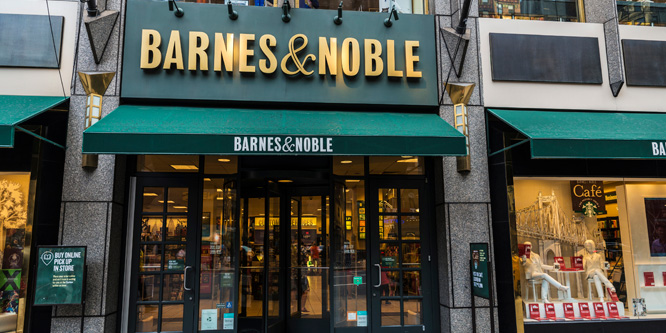 For a long time, it has been clear that Barnes & Noble needs to do something drastic to get back on track — but the chain won’t be taking that step this holiday season.

The anticipated big strategic pivot planned by new Barnes & Noble CEO James Daunt remains in the offing while the bookseller continues with a business as usual approach this holiday season, according to an article on Good E-Reader. Mr. Daunt told that publication in a comment that the chain is currently “following someone else’s plan” with the seasonal books and holiday store fixtures already purchased for the year.

Incremental changes implemented up to this point have failed to yield meaningful positive results and the CEO noted that he would rather spend money on a 2020 chainwide store refurbishment rather than a holiday ad campaign. Mr. Daunt has, however, pursued some small, key steps to the chain’s reinvention, such as launching a “Book of the Year” contest meant to reestablish the chain as a tastemaker actively creating and recommending bestsellers.

One of the major changes Mr. Daunt plans to implement in the long run, according to an article on Publishers Weekly, is to return more control of what appears on store shelves to local managers, rather than depending on national planograms.

Mr. Daunt joined Barnes & Noble in August of 2019, after successfully turning around U.K. bookseller Waterstones within four years of his starting as that chain’s CEO in 2011, according to Inc.

Shortly before Mr. Daunt’s arrival, Barnes & Noble made a few moves to try to re-carve a place for itself in a market now split between the convenient experience of online sellers and the friendly, specialized experience of indie bookstores.

Last October, Barnes & Noble announced the launch of a 17,400 square-foot prototype experiential location in Chicago, with plans to open six of the locations nationwide. A year earlier, the chain announced plans to pare down its average location size down from 26,000 square feet, while experimenting with various different concept sizes. And in 2016 it explored the concept of full in-store restaurants serving alcohol in a few stores.

DISCUSSION QUESTIONS: Will “following someone else’s plan” during the current holiday season affect James Daunt’s ability to turn Barnes & Noble around over the long-term? Which direction do you expect Mr. Daunt to take with the chain, and do you anticipate success?

Please practice The RetailWire Golden Rule when submitting your comments.
Braintrust
"Rather than throwing things against the wall at this late stage, Mr. Daunt is wise to work with what is already in place."

"Mr. Daunt did not have a lot of options or time to make any significant change for this holiday season."

"Rushing something incomplete to market might have been the bigger loss. Smart move..."

13 Comments on "Can Barnes & Noble afford to take it easy over the holidays?"

Mr. Daunt’s thinking may seem passive, however most of the changes that other retailers are implementing for the holidays have had a longer runway. Retailers have been launching, learning and refining throughout the year in preparation for the holiday shopping season. Rather than throwing things against the wall at this late stage, Mr. Daunt is wise to work with what is already in place. In the meantime, the phrase “following someone else’s plan” may have been an unfortunate word choice as it doesn’t tee him up as a change-maker. His decision to give more autonomy to store managers should have the effect of localizing individual stores and make enough of a difference until bigger corporate changes take shape.

Given Mr. Daunt’s August hiring, I’m not sure rushing into holiday programs simply because it’s the holidays would have been a wise move. If Barnes & Noble hopes to recover, they need to clearly redefine their value proposition to their target shoppers, and they need to be very, very good at delivering that value. Knee-jerk programs designed to maximize short-term revenue run the risk of diluting the more strategic changes to come and confusing shoppers. I respect the decision to “stay the course” during the holidays while they continue to prepare for bigger, more permanent changes in the coming months, and I wish them luck.

It’s a wise move not to throw money at someone else’s strategy that you don’t think is working. Better to save that money for more impactful changes that MAY be able to reinvigorate Barnes & Noble. It seems like Barnes & Noble is headed toward a more local, more experiential experience that will draw in customers and encourage them to stay. Amazon owns the “I want a book, I order a book” convenience segment. Barnes & Noble has to offer something more.

Mr. Daunt needs help framing his message – his strategy of localizing and being a “tastemaker” are sound but this headline makes it sound like he’s not taking action!

It seems like a miss by not capitalizing on the spike in shopping around the holiday, but figuring out a long-term strategy is definitely more critical. Making Barnes & Noble a destination that offers something customers can’t get online is key. The people that go to Barnes & Noble like the feeling of being in a comfortable place where they are with like-minded people and it makes them feel good. I don’t know if they currently do this, but having scheduled book club meeting or having a room where customers can book the room for meetings seems like a smart way to attract readers and generate revenues.

Actually, I don’t think that Barnes & Noble has much of a chance to create a home run this year as they lay this season down to get ready to play in the new year. I am sure it was a timing issue and turning this huge seasonal business plan around at the last minute would be dangerous. However, everyone at Barnes&Noble better be ready to hit the road running in the new year!

This holiday season is not going to make or break Barnes & Noble. Their challenge is much bigger than that. They are caught in “no man’s land.” Not cozy, not convenient.

The question Barnes & Noble has to ask to determine a long term strategy is “Why should anyone go to Barnes & Noble?” And don’t speculate. The answer lies with the customers who are actually going to the stores.

Mr. Daunt is going to make his move. The holiday plan was already set in place. A few tweaks here and there are expected, but why scratch something just because it wasn’t started under his leadership?

Definitely a work in progress. I agree with not taking bold steps to change plans this holiday season. It was close to too late when Mr. Daunt took charge. No matter what the unknown strategy will be, Barnes & Noble will have a lot to do to become significant again. Even when there are few brick-and-mortar competitors.

Based on the article, Mr. Daunt did not have a lot of options or time to make any significant change for this holiday season. I agree that it makes more sense to plan to make any changes to the company’s direction once you have had the chance to have developed a strategic plan and have the time to do it properly. That being said he can not wait too long as the chain belt of opportunity to reverse the downward trend continues to move.

With only a few months of runway the new CEO should get a little breathing room. Sure there’s some holiday benefit that’s being sacrificed; but that could be small in retrospect to the changes coming. Rushing something incomplete to market might have been the bigger loss. Smart move and I look forward to what’s coming.

Coming in three months before Black Friday, Mr. Daunt cannot make a significant impact on this holiday season. However, he can ensure that they execute lawlessly against the existing plan while setting up a radically different strategy that entails creating more sound financial position and introducing the right mix of services and assortments to not only attract customers but to make Barnes & Noble a part of their customers’ lives. Tall order indeed and one that requires questioning everything that has come before and a willingness to be bold and take “bet the business” risks.

I heard an interview with Mr. Daunt a few months ago. He is constantly out in stores, coaching staff, reviewing conditions, etc. I believe he does have a solid plan to turn B&N around. I am a fan of what was done with Waterstones and I believe he can do the same here in the US.

Braintrust
"Rather than throwing things against the wall at this late stage, Mr. Daunt is wise to work with what is already in place."

"Mr. Daunt did not have a lot of options or time to make any significant change for this holiday season."

"Rushing something incomplete to market might have been the bigger loss. Smart move..."