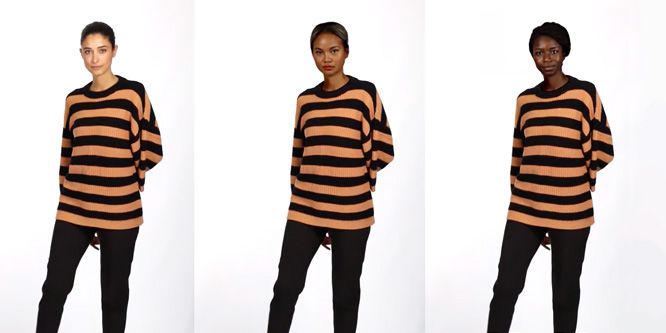 The video editing technology that has been dubbed “deepfake” has some spooky potential implications, but startups are looking for ways it might be useful at retail.

A face-swapping app now in beta called Superpersonal allows users to map their faces, including the smallest facial gestures and expressions, onto a virtual body to create a highly-realistic, moving on-screen representation of themselves, Forbes reports. A second solution by an Austrian team called Reactive Reality allows users to make lifelike video avatars of themselves to interact with, try on and move around in virtual clothing.

Thus far, deepfakes have mostly been used for novelty’s sake. A popular video of Jim Carrey’s face superimposed over Jack Nicholson’s in his starring role in The Shining, for instance, makes for a humorous if not unsettling watch. This ability of deepfakers to tamper with video, however, also demonstrates the technology’s potential for abuse.

The most obvious concern about deepfakes is that it lets creators make videos that purport to show people saying things they never said or doing things they never did, which would be difficult or impossible to distinguish from real footage of the person. There is a laundry list of potential negative social and political implications that could arise were the technology to be used in this way.

The Wall Street Journal reported last week that experts in tech, government and academia are expressing concern over the potential use of deepfakes to confuse the public during the coming election cycle. Developers from various sectors are working to find ways to differentiate authentic video from deepfakes, which some suggest will be undetectable to viewers within 12 months.

As for its uses at retail, though, deepfake technology represents a potential evolution of remote try-on technology that promises greater convenience for shoppers and fewer product returns. Brands and retailers have rolled out numerous AR apps which in addition to clothing, allow for virtual try-ons of products like makeup and hair dye which can be time consuming or difficult to test out in real life.

DISCUSSION QUESTIONS: Do you see value in deepfake technology for retailers and brands as a try-on tool? What other good use cases do you imagine? Are you concerned that deepfake tech will be abused by retail marketers?

Please practice The RetailWire Golden Rule when submitting your comments.
Braintrust
"Brand managers must be agile enough to pivot when, not if, this tech makes headlines to the detriment of a brand that abused it."

"Deepfake takes the fun of FaceApp and Photoshop to a whole new level. I can see plenty of uses for retailers..."

"My response to application of this tech in retail is similar to all the other VR technologies: There’s little reality in virtual reality."

Most any emerging technology has the potential to be misused. Brand managers must be agile enough to pivot when, not if, this tech makes headlines to the detriment of a brand that abused it.

Deepfake takes the fun of FaceApp and Photoshop to a whole new level. I can see plenty of uses for retailers, especially for the fashion and beauty industries. The ability to virtually see yourself model clothing on a body that moves is cool, especially if that body is a size-wise copy of yours. There are also a lot of opportunities for this to go wrong, but isn’t that true with all technology?

I can imagine that marketers — just as they use “GF” for gluten free — might gain points by verifying their images with labels like “NDF” (not deepfake). It’ll be the new “unretouched.”

Just think about all the fun, new ways deepfake can make us feel inferior. 😉
I can’t wait to see what magazines do to up the ante.

Reduce returns? I really don’t think so. In my department store years, it was not unusual to note that our female customers tried on three items as compared to men who took only 1.5 items to make the buy. The real life mirror test always shows the most definite failings or advantages of the fit. Will it reduce returns? I don’t think so, but it certainly has the leverage to really multiply customer use. That additional business could/would very much overtake the return issue with sales volume increases. I’m watching this for retail — but for abusive uses on the internet, I’m very concerned.

My response to application of this tech in retail is similar to all the other VR technologies: There’s little reality in virtual reality.

The absolute minimum killer truth for the VR and deepfake promoters is they ignore that computer color is NEVER real color — it’s backlit, lacks dimension, and will never be able to be used to give a real sense of color in the real world.

So, we won’t ever be able to paint rooms in VR to try color, try clothes on our avatar to judge color, judge furniture fabric, sense whether fruit meets our standards, etc.

They are impossibilities. My biggest fear is that marketers will invest too heavily in what’s a novelty and not a powerful shopping tool. The novelty might be worth it (perhaps like the VR in a Lego store), but it simply can’t deliver what tech offered and stores want to promise.

Going to take a totally different look at the technology. If it as life-like as they say ,I see it being used as a training tool where the presenter’s look will be adapted to the audience. Much higher level of acceptance.

The application of this technology into an ecommerce experience, when intentionally and thoughtfully applied, would benefit a site’s traffic and sales. The VR application of “trying-on-glasses” with Warby Parker is wrought with a subpar experience. If the use of the deepfake technology doesn’t look “real”, then the effectiveness and acceptance of this may hurt a brand. I suggest that if an ecommerce store were to adopt this, that it be included only as an added, selectable option as not all consumers are going to want this technology or trust it.

While the ramifications of deepfake technology can be a bit frightening, there is value in its use as a tool for brands to offer. In the BRP Consumer Study, 32% of consumers indicated they were likely to choose a store offering an AR experience over one that didn’t offer it.

Braintrust
"Brand managers must be agile enough to pivot when, not if, this tech makes headlines to the detriment of a brand that abused it."

"Deepfake takes the fun of FaceApp and Photoshop to a whole new level. I can see plenty of uses for retailers..."

"My response to application of this tech in retail is similar to all the other VR technologies: There’s little reality in virtual reality."