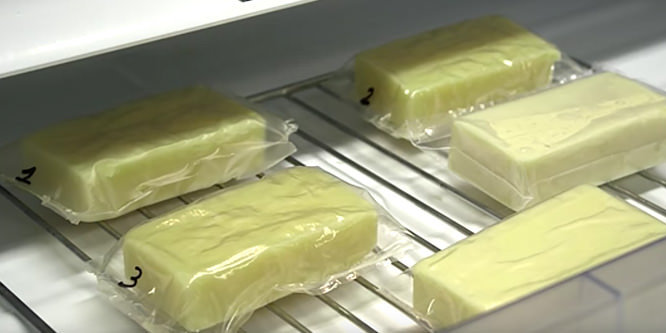 Brands might have a new option when it comes to environmental friendliness. A preliminary breakthrough in technology could find CPG manufacturers replacing non-biodegradable plastic packaging with material that can be eaten.

The U.S. Department of Agriculture has discovered how to develop a biodegradable, edible packaging film made from the milk protein, casein, Bloomberg reported. Researchers are eyeing the casein-based film, which is more airtight that plastic, as a potential replacement for the wrappers for packaged cheese, single-serving cheese sticks, soups, coffee and other food products packed in thin, difficult-to-recycle plastic wrap. The technology is more promising than, for instance, potato starch-based packing peanuts.

The potential for single-serving packaging that dissolves quickly could offer a fix for at least one popular but environmentally questionable innovation, the Keurig machine. Keurig machines and their single-serving K-Cups are considered a scourge by environmentalists due to the amount of waste they generate. K-Cup inventor John Sylvan went as far as to say that he sometimes feels bad for having invented the machine in an interview with The Atlantic.

There may be limits to how much packaging consumers would eat and regulators would allow. It is hard to imagine mainstream customers going in for edible external packaging, like a cereal box. On the other hand, it’s possible that food scientists could someday flavor packaging in a way that complemented the product within.

Whatever form it eventually takes, edible packaging could help retailers get closer to the goal of generating zero waste. Grocery stores have approached the zero waste equation from different angles. Some chains have started selling rather than tossing “ugly” vegetables, encouraging customers to bring their own grocery bags and have attempted to reduce unnecessary packaging. Some smaller stores have gone farther, attempting to adopt fully packaging-free models.

But the get off the ground, edible packaging film will need support from brands. The technology could end up sitting in the lab, rather than on the shelf keeping food fresh, unless companies step in and find their own applications for the edible film, as was the sentiment of one researcher quoted by Bloomberg.

DISCUSSION QUESTIONS: How realistic is it to think edible packaging can help retailers in their sustainability and waste reduction efforts? What would it take to get CPG brands to adopt, and consumers to accept, edible packaging?

Please practice The RetailWire Golden Rule when submitting your comments.
Braintrust
" I don’t see consumers being willing to consume external packaging that has been subject to all the exposure along the supply chain."

"Edible packaging can make a big impact on feeding and even saving wildlife in the future."

"Packaging gets a bad wrap."

I hope this is an end of the week, comic relief question. But for the moment, let’s assume it is serious. The answer is, it isn’t very realistic. Let’s start with the basic problem — you buy food to eat food, not the packaging it comes in. Now let’s move on to a slightly more nuanced issue. If the packaging in question can dissolve in your mouth, how would you wash it? I can’t see millions of Americans munching on that nice cheese package that has been handled by … well … millions of other Americans … without washing it. There are much better ways to address this issue, such as reducing packaging, making it out of totally biodegradable materials (as opposed to corn starch and plastic), etc. As to the final question about what it would take to get CPG brands to adopt, and consumers to accept, edible packaging, at least at scale, the phrase, “an act of God” comes to mind.

Biodegradable packaging is fine, but edible packaging, forget about it. Zero waste is wonderful, but unlikely anytime soon, and for me I’m not eating the package of anything made unless of course it is chocolate. Happy Labor Day everyone.

Edible packaging can make a big impact on feeding and even saving wildlife in the future. Replacing plastic six pack holders with edible materials for sea turtles is just one example that’s capable of making a big impact. In addition, if packaging can be readily used in every day composting that’s good too. I’m agreeing with Steve Montgomery in that I don’t see a future in everyday human households for eating the food and then the packaging.

Nice thought and for some products maybe there is a possibility. But mainstream? Not so much. At least not now.

Packaging gets a bad wrap. As long as we see it as a protective coating that expels or absorbs contaminants that can diminish the value of our purchase, consumers will see it as part of the cost of purchase.

Less is more in packaging, and faster biodegradation is welcomed.

Cheese wrapper sandwich? Bologna wrapper mousse? Cereal bag stew? I don’t think these will be shown on the Food Network any time soon.

But back to 2016, whatever the merits of “zero waste” goals — and I seem to see them mostly on place like RW more than I hear mention of them on the street — I think it would be best to start with more blatant examples of excess (like the “single serve” mentioned herein) … difficult to get too excited when even the author notes “It is hard to imagine mainstream customers going in for edible external packaging.”

Packaging made from milk protein, corn and other biochemicals have been around for years. Perhaps the time has finally come where a measurable percentage of consumers may care.

Boy, it is hard enough to keep the dogs out of the cupboard now. They are going to love the idea of edible packaging … mice anyone?

Braintrust
" I don’t see consumers being willing to consume external packaging that has been subject to all the exposure along the supply chain."

"Edible packaging can make a big impact on feeding and even saving wildlife in the future."

"Packaging gets a bad wrap."