Can Forever 21 come back from bankruptcy? 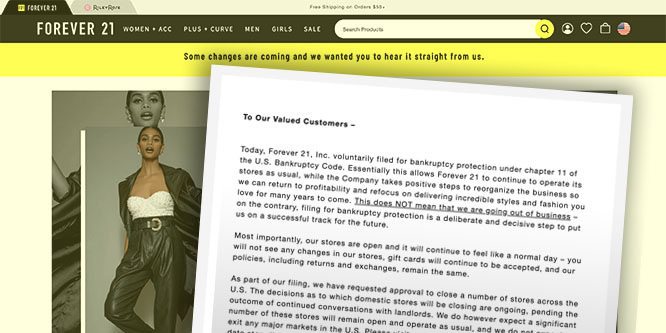 It’s official. After months of rumors, Forever 21 has filed for Chapter 11 bankruptcy protection and announced plans to close up to 350 stores worldwide including 178 in the U.S. The fast-fashion retailer currently has 815 stores total.

In announcing its plans, Forever 21 said it was being supported by “dozens” of vendors. The retailer also announced that it has obtained funding from JPMorgan Chase Bank and TPG Sixth Street Partners to help it in restructuring its business. The retailer pledged to continue operating business as usual and that it would honor all gift cards, returns, etc.

Simon Property Group and Brookfield Properties (owed $13.4 million collectively) and FedEx (owed $3.4 million) topped the list of landlords and vendors that Forever 21 is seeking to repay, according to a Washington Post report.

While some believe that Forever 21’s clothing grew out of favor in an environment where consumers are eschewing disposable fashion and gravitating towards second-hand clothing, others simply see a company that grew too fast, too soon.

Over the years, Forever 21 has often zigged when other retailers have zagged. Back in 2010, when many retailers were moving into smaller format stores, Forever 21 announced it was going big with locations that were up to nine-times larger than those it had operated up to that time. It also embarked on an expansion overseas in Asia and Europe. With its Chapter 11 filing, Forever 21 announced that it would be exiting many of the markets where it has opened stores in recent years.

“[There were] too many stores in too many increasingly weak malls that were increasingly larger in size than Forever 21 could productively manage,” Mark Cohen, director of retail studies and adjunct professor at Columbia University’s Graduate School of Business, told NBC News. “Taking advantage of a surplus of cheap oversize real estate lead them to begin to merchandise categories in which they had little to no expertise.”

DISCUSSION QUESTIONS: What will be the keys to Forever 21 turning its business around? Do you think the chain is more likely to succeed or fail in the attempt?

Please practice The RetailWire Golden Rule when submitting your comments.
Braintrust
"Every effort should be made to build bridges to its digital business, particularly with the minority and value-oriented shoppers that have affinity for the brand."

"Now, Millennials and Gen Z are trending towards minimalism and thinking about the broader impact that fashion should have when it comes to sustainability."

"As the cliche goes, today’s peacock is tomorrow’s feather duster."

10 Comments on "Can Forever 21 come back from bankruptcy?"

To be fair, this is a bankruptcy announcement, not a liquidation. However, discontinuing operations in 40 countries and shuttering 178 stores in the U.S. marks a major pruning right off the bat. Forever 21 isn’t a barometer of overall retail health so much as a cautionary tale of overexpansion. As new generations of shoppers backed off of disposable fashion, Forever 21’s aggressive brick-and-mortar scale-up and reliance on mall-based locations didn’t align with new retail realities. At the same time, large-scale competitors like Target and Walmart have refined and reinvigorated private brand programs and a host of rental, second-hand and recycled innovators are offering alternatives. Right now, Forever 21’s e-commerce sales are quite underdeveloped. If taken too far, Forever 21’s diminishing brick-and-mortar presence could compromise overall brand awareness so every effort should be made to build bridges to its digital business, particularly with the minority and value-oriented shoppers that have affinity for the brand.

Forever 21 has been on a long slow side for years and, while there may still be loyal followers, I’m not sure this brand has the staying power to turn the business around. Fashion is fickle, and Forever 21 certainly had its share of success, but sustaining brand loyalty and sales growth over a long term is difficult for any retailer to do. I suspect that Forever 21 has a strong enough following to attract turnaround capital and support, but I’d say the probably of success is quite low.

The only thing differentiating about the brand is how cheap it is. Their target demographic is increasingly more concerned with sustainability and quality – two places where Forever 21 misses the mark. Disposable fashion has seen it’s day so the only way I see forward for the brand is to revert back to smaller format stores in better malls across a much smaller footprint.

Forever 21’s problems weren’t just a case of facing headwinds of omnichannel and weak mall traffic: The company’s own decision to place its bets on more and larger locations was a strategic mistake. Its rapid growth misled its management into a mindset of “We can do no wrong.” (As the cliche goes, today’s peacock is tomorrow’s feather duster.)

The withdrawal from overseas markets and many U.S. locations needs to be accompanied by a strategic reset. First, recognize how much the off-price segment has eaten into the “treasure hunt” experience of shopping Forever 21 — and do something about it. (Bringing some focus and organization to the assortments and store experience would be a good place to start.) Second, develop more off-mall locations as part of the reset. Finally, get the e-commerce side of the business ramped up, even if it involves using a portal like Amazon as a virtual storefront.

The low price, fast sell-through model worked for a while at Forever 21 but, as foot traffic in malls dwindled, those stacks of clothes did not move. They have been known to “recycle” merchandise – pulling it off the floor as the season ends and then putting it back out the following year. The customer is smarter than that. And while foot traffic slowed, they did little to grow their online business, and with such low price points it probably was very unprofitable. Lots of things to improve on, including getting inventory levels in check and a focus on digital. I give them a 50/50 shot at this point.

Sometimes “get big fast” backfires, and Forever 21 is a perfect example of overexpansion at too rapid a rate. Large format stores were not the best idea for their brand. I’m sure they had H&M in their sights at the time, but consumer tastes change, and they haven’t had the product shoppers want for some time now. While they certainly could use a strong pruning (which they’ve indicated) the real issue for them is designing merchandise customers want. Until they fix that, I expect we’ll start seeing comparisons with Gap, which continues to have similar issues with merchandise styles consumers just don’t want to buy.

For brands to survive for decades, they have to constantly innovate to meet the trends that their target consumer segments want. Forever 21 really peaked in the three decades between 1990 and 2010 when teens wanted massive closets with lots and lots of pieces to build their ensembles. However now, Millennials and Gen Z are trending towards minimalism and thinking about the broader impact that fashion should have when it comes to sustainability.

While certainly disappointing and very challenging for all those that will be impacted by this restructuring, the challenges at Forever 21 are far less a result of the mythical “retail apocalypse” and much more a result of overexpansion coupled with an inability to adapt to changing shopper expectations. I am already seeing numerous irresponsible news articles lumping the Forever 21 store closures into the “apocalypse” narrative. This was clearly a failure to adapt assortments and evolve experiences, not a failure to keep up with Amazon — despite what the media may tell us.

Dave, great points. It can’t be said enough that many casualties of the “retail apocalypse” were actually victims of their own debt loads, overexpansion, poor merchandising, and so forth. Execution matters.

As is frequently the case, I think we need to define “successfully” here. If it simply means “be around a year from now,” then its chances are good. Bankruptcy is quite forgiving … literally (perhaps too much so); but if we mean staying off the “repeat offender” list, then I’m less optimistic. It sounds like they made every mistake possible — over expansion, format muddling — in a very competitive market segment. The usual things one tries to build a turnaround on — quality, unique products, customer loyalty — I don’t see much of that here. And not to be cruel, since a liquidation (as always) would hurt a lot of different stakeholders, but I don’t think the retail landscape would miss them much. We’re not talking about some storied retailer where Mary Todd Lincoln bought her trousseau, or even Barneys … it’s just another face in the crowd.

Braintrust
"Every effort should be made to build bridges to its digital business, particularly with the minority and value-oriented shoppers that have affinity for the brand."

"Now, Millennials and Gen Z are trending towards minimalism and thinking about the broader impact that fashion should have when it comes to sustainability."

"As the cliche goes, today’s peacock is tomorrow’s feather duster."