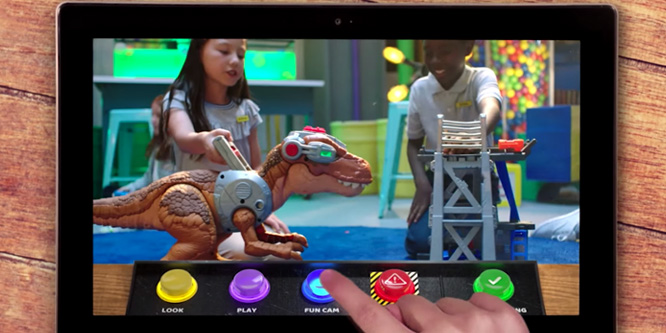 This article was written jointly by Tom Ryan and Matthew Stern.

Walmart this holiday introduced an online shop, The Walmart Toy Lab, that invites kids to become a “Walmart toy tester” and play with 20 top trending toys from their computer or tablet.

“Like stepping into an interactive unboxing video, The Walmart Toy Lab lets kids take on the role of an official Walmart Toy Tester,” wrote Walmart in a statement.

Unboxing and toy feature videos have shown to be a huge draw for toy-shopping kids. Earlier this year, Walmart partnered with pre-teen YouTube star Ryan of RyansToyReviews, who in 2016 made a whopping $11 million off his unboxing videos.

The Toy Lab rollout comes a few months after Walmart’s announcement that it was branding itself as “America’s Best Toy Shop” with expanded toy aisles and assortments in its stores, an improved toy demoing experience in-store and exclusive toy-related content online.

At the Walmart Toy Lab microsite, an interactive video first introduces the game’s host, Burt, who guides kids through the toy-testing steps. Using a “Funtroller,” kids select toys to test and can choose to take a closer look, try their main features and watch other children play with them. Kids can also click the “Don’t Push” button and see Burt enter a dream sequence, hang upside down or otherwise face an “unexpected surprise.”

After testing, kids add the toy to their digital wish list, the Toy Box, and share with Santa or their parents, or identify the item as “not for me.”

“This was a way for us to make the toy catalog more fun, engaging and interactive — it’s a way to experience what these types of toys are like as [customers] plan purchases,” Walmart spokesperson Tara House, told Digiday. “What will be interesting is what gets the most attention, what [content] the kids are engaging most with, and what ends up on the wish lists.”

The microsite, active until the end of the holiday season, is one of Walmart’s first collaborations with Eko since it formed a joint venture with the developer of interactive video technology in early October. Walmart agreed to participate in Eko’s next funding round.

The partnership, which also may include interactive cooking shows, has a goal of enabling viewers to “participate in and shape stories as they are being told.” Said Yoni Bloch, Eko’s CEO, in a statement announcing the venture, “Our mission is to evolve past basic personalization and partnering with Walmart will accelerate that evolution.”

DISCUSSION QUESTIONS: Do interactive video experiences such as Walmart Toy Lab have the potential to support a wide range of categories online or is the technology likely only suitable for a narrow range, such as toys? Does the technology have a place at the store level as well?

Please practice The RetailWire Golden Rule when submitting your comments.
Braintrust
"I applaud their appetite for innovation, but I’ll be watching how consumers take to this with interest."

"Walmart was smart to partner with Ryan of Ryan’s Toy Reviews because practically every kid knows Ryan."

The technology has multiple uses but probable a higher impact on the toy category. Children can be very impressed by the interactivity. Kids are usually the force behind the purchase of toys. However, the technology is replicable so fending off the completion (whatever that may be) will be difficult. Being first to market will have its rewards.

This is an interesting use of technology and certainly can be used in many categories from toys to fashion to beauty to electronics and furniture. Any category where shoppers like to try and learn before they buy.

I can see limited applications at the store level where there is no unboxed product for the buyer to try first. I see this more as an online vehicle for growth and interaction.

Outstanding Perfectly in line with my definition of experience: Explore + Experiment = Experience. This greatly enhances learning and building trust and comfort — for parent and child alike. Now is a similar experience available in-store?

The reason people love unboxing videos on YouTube is authenticity. Real people, no scripts, no agenda. I applaud their appetite for innovation, but I’ll be watching how consumers take to this with interest. Why would anyone trust a produced, brand-backed video over the plethora of ones available on most products from people with no ties to selling?

If I were in charge of this test, I’d be tracking mobile as well. My gut says that a great deal of people will see this and grab their phone to find their own video review. Either way, data drives the direction, so kudos for exploring the idea Walmart.

With all due respect, you said, “I’ll be watching how consumers take to this with interest.” The “Consumer” in this case are kids. Kids didn’t and aren’t watching this video as they aren’t subscribed to Walmart’s YouTube channel. This video only got 7,600 views in one week! It bombed!

Walmart’s Toy Lab story is related to Enjoy Life’s use of their core fundamentals:
Good products are not enough.

Act like a storyteller. “The reality is, you have to tell stories every single day. And we share stories all the time with our consumers.”

Using interactive video experiences enables these core brand fundamentals and should be used for every category.

What going to our local Toys “R” Us, or making the special family trip to the original FAO Schwarz was to our generation, interactive unboxing experiences are what resonates with kids today. The opportunity to interact, experience, and experiment with the toys via an interactive app is the best way for Walmart to leverage the latest technologies.

It’s remarkable to see my own kids remake unboxing videos on their own, and then demonstrate how the toys work to the entire family. The unboxing videos and influencers on YouTube are becoming omnipresent. There is an infinite amount of white space in the toy sector with the absence of Toys “R” Us. Walmart is wise to jump on this opportunity, gain some new young influential fans, and find a way to use technology to gain a competitive advantage.

There are many categories that can benefit from technology that offers more fun, engaging and interactive experiences, not just toys. This is especially true for categories that require explanation and touching and feeling. In-store this may be limited however, as Walmart is not set up for shoppers to linger and engage in this type of manner.

Way to go, Walmart. This is brilliant.

It’s no secret that kids love an interactive online experience – have you seen the video where an 18 month old little girl swipes at the pages of a magazine, trying to make the photos larger? A child will happily play online for hours if you let them. My grandson is just three, but when you hand him a tablet or smartphone he knows exactly what to do. That kid can navigate YouTube Kids like nobody’s business. So can every other child of Gen Z.

Walmart was smart to partner with Ryan of Ryan’s Toy Reviews because practically every kid knows Ryan. I also like that the Walmart Toy Lab lets the child create a digital wish list. I remember when you could circle the toys you wanted in a catalog, it’s not as easy today. I can see this technology used in other hands-on categories like crafts and cooking, both online and in-store.

Videos already support a wide-range of categories through YouTube. While these YouTube videos are typically done by non-professional video stars familiar with the product or service, having them professionally done like the Walmart Toy Lab can only increase the effectiveness of the videos. Providing children insight into potential acquisition of toys will be a lot more effective than just static pictures. Having the videos in-store will increase the likelihood of a sale or a decision not to purchase. Over time, there will be a competition among toy videos to attract the attention of the consumer to the point that the aisles may become more videos than products.

In sales there is something called the “Puppy Dog Close.” Imagine going to the pet store with your family. The salesperson says, “Take the puppy home over the weekend. If you don’t like it, bring it back.” How many parents do you think disappoint their children and take the puppy away from them to return it to the pet store? Letting consumers, especially children, have an online experience like Walmart is akin to the Puppy Dog Close, and I think it is a genius retail move.

I do think this will work quite well for the toy category, because children will enjoy the experience and will not be put off by the fact that it is a choreographed retailer experience, vs. what really drives the success of “unboxing” videos in general for adults: authenticity.
Therefore, it will likely have limited application in other categories that require an adult. Possibilities exist however for testing this in complex product categories such as certain electronics.

Here was my acid test: my young nephew came over and I showed him this website. I couldn’t get him off of it. If Walmart manages content as so many BrainTrust member comments have suggested, this is explosive. We always say “put your customer’s eyes on.” That’s what counts.

Walmart is trying, but still missing. First of all, who is going to their website? Who is going to their YouTube channel? Not kids! The reason Ryan’s Toy Review works is because he has 17 million followers, who are all kids who tune in to watch the videos and tell their parents exactly what to get them. He is selling directly to the kids. Walmart’s YouTube channel has 26,000 followers. The math is simple. Mr. Kizer mentioned that he had to show his nephew the “website” video. That tells you right there that NO kid is stumbling upon this video as Walmart didn’t have an influencer marketing this for them from their own channel. Walmart didn’t even bother to hire a micro-influencer which would be less expensive than a “Ryan.” Shame on them. You guys are hopefully going to wake up one day and understand that you have to come to where we are, what channels we watch/follow and like! It’s not that hard when you have the right people doing your marketing research. Today,… Read more »
0
|
0
-   Share

Good points, Sky! But let’s not forget that someone had to take a kid to the Webkinz site the first time, too.

Web who? Lol, and I’m sure that was wayyy before any social media existed.

Experiences are key to connecting consumers to brands these days. Kudos to Walmart for thinking smart. There are many applications for this and for the Holiday season, toys are a great one. Can it be used in the store? You bet! Let the consumer come in an play. Let the kids pick out what they like. Give Walmart more insight into what consumers like and want. Well done Walmart and my 2 cents.

Shopping for toys has changed a lot since I was a kid. I remember browsing thick catalogs from Sears, Penney’s and Wards and folding down corners for my wish list.

The Walmart Toy Lab will provide entertainment for kid and increase their excitement for their favorite toys. These immersive, interactive video experiences can be used for other products beyond toys such as cooking products (following recipes) cosmetics, and other items that are complex or very visual. Consumers like the theater of shopping and this a great way to bring product to life.

Braintrust
"I applaud their appetite for innovation, but I’ll be watching how consumers take to this with interest."

"Walmart was smart to partner with Ryan of Ryan’s Toy Reviews because practically every kid knows Ryan."