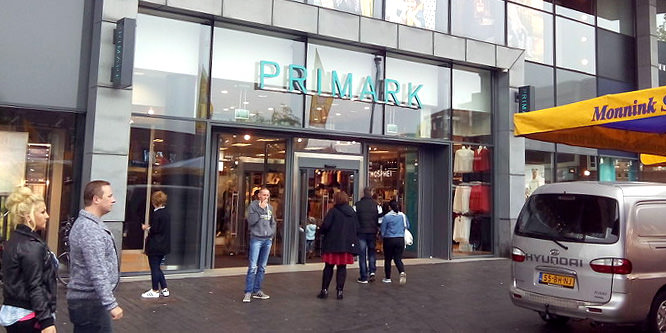 It seems like a foregone conclusion these days that an apparel retailer setting up shop in the U.S. would want to have a strong e-commerce presence. As Irish fast fashion retailer Primark continues its slow expansion, it is not only bucking this trend, but also doubling down on a physical location generally believed to be on the downward swing — the shopping mall.

Primark is slated to take over seven former Sears locations in department store malls. The retailer has five U.S. locations currently open, with plans to open a total of 10, according to NorthJersey.com. In an interview, Jose Luis Martinez de Larramendi, president of Primark U.S., specified that the company is not pursuing e-commerce “for the time being,” instead focusing on the in-store experience.

Mr. Martinez de Larramendi said that people have been driving from an hour away, or even taking buses from New York to Boston, to reach the nearest location.

While it’s a move that may raise some eyebrows, Primark is not the only internet-age fast fashion retailer to eschew e-commerce. Uniqlo, a store that, like Primark, began its brick-and-mortar expansion in the U.S. at a very slow pace, went between 2006 and 2012 without an online store available stateside. H&M delayed its creation of a U.S. online store until 2013.

How much traffic a foreign fast fashion chain can drive to U.S. shopping malls remains to be seen, though in the past, the exclusivity of brands like Uniqlo, in their pre-online days, was part of the appeal. And it is clear that Primark is paying attention to location. Last November, Primark opened in a former Sears at the famously massive King of Prussia Mall in Pennsylvania.

Making slow, highly-calculated moves into malls could be seen as judicious, given that some have argued that anchor department stores have seen their sales per square foot negatively affected because of too many locations.

But Primark does not appear to be concerned about having too many brick-and-mortar outlets. According to the Primark website, the chain, which began in 1969, has 161 locations in the UK and 38 in Ireland (branded as Penneys).

DISCUSSION QUESTIONS: Can Primark survive and thrive in the U.S. without offering any e-commerce presence? Can the chain expect to build its presence by focusing on U.S. shopping mall locations?

Please practice The RetailWire Golden Rule when submitting your comments.
Braintrust
"For the time being, I think they are wise to keep their focus on brick-and-mortar stores and what they do best."

"For now, Primark can capitalize on the frenzy of shoppers that passionate about this unique concept by continuing to rely on physical stores."

"This isn’t Primark’s only option, but there is nothing wrong short-term with the road they are taking."

8 Comments on "Can Primark conquer America without selling online?"

Thousands of retailers in the U.S. do not have an e-commerce presence. Primark is looking to open a total of 10 stores. The sky won’t fall if they wait to open these stores before looking at going online. These stores will give them a foothold in the U.S., allowing them to interact with U.S. customers. Once they have gained valuable customer knowledge, they can consider e-tailing.

They have a successful model in place and there seems to be an excitement built into shopping at their stores. I think they will do well competing against other stores because they follow current fashion trends and offer low prices. Over time I believe they will have to turn to e-commerce to keep growing and expanding but, for the time being, I think they are wise to keep their focus on brick-and-mortar stores and what they do best.

I agree that Primark has plenty of opportunity to build its brick-and-mortar footprint before worrying about the complexities of “omnichannel” … after all, it’s not as simple as just starting a website anymore. H&M is a good example of a company late to the e-commerce party while busy opening stores — and building its brand awareness — coast to coast. This isn’t Primark’s only option, but there is nothing wrong short-term with the road they are taking.

I’m shocked more retailers haven’t taken this measured approach. Department stores in particular seem to have decimated their in-store experience, going so far as to reorganize their store operations in the service of “omni,” and at the expense of the customer standing right in front of them.

Primark’s fast fashion retail concept at extremely affordable prices has curated a cult-like following among young adults. This fanatical fan base of customers who are willing to drive an hour or two to visit a store puts Primark in the driver’s seat. For now, Primark can capitalize on the frenzy of shoppers that passionate about this unique concept by continuing to rely on physical stores. When you are a hot commodity, you have a lot of options. However, once they have a stronger footprint of store locations and the novelty of its distinctive concept wears off or consumers shift their focus to another new concept, I predict that Primark will eventually add an online store to reach customers nationwide. While there has been a lot of negative press for malls lately, if you are a destination retailer, you can be successful almost anywhere, “even in malls!” Primark is getting great real estate deals on the so called “dead” mall space. Their disposable clothing in vibrant hues has created a fast fashion juggernaut that can dictate… Read more »
1
|
0
-   Share

Primark is still in the novelty phase, drawing attention to itself simply by opening stores and being the new kid on the block. That can’t last forever, and eventually I expect it will become more like other retailers because that’s what sells things. It’s possible, of course, their product is so inexpensive or (purchases of it are so) impulse driven that an e-model doesn’t work, but that’s hard to really picture. I wish them well … and with a large UK store base, over the next few years they may need every bit of that “Luck o’ the Irish” they can muster up.

Well, it’s not really a fair question for their business model, is it? Their buying M.O. and their turn ratio kind of makes it impossible to sell on line. What’s in stock for more than 5 minutes? So, doing what they’re doing — fun brand site with some promo ideas — is about all they CAN do IMO. Keep it up, Primark! (PS: have fun competing on price and disposable fashion here in the US…)

Far too many analysts are making the assumption that Primark will become a destination retailer in the United States. They will not. The primary demographic that Primark is targeting does the majority of their shopping online and not in stores. Unless Primark implements a robust and innovative online and mobile strategy, their sales growth will be positive but not spectacular.

Braintrust
"For the time being, I think they are wise to keep their focus on brick-and-mortar stores and what they do best."

"For now, Primark can capitalize on the frenzy of shoppers that passionate about this unique concept by continuing to rely on physical stores."

"This isn’t Primark’s only option, but there is nothing wrong short-term with the road they are taking."