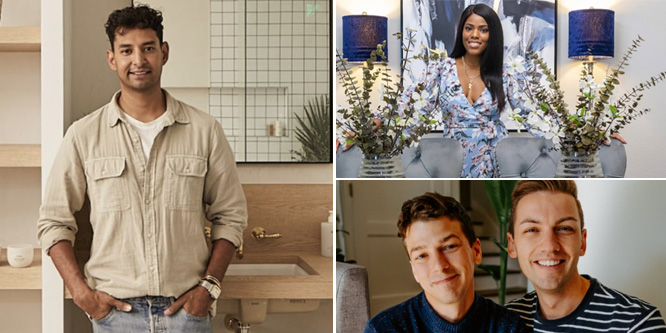 West Elm has launched its first social ambassador program in another test of the potential of influencer marketing in the home category.

The program, West Elm Collective, will feature 20 regular content creators, called Insiders, as well as a series of monthly Tastemakers.

The Insiders include some interior designers but are mostly social media personalities. Each will have their own curated West Elm shop page to share their favorite West Elm designs and recommendations. Insiders gain early access to new collections that can be tapped for content. Instagram Lives, live-selling events, online discussions and how-to series are planned.

“They’ve selected their favorite West Elm pieces, many of which they actually have in their own homes, so their audiences, as well as our customers, will be able to see on their channels how these products actually live in a space,” Andrés Ortega, West Elm’s director of partnerships and influencer marketing, told Business of Home.

Members earn an affiliate commission on purchase click-throughs from their pages. Regular customers are also being encouraged to join West Elm Collective.

According to Poshmark’s 2020 Social Commerce Report, 41 percent of consumers and 57 percent of Gen Z discover new brands via influencers on social platforms.

The influencers trend is being driven by younger consumers, many of whom aren’t homeowners, presenting some challenges for these efforts, according to the Business of Home article that explores the high-end home décor category. Home item samples also tend to be bulky and expensive versus beauty and fashion items.

However, a number of home furnishing brands and chains such as CB2 and IKEA are tapping influencers dedicated to home, food, parenthood, entertaining and other lifestyle topics to not only drive sales but create online content. IKEA’s campaigns have been particularly innovative, including one tasking influencers to transform an empty room into a stylish living space within 180 minutes.

DISCUSSION QUESTIONS: What do you think of the potential for West Elm Collective and for influencer-driven ambassador programs in general? Does West Elm and the home category face more challenges working with influencers versus fashion and beauty sellers?

Please practice The RetailWire Golden Rule when submitting your comments.
Braintrust
"As described, this initiative sounds dated... the place for authenticity is TikTok."

"I may be in the minority here, but I really feel like the days of social media influencers are numbered."

Authenticity is key in influencer marketing. Honestly, as described, this initiative sounds dated. Here’s why. First, the place for authenticity is TikTok. They should be building the strategy there and then repurposing the content back to Instagram and also to Pinterest (which is often overlooked). The general feeling among social media shoppers is that Instagram is polished and inauthentic. TikTok has a slew of DIYers, decorators, artists, first-time home buyers, furniture flippers, etc. reaching huge followers.

I may be in the minority here, but I really feel like the days of social media influencers are numbered. Most influencers lack authenticity and trust, which are absolutely critical to building long-term relationships with shoppers. I fully expect younger shoppers to begin turning away from social media “stars” before long.

You’re not. Have you seen the HBO documentary Fake Famous?

Not yet, Georganne, but it is now in my queue!

This sounds a lot like the Aeropostale Ambassador program that was in place a number of years ago. Aeropostale tapped local high school kids who were sent coupons and deals that they shared on their social media.

Does anyone other than influencers really care what influencers think about anything? Who really believes that their recommendations are authentic and not just for clicks? If the influencer is a decorator, maybe, but random people? Nope. Christine Russo nailed it: TikTok owns authenticity.

I think it’s always perilous to try to mine a vein of “authenticity.” Even ignoring the self-defeating nature of the idea, what happens if — when? — they stop liking you?

If they ever actually really liked you at all. If the influencer has hundreds of thousands of followers, but gets only gets likes in the hundreds, you have to wonder how many of those followers are organic and how many have been purchased. A high number of followers and low interaction seems suspect to me.

Or to paraphrase Groucho Marx: “I wouldn’t trust anyone who was influenced by me!”

I feel that the influencer marketing consumer is mostly Gen Z and the younger Millennials. I am not sure if that cohort is much into home decor yet. The older generation Millennials and Gen Xers are probably to be found on Netflix, Amazon Prime, and Peacock!

We Gen Xers watched “Trading Spaces” and “This Old House” all those years ago, have our magazine subscriptions now, and our tastes are set. Pinterest and Google image search get us quickly to what we’re interested in for kitchen remodels, exterior updates, etc., and “we’ve got a guy” in the vintage/restored furniture market who can get us the real quality stuff cheaper than what West Elm is pushing. Guess it’s nice to be old and invisible because keeping up with all the social channels is too much work!

Hard to project authenticity with the planning, structures, and social sites proposed by West Elm. The social shopping scene and role of influencers are highly dynamic, making West Elm’s thesis a strategic anachronism.

As was the case with Athleta/Canada, I suspect there’s a second question hidden in the first: there it was the strength of the brand more than the market, here I think it’s the medium more than the brand. And based on the poll results, there’s seems to be a consensus that the “influencer” fad is fading. So, sure, give it a try, but don’t put all the color swatches in one basket.

This influencer program sounds forced and out of touch. Getting existing influencers to approve or disapprove their products will be difficult, but is the key to reality based opinions online.

Braintrust
"As described, this initiative sounds dated... the place for authenticity is TikTok."

"I may be in the minority here, but I really feel like the days of social media influencers are numbered."