Convenience stores were the real winners of the Tokyo Olympics 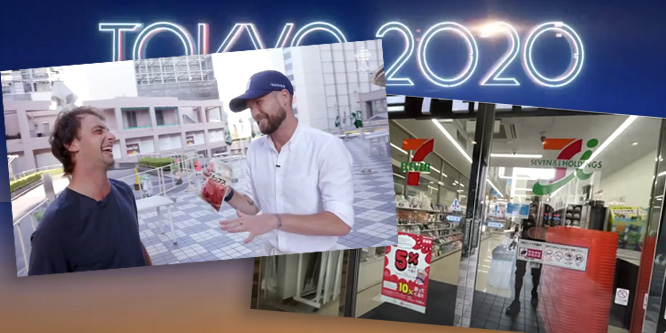 The ability of athletes and the press covering the recent Olympic games in Tokyo to move around was restricted due to an outbreak of the novel coronavirus in the city. Those limitations did not extend, however, to local convenience stores, which proved to be an eye-opener for those visiting Japan for the first time.

Anyone who has ever been to the Asian nation knows that its 24-hour convenience stores, known as konbini (or conbini — an alternative spelling), are unlike anything found here in the U.S.

Andrew Keh, a sports reporter covering the games, wrote in a New York Times article, “We can’t traverse the galaxy of food outside the Olympic limits, but a conbini contains a culinary world unto itself, a bounty of bento boxes, fried meats, sushi, noodles galore and all manner of elaborate plastic-wrapped meals and rare snacks.”

CBC Sports’ Devin Heroux made a name for himself on Twitter and across social media as he discovered the inexpensive delights of shopping at konbini locations in Tokyo.

In a video posted on YouTube with snowboarder Craig McMorris, the two taste tested a variety of products purchased at a 7-Eleven, including Pocari Sweat, a sports drink, Boss canned coffee, salami chips, rice balls and chicken on a stick from a warmer in the store.

“Who needs a restaurant,” asked Mr. Heroux after tasting the chicken.

He finished off his taste test with a sweet red bean jelly confection, which he had been advised would be “a bit of an adventure.” Mr. Heroux said it was “just delightful.”

The adventures of sports reporters and others may have been a new experience for them but is part of everyday life in Japan where there are more than 50,000 konbini locations operating 24/7. The konbini is part of the national fabric with locations offering a variety of services that go beyond convenience foods, including pharmacies, clothing, financial services and train tickets.

7-Eleven, with its parent company based in Japan and with a rich konbini tradition, has often been thought of as a likely candidate to launch a similar concept in the U.S.

The convenience store giant, which has set 20,000 as its store count target in the U.S., has experimented in recent years with its Evolution store concept, which localizes foodservice and product selection while taking advantage of technological and operational enhancements.

DISCUSSION QUESTIONS: What can the Japanese konbini teach U.S. convenience store retailers as well as those operating other food formats? Why hasn’t the konbini concept made its way to the U.S. in a big way and do you expect that to change in the years ahead?

Please practice The RetailWire Golden Rule when submitting your comments.
Braintrust
"By the description here, Tokyo’s convenience stores sound a lot like New York’s bodegas, no? "

"Konbini are fascinating! I understand that due to limited space they change their offerings in the morning (breakfast fare) to afternoon to evening."

"I plan my Tokyo hotels around how close they are to a 7-Eleven or konbini! It’s a foodie adventure every time."

There are certainly lessons that can be learned from Japanese convenience stores which are fascinating in terms of the service they offer and the innovative nature of their ranges. The extensive array of convenience takeaway options is also interesting. However there are fundamental differences between Japanese society and American society, such as Japanese houses tend to be smaller (even compared to those in U.S. cities) and therefore there is less room to stock up on products, which lends itself to more convenience based shopping as opposed to shopping in a big box retailer. Urban areas in Japan sprawl for miles and land prices are exorbitant. Again this lends itself to small retail formats with high sales densities, and the sprawling nature of cities explains why there are so, so many convenience stores.

By the description here, Tokyo’s convenience stores sound a lot like New York’s bodegas, no? The food in most bodegas may not be as innovative as in Tokyo convenience stores, but I can tell you there are several bodegas in New York that I consider destination spots for short-order breakfasts and lunches when working in their neighborhoods. And their assortments often rival that of a more traditional chain convenience store. Perhaps there are c-store lessons to be learned from both Tokyo and New York? Great, Tom, now you have me jonesin’ for fried egg and cheese on a New York bagel!

I plan my Tokyo hotels around how close they are to a 7-Eleven or konbini! It’s a foodie adventure every time.

I love the c-stores in Tokyo and think it’s great that they were stars at the Olympics. They are so successful because of Japan’s super-denseness, high cost of living and hectic pace. It’s tougher to do in the U.S. stores where many stores are drive-thru, but in high foot traffic/urban areas there’s a big opportunity for fresh, interesting options by day-part.

Konbini are fascinating! I understand that due to limited space they change their offerings in the morning (breakfast fare) to afternoon to evening. Also, they act a bit like Amazon lockers, allowing customers to pick up goods purchased online. We stand to learn a lot from this format.

One thought that kept going through my mind many years ago in a visit to Tokyo was, “Why don’t they have stores like this near me?” I’ve heard the same reaction from anyone I know that has visited Japan.

Neil’s points about Japanese culture and real estate are spot on, but I still think that a konbini-like approach and product selection would work extremely well in upscale suburbs as well as cities.

I found the konbini to be an upgrade over most bodegas I’ve visited over the years in New York. This is primarily due to the quality and selection of food choices I encountered but also because prices were really reasonable unlike in the U.S. where c-stores typically charge a significant premium to supermarkets, for example,

The underlying basic principle of all retailing is knowing your customers. As Neil pointed out the needs of the Japanese customer are different than those here in the U.S. This also creates difference in the supply chains that support the locations. The same could be said for those c-stores in the U.K.

The Japanese c-stores receive daily several deliveries from different vendors. This is possible because the stores are densely packed and so are their suppliers. That is not the case in the U.S. The typical U.S. c-store receives one to two shipments a week made by a tractor trailer. There are chains that deliver to each of their locations daily, but they are the exception. To offer the same degree of fresh foods as their Japanese counterparts, U.S. stores are transitioning to made-to-order. It is an interesting comparison but definitely not one of apples to apples.

The article and other BrainTrust commenters accurately note the cultural, demographic, physical and menu options that are different between Japan and the U.S. That being said, there is a terrific opportunity for U.S. c-stores to learn from the Japanese approach to meals. Most U.S. c-stores handle breakfast and lunch fairly well, but struggle with the dinner and late night snack day-parts. The rise in demand for sushi and other Japanese food offerings could represent a targeted fix for “what’s for dinner?”

Convenience, high-quality fresh food at compelling price points and a variety of digital services are the keys to 7-Eleven’s success in not only Japan, but also nearly all countries in Asia-Pacific. Many years ago, I worked with nearly all of the 11 primary licensees of the 7-Eleven franchise from China all the way down under to Australia. Having had the fortunate opportunity to visit nearly every country multiple times and conduct hundreds of store visits, it’s an impressive brand that has stayed very true to their core hallmarks. And in terms of the Olympic athletes, I’m sure many of them snuck away from their spacious living conditions in the village to chill out with a tasty Slurpee!

Braintrust
"By the description here, Tokyo’s convenience stores sound a lot like New York’s bodegas, no? "

"Konbini are fascinating! I understand that due to limited space they change their offerings in the morning (breakfast fare) to afternoon to evening."

"I plan my Tokyo hotels around how close they are to a 7-Eleven or konbini! It’s a foodie adventure every time."