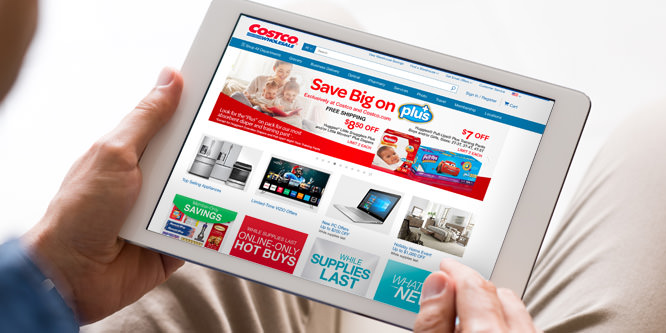 Costco is all about attracting members to its warehouse clubs. While the company has increased its presence online and even partnered with Instacart on home delivery in some markets, it has kept its focus on that objective. Even this week, when the company announced the rollout of two new delivery options, Costco maintains that attracting members to its clubs is still the goal.

Richard Galanti, Costco’s chief financial officer, announced on the retailer’s earnings call this week that the company has rolled out two new same- or two-day delivery options for club members.

“CostcoGrocery” offers two-day delivery from a selection of approximately 500 non-perishable grocery items. Boxes, weighing up to 40 pounds, are shipped using UPS to customers in the lower 48 states. Orders of $75 or more are shipped free.

Mr. Galanti (via Seeking Alpha) said many of the items that are part of CostoGrocery are being offered at a “significantly better price” than before on the company’s site and that Costco expects “to expand these offerings over time.”

Costco also announced the expansion of its same-day delivery of roughly 1,700 fresh grocery items in partnership with Instacart. The “white label” service is currently available through 376 Costco warehouse clubs with plans to add it at an unspecified number of clubs between now and the end of next year. A 10 percent fee is added to orders over $35. Costco’s CFO said pricing on products offered through Instacart is “very competitive” and “better than before.”

Analysts on the earnings call questioned Mr. Galanti on what expanded delivery would mean for club traffic.

Based on the chain’s experience with delivery in recent years, Mr. Galanti said Costco has found that members use delivery for more for “fill-in” shops. While seeing a slight decline in club visits, that has been offset by “several more shops” made using delivery. In the end, however, Mr. Galanti admitted that Costco had “very little time and data to feel comfortable about where it will go.”

Costco posted a 3.8 percent gain in same-store sales and an increase of nearly nine percent in profits for the quarter ending Sept. 3.

DISCUSSION QUESTIONS: What do you make of Costco’s decision to expand its delivery options? How do you expect this to affect its club business?

Please practice The RetailWire Golden Rule when submitting your comments.
Braintrust
"Delivery is fast becoming part of grocery retailing and even the mighty Costco can ill afford to ignore it."

"I have to say, though, they will really need to upgrade their online experience if they want this to work. That’s part and parcel, pun intended!"

"Bottom line: If the new delivery options lead to greater share of wallet from Costco customers, this will be a win."

14 Comments on "Costco ups its delivery game for online orders"

Delivery is fast becoming part of grocery retailing and even the mighty Costco can ill afford to ignore it even if it offends its “drive traffic to the warehouse” model. Given how frequently mob-scene busy Costco stores can be, there may be more demand for this service than Costco is expecting. If too many customers are interested in delivery, I think it could potentially be slightly negative since Costco relies on in-store impulse purchases to help drive average sale values.

I agree, it’s something Costco needs to do if they want to stay relevant. And they should probably expect a bigger response than they’d maybe like to see. As a Costco shopper who would love not to have to haul my purchases home, I’m all for it.

I have to say, though, they will really need to upgrade their online experience if they want this to work. That’s part and parcel, pun intended!

I believe that Costco, like many retailers, feels the pressure of having to be in the game of e-commerce. However in the case of Costco, the average consumer is probably more likely to purchase more items when going to the store than online. Galanti was realistic in saying that the company doesn’t have enough data yet to assess the success of the tactic.

I rarely visit Costco without buying at least something that wasn’t on my shopping list — either because “I need that” or “I want that.” Home delivery is likely to cut into impulse buying, but Costco has little choice but to compete in this arena.

There may be an unexpected upside for Costco: Its stores typically draw from much bigger trading areas than the typical Walmart or Target store; here in Milwaukee, the average distance between the four stores is 16 miles. The convenience factor is likely to draw shoppers who just don’t want to drive the distance to the nearest location.

I agree that online ordering could cut down on impulse buys that Costco thrives on. However, overall this is definitely a step in the right direction. Stores are often in more industrial parts of town that might not be convenient for some shoppers. On top of that, lugging bulk items home can be a bit difficult as well. Cutting down on barriers to purchases (and new memberships) is crucial for Costco as their competitors fine tune their own grocery delivery programs.

Costco is remaining competitive, which is smart. Today the customer has so many options of how to shop and get purchases. Successful retailers are the ones who realize that and give the customer a choice and let them decide. By not offering quick delivery, they run the risk of the customer shopping elsewhere for those who want that service. Going to Costco is a great experience, and I enjoy walking around the store just looking at all the merchandise. But many visits through the years have been nothing more than me stocking up on things I always purchase and usually at the last minute. So to now offer the opportunity to go online and have it delivered to me in either two days or the same day — does that make me happy? You bet it does and they won’t lose me as a customer. Furthermore, I’ll still go to their store, maybe not as often but when I do, I’ll look to make new item purchases. So yes this is wise, and I think… Read more »
3
|
0
-   Share

I really like Costco’s approach of limiting the item set for online shopping to 500 non-perishable items as they roll this out, it’s much easier to drink from a hose then a fire hydrant. I’m sure as more data comes in they will adjust and depending on demand might just outsource it all to Instacart.

Costco has little choice but to join the home delivery race. On my many visits to Costco (I might add it is one of my favorite places to shop) I see carts filled with larger and multiple cases of the same items. Many seem destined for smaller restaurants or food trucks. In some smaller order cases I can see where delivery could be a plus. But whatever happened to seeing the items before purchasing them; especially when it comes to meats, seafood or perishables?

I have to view this as a total plus for Costco. They are not losing impulse sales, they are saving sales that would go to some other e-commerce site if delivery were not offered. The “treasure hunt” aspect of shopping at Costco is indeed part of what makes the store experience terrific. You see something you were probably going to buy somewhere else anyway, but the value/quality quotient at Costco makes it so easy to just do it on the spot. Some kind of delivery component is becoming table stakes.

Costco is playing catch-up when it comes to digital ordering and delivery options. Its rival Sam’s Club has been taking orders for store pickup for years, while Amazon keeps raising expectations for convenient replenishment of household staples.

Up to now, Costco has been remarkable for its conservative approach to online selling, so the CostcoGrocery and Instacart delivery services represent a strategic departure well worth watching. It will be hard to replicate the in-store discovery experience in the digital realm, but maybe they shouldn’t even try to go down that path. Isn’t it better to position these new services options as additional reasons for shoppers to turn to Costco?

Economical delivery options may also have great potential appeal for Costco’s business customers, like restaurant owners who may want to maintain a standing order for frequently-used items.

Bottom line: If the new delivery options lead to greater share of wallet from Costco customers, this will be a win. But Costco should take lessons from those who have gone before when it implements in-store fulfillment.

Amazon and Walmart continue to raise the bar on quick delivery times and consumers are now beginning to expect same-day delivery as the normal lead-time for most products and free two-day delivery for other products. Costco and other retailers are improving their delivery services with expedited options to keep up with the Jones’s (Amazon and Walmart).

According to a new survey from BRP, 51% of retailers indicate they currently offer same-day delivery, up from 16% last year, and within two years 65% plan to offer this service. Delivery via a third-party service, such as Uber or Lyft has also increased (from 20% last year to 32% this year) as retailers look at different ways to offer customers the flexibility to shop, purchase and receive their goods on their own terms. Download the free report here.

I don’t think that adding these expanded delivery options will have a noticeable impact on Costco’s club membership activity. If anything, it is more of a defensive move to retain its membership base.

Costco is getting competitive. While they may want to keep their customers coming into their stores, they are recognizing what customers want (and are getting from Costco’s competitors). Smart move. Let’s see if the pricing strategy (10% added to the total) hurts the effort. People will pay for convenience. Just not sure a flat percentage is the answer. 10% is not a big deal on a $50 order, but a $500 order could be a bit steep.

I think this is a natural play Costco had to make to remain relevant and competitive in the current marketplace. If done right and with the right customer data analysis, Costco will understand which products and quantities their customers would benefit from getting shipped in a recurrent way and which ones will make more sense to make it more attractive for customers to buy in their club. The key here is to define the right combination play, and I foresee a great success. Agreed with the need to upgrade their digital fronts (website, mobile app) for the CX to work.

To be frank, I am really impressed with their offerings and business plan. 2017 average sales per warehouse was $170 million. That’s up 5 percent year-over-year! http://alphastreet.com/b22a1dbf

Braintrust
"Delivery is fast becoming part of grocery retailing and even the mighty Costco can ill afford to ignore it."

"I have to say, though, they will really need to upgrade their online experience if they want this to work. That’s part and parcel, pun intended!"

"Bottom line: If the new delivery options lead to greater share of wallet from Costco customers, this will be a win."