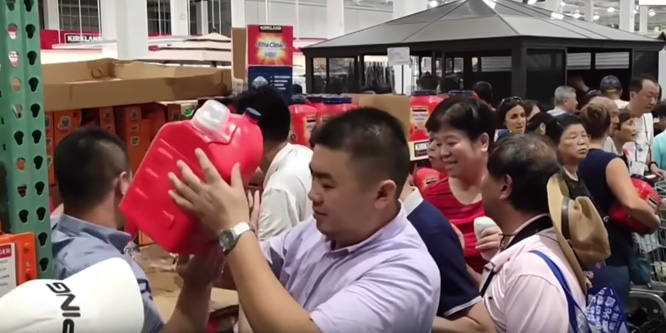 The increasingly acrimonious U.S./China trade war didn’t seem to have an impact on the opening of Costco’s first store in China earlier this week. In fact, the first location was so slammed that it had to close early on its first day to prevent pandemonium.

The opening Tuesday quickly became a mob scene, according to CNN Business. Police were called in to restore order. Costco may owe this response in part to being not entirely unknown in China. For five years, the Seattle-based retailer has been building an e-commerce presence through a partnership with Alibaba.

Video footage of the opening of the Shanghai location on YouTube recalls, at some points, the alarming scenes of doorbusters in the U.S. during Black Friday’s heyday. In one clip, a crowd of customers waiting shove at the store’s metal shutter and duck under it before it is fully raised. In another, they push and jostle to grab rotisserie chickens while store staff attempt to restore calm.

The enthusiastic opening comes against the backdrop of a possible backlash by Chinese consumers against American brands due to tensions caused by the escalating trade war.

Last Friday, President Donald Trump in a tweet threatened to raise tariffs even higher and ordered U.S. companies to exit China after Beijing unveiled retaliatory tariffs. The White House later softened an impromptu exit order by characterizing the tweet as “asking American companies to take …  a fresh look at frankly moving out of China.”

Major U.S. firms from Walt Disney, Apple and Nike to Boeing and Tesla all have significant interests in China. Starbucks, McDonald’s and KFC are aggressively expanding to meet the needs of China’s expanding middle class.

While Costco’s first-day chaos may appear to signal enthusiasm for U.S. retailers in China, at least one that has been there for some time appears to be a shadow of its stateside self.

Walmart has been in the country since 1996, but its growth has stalled at 400 stores, according to Business Insider. Visiting a Beijing location last year, journalist Harrison Jacobs characterized a Walmart store as dingy — at odds with the Chinese market’s expectations that U.S. retailers will provide high-quality shopping experiences.

DISCUSSION QUESTIONS: Why do you think Costco received such a strong initial reception in China? Do you see the trade war impacting China’s appetite for U.S. stores or brands?

"Trade wars aside, the Chinese consumer certainly is very open to U.S. and Western-based products."

"Chinese consumers are country-agnostic. They love world brands just like Americans do."

8 Comments on "Costco’s first day in China gets wild"

The trade war may slow down the Chinese appetite for U.S. stores and brands, but China is very good at waiting. Right now, China is doing what good leaders teach their people to do: keep your head down, focus on what’s important to you, worry about you. China is investing in itself – but that doesn’t mean U.S. brands will not continue to be of interest to them.

The one thing that is universal in our world is that consumers love a good deal, the treasure hunt, and because of that physical retail is going to remain alive and well. It’s not surprising that Costco has hit the ground running in China, where the middle class have risen thanks to the emerging Chinese economy.

Costco appears to have taken a crawl-walk-run approach with their China expansion, Their e-commerce partnership with Alibaba absolutely has provided plenty of valuable consumer insights, which have been leveraged to provide an outstanding in-store experience. It will all come down to the execution side, and Costco appears to have started on the right path.

Trade wars aside, the Chinese consumer certainly is very open to U.S. and Western-based products,

I think this is less a function of Costco or Walmart’s retailing brilliance than it is of utterly irrational consumer behavior. The chaotic scene like the one portrayed in this video makes we wonder about the future of humankind. If these were refugees fighting for survival, the mayhem would be completely understandable. Shoppers looking for a cheap laundry detergent – sad.

Chinese consumers are country-agnostic. They love world brands just like Americans do. They love anything that is new and innovative. There are no borders to their mindset. Costco offers something they don’t have and meets a need just like in the U.S. And Costco (like Walmart and Starbucks) is smart enough to adapt to the appropriate Chinese culture and needs.

Consider this: the #1 sport in China is basketball (China has 600 million NBA followers. Six-hundred million!). The #2 sport is football (soccer to Americans). The box office for Avengers: Endgame was larger than in the U.S. Taylor Swift’s new album sold more in China than the U.S. General Motors sells 3.6 million autos in China and just 2.9 million in the U.S. Volkswagen sales in China exceed 4.2 million annually.

For the same reason they are popular in the U.S., if not quite so exuberantly. Longer term, of course, is harder to predict. Happily for Costco as well as other firms, I’m guessing most Chinese are viewing the “trade war” as a personality rather than a patriotic cause, as do of course many Americans.

Whether this will continue indefinitely, I don’t know, and that’s on top of all the normal complications of operating in a foreign market, not to mention just operating a business in a competitive environment, period. I’m certainly not pessimistic, but maybe a little more wary than some of those polled.

Given that one of the most successful Sam’s Club locations in the world is in China, this is no surprise. The wholesale club format is idea for urban settings in China, where the population density and income levels are conducive for the format. In addition, access to products from other parts of the world are exciting to the Chinese consumer. As for the trade war, that’s between our governments … not our citizens.

"Trade wars aside, the Chinese consumer certainly is very open to U.S. and Western-based products."

"Chinese consumers are country-agnostic. They love world brands just like Americans do."