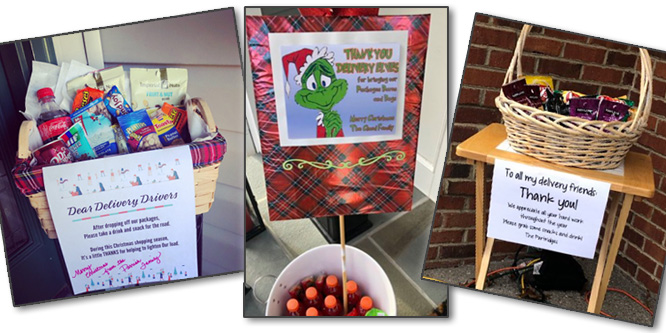 For more and more shoppers, the sales associate with timely advice or cashier with a smile is no longer their favorite retail helper in the purchasing process — it’s the delivery driver.

The change is evident in the rise in appreciative messages left on doorsteps for UPS, FedEx, USPS and Amazon drivers along with baskets full of snacks and drinks over the holiday season. The sightings, also cited to a lesser degree over previous holiday selling seasons, were noted by Business Insider, Today Food, Delish and Daily Mail as well as a number of consumer and family-oriented sites commending the efforts. Many photos of thank you notes and goodies were shared across social media by both givers and recipients.

A driver who just start working for me this fall sent this photo. He was pleasantly surprised to see this kind gesture made by a customer he was delivering to this week. He wanted me to say thank you to all that remember their delivery drivers this season @UPS @IllinoisUPSers 🙏🏻 pic.twitter.com/0MLH3Km8AY

Customers today count on delivery drivers to take extra steps to make sure packages are not stolen or left in inclement weather conditions.

With another record level of holiday shipments expected, drivers no doubt appreciate the refreshments as many don’t have much time breaks.

Retailers, however, aren’t typically the recipients of these shows of affection for the service they provide. A number of food establishments, which use on-demand services such as GrubHub, Postmates and Uber Eats, are looking to take delivery in-house largely due to the heavy fees involved, but also partly because of concerns over food quality, according to QSR. Some remain wary of the hurdles involved in establishing in-house delivery.

“It’s tricky,” Nick Vojnovic, president of Little Greek Fresh Grill, a franchisee with about 40 locations, told QSR. “We just don’t have the volume to support it.”

Most traditional retailers are using outside carriers. Target in late 2017 acquired same-day delivery start-up, Shipt, and Kroger and Walmart are experimenting with grocery delivery. With its own trucks and on-demand Amazon Flex program, Amazon is far ahead but still largely relies on third-party delivery. According to estimates from Ship Matrix, 62 percent of packages from Amazon arrive from USPS, 21 percent from UPS and eight percent from FedEx.

DISCUSSION QUESTIONS: Are the holiday thank you notes for delivery drivers a sign that third-party carriers are the optimal handlers of online delivery or that delivery should be brought in-house? Do you see in-house delivery becoming more essential in the near or long term?

Please practice The RetailWire Golden Rule when submitting your comments.
Braintrust
"Smart retailers will concentrate on doing only what they do best. Last-mile delivery is rarely one of those things."

"No. A thank you note or gift is not reflective of the status of third-party carriers and how they stand compared to in-house carriers."

"Well, if you were to ask my dog, Blu, for her vote she’d say that Sue, the UPS driver, simply cannot be replaced."

Well, if you were to ask my dog, Blu, for her vote she’d say that Sue, the UPS driver, simply cannot be replaced. I swear she knows the UPS truck is coming from a mile away. Of course the fact that Sue always has dog treats has nothing to do with it.

Given that we’re coming to expect delivery of a product within minutes of ordering it, trying to replicate third-party services for something as complicated as delivery is a huge risk. If that breaks down so does your business.

One of the tenets set down by the founders of the Mars companies that I remember best is (or was) “we do only what we do best.” Smart retailers will concentrate on doing only what they do best — that special “something” that adds meaningful value to their business proposition. Last-mile delivery is rarely one of those things.

No. A thank you note or gift is not reflective of the status of third-party carriers and how they stand compared to in-house carriers. In fact, most people are not aware of who their delivery driver is for most of their packages. Nor do they care. Customers are concerned with the timeliness and condition of their packages. No more. No less. This is what delivery services are tasked with doing, and reflects the expectations of both the customer and the client. In the future, we can expect to see a continued competition between all of the delivery services as cost of delivery continues to be a concern.

Delivery staff are the face of their employers. When they represent the optimal delivery experience for the recipient, kindness is a good thing with which to reward them when a job is well done.

I think most of the delivery people who have been reliably dropping items at our front door this season deserve at least a “high-five.” A bottle of water and a granola bar is a nice touch — wish I’d thought of it.

That said, I’m not a big fan of third-party delivery of groceries, and I believe any model that inserts another brand between the supermarket and its shoppers is unwise and ultimately unscalable. Restaurant deliveries are a separate use case that makes more sense for independent restaurateurs especially.

At a certain scale, grocery home delivery services could have the capacity to act as last-mile carriers for other local businesses. The tipping point would be reached when the grocery vans are visiting every neighborhood within a trading area on at least a daily basis. The incremental cost of third-party deliveries would be very low, enabling very attractive economies. I proposed this model very early — perhaps it’s time for a second look.

Uhmm … over-extrapolate much? No I don’t think the (quite anecdotal) “evidence” of a few notes, etc. should be interpreted beyond a few people sharing Holiday Spirit.

As for in-house delivery services, it probably makes sense for “food establishments” (restaurants?) — which is why we’ve long had in-house pizza deliveries. But it’s unclear for other types of merchandise. There are certain economies of scale and efficiency that common carriers develop that would probably be hard to match. IIRC back in the days when department stores delivered, most of them turned over the business to UPS … I doubt things have changed.

Gifts have been left for centuries to our postal carriers, but that doesn’t mean postal delivery is the best or only format. This is about goodwill by recipients during a time when goodwill is top of mind.

Braintrust
"Smart retailers will concentrate on doing only what they do best. Last-mile delivery is rarely one of those things."

"No. A thank you note or gift is not reflective of the status of third-party carriers and how they stand compared to in-house carriers."

"Well, if you were to ask my dog, Blu, for her vote she’d say that Sue, the UPS driver, simply cannot be replaced."