Did Amazon wrap up Christmas in July? 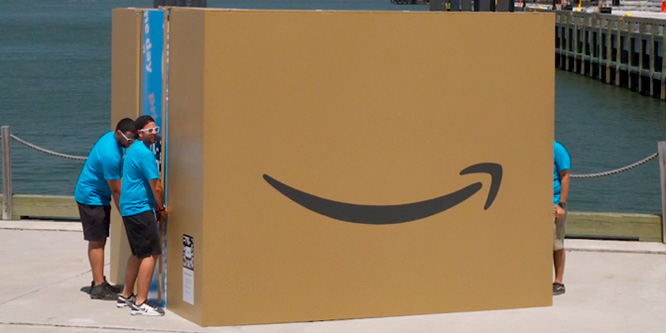 Many have come to bemoan the Christmas creep phenomena as retailers put out ornaments and fake trees on store floors in October, but the truth is that a lot of consumers start shopping for the holidays even earlier — say July — and capturing those purchases has become increasingly important for the top and bottom line performance of retailers.

Research from Valassis shows that 40 percent of U.S. consumers completed at least some of their Christmas shopping during Amazon.com’s Prime Day 36-hour shopping event on July 16 and 17. The survey, which included 1,000 consumers who purchased Christmas gifts, found that the event was particularly effective among younger consumers between the ages of 18 and 34. Nearly one in five in this group completed at least 25 percent of their shopping during the Amazon sales event.

Amazon reported that this year’s event was the biggest ever for the platform with shoppers purchasing more than 100 million products overall. Third-party sellers on Amazon’s marketplace generated revenues of over $1 billion from Prime Day.

Amazon’s rivals, for the most part, did not sit idly by during Prime Day, so it’s not yet clear what sales made in July will mean for their Christmas results. Target, for example, ran a sale on July 17, which the chain reported as the single biggest online shopping day up to that point in 2018.

Online sales have become an increasingly important element in driving revenues and market share for retailers during the Christmas selling season. Rakuten Intelligence found that five of the top 10 brick and mortar chains — Best Buy, Costco, Kohl’s, Target and Walmart — grew year-over-year online sales more quickly during the 2017 season than did Amazon with its 24 percent gain.

DISCUSSION QUESTIONS: How important are online sales made in July to the overall share of retailers’ holiday sales? Will findings such as those in the Valassis study lead even more retailers to promote “Christmas in July” sales events?

"The reality is that consumers have short memories and five or six months is a lifetime. They will spend this holiday season."

"I think online sales in July are more about creating shopping “habits” than they are about cannibalizing Q4/holiday sales."

10 Comments on "Did Amazon wrap up Christmas in July?"

Honestly, I don’t think all that much spend is pulled forward to July. People may do a bit of gift buying if they see something appropriate, but it is not all that significant. Most holiday shopping still happens after Thanksgiving.

I think online sales in July are more about creating shopping “habits” than they are about cannibalizing Q4/holiday sales. The more often people shop your brand, the more comfortable they will be returning to your brand (assuming, of course that the experience and the product met their expectations). I would encourage retailers to fight the good fight against Amazon in July so that they can take advantage of the opportunity to establish shopping behaviors and build trust with shoppers that will make them viable options for whatever budget holiday shoppers still have left come Q4.

Christmas in July promotions are nothing new and go as far back to the days of Crazy Eddie. However, the bulk of holiday shopping will always remain close to Christmas for two reasons: 1.) we get into the holiday spirit and no matter what we may have already purchased we still hunt for those last-minute items and 2.) we all know that the closer we get to Christmas the better the prices, not to mention the days after Christmas.

Christmas shopping is a chore but, for many, it’s also fun, and many consumers enjoy it whether they’re doing it in-store or online. I don’t see the shopping patterns changing anytime soon — if ever.

Christmas in July is not a new idea, retailers have often run promotions mid-summer or other times of the year to increase sales during slow traffic periods. What’s new is Amazon’s increasingly popular Prime Day and the efforts of other e-commerce sites to mimic it. I don’t see those summer shopping days cannibalizing from Q4 holiday sales however. Consumer confidence is very strong this year and e-commerce sales are expected to have strong growth this holiday season.

Christmas is not the only gift-giving occasion, even though it is the biggest occasion. Consumers purchase items for birthdays, anniversaries and other special occasions throughout the year. Sales throughout the year can tap into these shopping patterns. Christmas in July has been a common phrase and Amazon was clever to tap into it. However, not all sales need to mention Christmas to encourage consumers to shop for Christmas. Promoting Christmas shopping all year long will certainly antagonize consumers.

It is true that the holiday shopping “season” is starting sooner every year. It is hard to believe that people think about Christmas in July but, when retailers are promoting that mentality, it works for some consumers, especially if they feel that the bargain is the best they will every find.

The good thing for retailers is that when consumers start buying for the holidays in the summer months, their total spending for the holidays may increase, as they will still buy a lot in November and December after they have saved more money. The reality is that consumers have short memories and five or six months is a lifetime. They will spend this holiday season.

Christmas in July — as others have already noted — isn’t a new idea, nor will it replace holiday sales. Lots of people buy on Prime Day, but a lot of them are buying for themselves. Your average condo or apartment dweller, for example, isn’t likely to do the bulk of their holiday shop in July and then store all those gifts for five months. So, important? Yes. Mission critical? Probably not. As to the second question the answer may be a tentative yes, but again these sales may be used by shoppers as an excuse to buy themselves more products. The real question is as “holiday” now effectively runs from sometime in October through the first few weeks of January is it still what we used to think of as the holiday season any more? And more concerning, will younger shoppers tire of the over-commercialism more quickly than their parents or grandparents did? If so, this endless promotional cycle may backfire one of these years.

I think it is fairly safe to say that Amazon accomplished a lot beyond sales (Prime Day), with the introduction of technologies of Alexa, Echo, Prime TV …. on and on. That’s nearly saturation of the market. People will always shop early for Christmas if compelled by some value proposition. I do think there will be some serious competition in the online Christmas efforts for Amazon, as giants like Target, Walmart, and others put an aggressive stance on their desire for market share growth online.

I’m quite skeptical of the survey results. Consumers are particularly inaccurate in responding to questions like this. In my experience, the answers are so unreliable the questions should not have been asked and we shouldn’t pay attention to the data.

Amazon’s Christmas in July probably did more to encourage back to school purchases, in addition to other purchases than just holiday purchases. The sheer number of holiday purchases done over the traditional holiday period will probably not decline by the same fraction of 40% that this article uses for its basis. Instead, we can probably see year over year increases, with no declines, which causes some questioning of the impact of Christmas in July sales events.

"The reality is that consumers have short memories and five or six months is a lifetime. They will spend this holiday season."

"I think online sales in July are more about creating shopping “habits” than they are about cannibalizing Q4/holiday sales."