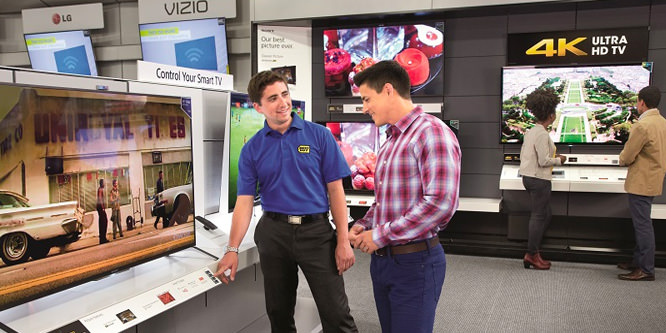 Shares of Best Buy took a hit yesterday after the consumer electronics chain announced a decline in same-store sales for the holiday quarter and forecast the same for the first quarter of 2017 due to a softening mobile phone category. While lower comparable revenues are a concern, Best Buy also came out of Q4 2016 with a 27 percent gain in profits while continuing to grow its online business. So did Wall Street overreact?

Count Charlie O’Shea, the lead retail analyst at Moody’s, as one who sees more positives in Best Buy’s performance than negatives.

“Best Buy’s ability to expand margins in Q4 in the face of what we characterized as one of the most promotional holiday seasons we have seen in the last 15 years — especially in Best Buy’s key product categories —is impressive, and indicates that the company maintained significant discipline over its pricing, avoiding the trap of chasing sales,” wrote Mr. O’Shea in an e-mail to RetailWire.

“Online sales growth of almost 18 percent on an already meaningful base is impactful, especially as it results in an online percentage of overall sales rate of almost 19 percent,” he added. “We continue to believe that Best Buy is one of the brick-and-mortar ‘leaders’ in the push online, and expect the company to continue to make incremental progress in its quest to become a true multi- and then omnichannel retailer.”

Best Buy CEO Hubert Joly is also optimistic about the company’s prospects. On an earnings call with analysts yesterday, Mr. Joly announced (via Seeking Alpha) that the “Renew Blue” turnaround plan introduced in Nov. 2012 was “officially over” and that the next phase in its strategic direction called “Best Buy 2020” would concentrate on “creating a company that customers and employees love.”

“We believe we can and should go beyond selling products to customers,” said Mr. Joly. “We want to focus on their underlying needs which is entertainment, communications, security, energy management, and health. We believe this approach will better meet their needs, and build a stronger relationship with them. This will also allow us to expand our addressable market.”

DISCUSSION QUESTIONS: Do you see Best Buy’s fourth quarter performance as grounds for optimism or pessimism? Do you think Hubert Joly has set the right strategic direction for the company going forward?

Please practice The RetailWire Golden Rule when submitting your comments.
Braintrust
"We must stop obsessing about store comps. That's a metric for a past world and the metric we most need to change with online sales evolution."

"One day does not a stock make, and Best Buy shares are bouncing back today. Wall Street traders tend to overreact in both directions..."

"Wall Street got it wrong on this one."

Being based here in Minneapolis, retail conversations always include Target and Best Buy. Nobody would have guessed three years ago that Best Buy would be celebrating and Target would be struggling at this point! Best Buy has significant support from Samsung along with a general category whose new IoT products require consumer education. The next big challenge is to see how innovative Best Buy (and Target) can get with delivering the expected customer experience while acknowledging shoppers have done the online research (Google’s ZMOT) before walking into the store. Inventory visibility and geomarketing will need to become part of the mandatory in-store elements.

First, Wall Street is a very poor gauge of whether a company is doing well. They reward Amazon for any tiny profit then punish traditional retailers despite profit. There’s no business basis in Wall Street.

But what about Best Buy? We must stop obsessing about store comps. That’s a metric for a past world and the metric we most need to change with online sales evolution. The store now plays a dual role — sales channel but also physical element that increases online sales.

But given how long it takes Wall Street to evolve, it will be another decade before stock prices are based on the more sane view of sales as we evolve beyond the mythology of comps.

I couldn’t agree more, Doug. Wall Street is like any other game of chance. It’s based on perception only and has little to do with reality.

You got that right Doug. I couldn’t have said it any better. And that’s my 2 cents!

I have a lot of admiration for Joly. No one thought Best Buy had a chance a few years ago. While the soft top-line is concerning (and understandable), he’s protected the bottom-line and that is impressive as a multichannel retailer.

CES has a cloudy future at retail. Ford installed its last CD player in a car. But technology will only become more embedded in the lives of folks as digital natives mature.

I think Joly’s plan that got him to turn around Best Buy worked. I trust him, and his organization,vto successfully pivot from turnaround to industry-leading category performance.

Wall Street got it wrong on this one. Given where Best Buy was a few short years ago, the fact that they could manage increased profits on lower sales during a holiday season is a very admirable accomplishment! While I think Best Buy still has potential areas of improvement in their stores (in product assortment and store layout) they are making many positive moves in becoming more customer focused and delivering on omnichannel promises. They are generally price competitive and certainly seem to be executing well on their strategy. Are they 100 percent successful? No, as evidenced by their top-line performance issues, but the path they are on looks to be a good one.

One day does not a stock make, and Best Buy shares are bouncing back today. Wall Street traders tend to overreact in both direction, but I see the company’s strategy under Mr. Joly and their fourth quarter performance as indicative of a stable outlook for the year — which would be significant in itself given product availability issues and extreme price pressures. Mr. Joly’s three growth pillars are sound as they address customer needs and how they shop while working to reduce cost and drive efficiencies. Best Buy has come a long ways since 2012 when it was on the brink of collapse. With the “Renew Blue” program, Mr. Joly set the company’s turnaround on a more firm footing. He’s now moving to the growth phase with the “Best Buy 2020: Building the New Blue” program. One area that has more potential for the company is the Geek Squad and in-home advisers. Anytime you can eliminate decision complexity or provide care-free installation and integrate all of this in a one-stop shop package, from a workflow… Read more »
5
|
0
-   Share

The fact that Best Buy is still here and somehow making money speaks well for the executive management team. Their market is swamped with e-commerce blow-out deals making margin a very difficult accomplishment. But I am of the opinion that crystal balls and fancy footwork only sees results in Hollywood. The reason for their relevance might be as simple as providing consumers with the ability to visit and sample various technologies for scope and selection practicality. There is also the ability to furnish quick reaction in store service. Add to this the fact that the brick & mortar competition has thinned out significantly over the past two decades and you have the survivors doing what they have done best, surviving. The land of milk and honey is now focused on time and money and its new name is Wall Street. To underscore this, I submit that the majority of professional and/or big stakes investors know very little or nothing about what their holdings actually do. Their goal is more for less dollars. Much like retailers… Read more »
1
|
0
-   Share

I think there are a lot of reasons to be bullish on Best Buy, beyond their latest quarterly results. As the leader in consumer electronics, they are in the epicenter of IoT and they are focused on leveraging their broad footprint of stores and their technical expertise to be a trusted advisor for consumers.

And their stores are far better to shop in this year. We shouldn’t underestimate the power of stores that “make sense.” For a while the clutter and chaos made it a place to avoid. Much better this past season.

Braintrust
"We must stop obsessing about store comps. That's a metric for a past world and the metric we most need to change with online sales evolution."

"One day does not a stock make, and Best Buy shares are bouncing back today. Wall Street traders tend to overreact in both directions..."

"Wall Street got it wrong on this one."