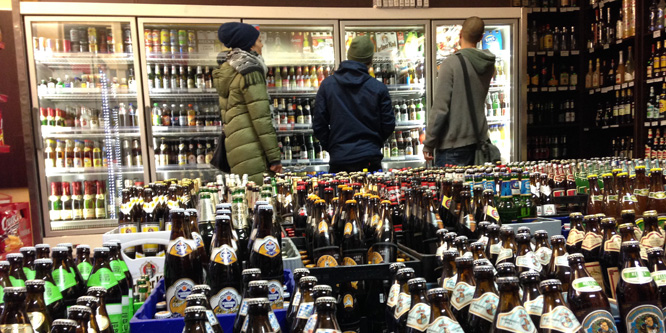 A new study finds only 42 percent of owners and managers of independent liquor stores see them as viable in the long term.

The study from Drizly, the e-commerce platform that partners with independent liquor and wine stores, was the first done with independent retailers. The respondents expressed the dour outlook even though two-thirds reported higher sales in 2018.

Reasons for the grim prediction include:

Chain competition: Competing against larger chains was seen as the biggest challenge of running an independent liquor store, cited by 42.6 percent of respondents. The next three were driving traffic/customer volumes, 15.3 percent; rising rents/overhead, 13.1 percent; and staffing, 12.6 percent. Big chain competition includes Total Wine, with 205 locations, as well as discounters, clubs and grocers. However, the study noted that regulations over the sale of alcohol have led independents to continue to play a dominant role compared to other retail channels. Online competition is a minor concern. Forty-five percent of consumers believe buying alcohol online may be illegal.

Product trends: Bourbon, IPA and rosé are expected to remain major sales drivers. Organic and natural wines are gaining traction, as well as modernized non-alcohol beverages overall. The category has recently benefited from some crazes, including spiked seltzer, wellness beer and wine in a can. Drizly’s report showed independents may be slow in reacting to today’s fast-moving trends. Owned sales data was the primary factor behind short term inventory decision making (34 percent), while trend reports rank fourth (14 percent).

Demographic trends: Drizly didn’t explore demographics, but studies have concluded that Millennials are behind slowing sales for the industry in recent years, and Gen Z are predicted to be even bigger teetotalers. Embracing healthier lifestyles, favoring marijuana and a desire for control amid social media’s glare are cited as some of the reasons behind Millennials’ alcohol moderation. Contrarians believe it’s too early to gauge Gen Z’s drinking habits, and some point to evidence that Millennials are drinking more as they have children. Drizly’s survey found 70 percent of independents citing social media as the most effective marketing tactic for making and retaining customers, ahead of in-store events (64 percent) and offering delivery (62 percent).

DISCUSSION QUESTIONS: Do independent wine and liquor stores need to reinvent themselves for Millennials and Gen-Z? Do you see challenges in the years ahead for independents and the overall alcohol industry?

Please practice The RetailWire Golden Rule when submitting your comments.
Braintrust
"[Independents should] know that I am always interested in good single barrel anejo tequila when I walk in the door!"

12 Comments on "Do independent liquor stores need a rehab?"

As in most retail situations, it’s all about the experience. A good independent wine and liquor retailer has the knowledge and expertise to recommend exactly what you may be looking for as well as the appropriate pairing with foods. One only need to visit Astor Wines in NYC to understand that there will always be a place for those that make the extra effort. Shoppers will reward you for it.

Of the threats mentioned, chain competition deserves its place at the top. My local Walgreens store happens to have the best price on my favorite wine (beating Walmart by $2 and with a discount for four or more, no case required). Once again, it boils down to diversification. Multi-category retailers can move and groove; category killers are more vulnerable than ever as chains attack frequently-purchased categories like wine and liquor in order to drive trip frequency. I’ve seen that some mid-sized liquor chains are exploring cannabis, however single store operators are in a difficult spot. Their best move is to kill with convenience — drive-thrus, curbside loading, delivery and always quick and friendly checkouts. Not everyone wants to traverse a football field to grab a six pack. In-store events are another option that resonates with Millennials and Gen Z, but that many operators leave alone.

Perhaps the bigger threat to ALL wine and liquor stores is marijuana legalization. Media friends in Colorado, where weed has been legal for nearly six years, report the state has seen flat to lower off-premise sales of alcohol. And this during a craft beer/whiskey boom. If I were the owner of an independent wine and liquor store in a state that hasn’t legalized pot yet, I’d be looking into switching to that business.

Hemp-infused brews could be the big opportunity, but complying with regulations for both weed and alcohol may present a conundrum.

This is only going to get tougher for independents as relaxed liquor distribution restrictions spread across the states. Control of tax revenue will shield them somewhat, though this is most prevalent in states that restrict liquor distribution to state-owned stores. The obvious beneficiaries of these trends are the chains like Total Wine that can leverage volume buying. Total Wine recently moved to our mid-sized urban market and I’ve had a few local bottle shops tell me they are being “Walmart-ed”. That’s true to an extent — but Total Wine is also providing a better overall experience. Besides huge selection and good price, they offer weekly classes in a dedicated event room that feature multiple tastings of a liquor or regional product. There is usually five or six sampling stations in the store on the weekend. The retail associates on the floor specialize in a segment and are quite knowledgeable overall. And the customer service comes as close to matching my local bottle shop as a chain can. Short of the very high end wine shops… Read more »
3
|
0
-   Share

Ben — Everyone knows that you are looking for a good price on “Mad Dog” when you walk in the door. But seriously, I think you’ve nailed this one. The arcane post-Prohibition rules that set up the three-tier distribution model protect any number of bad business — and ultimately anti-consumer — practices. Once those antiquated laws are changed, many independents and distributors are going to be in trouble. And spot on again about the need to differentiate, always an independent operator’s most potent secret weapon. Finally, completing your rhetorical troika, it’s clear that in the future the only things that will save undifferentiated independents will be proximity/location and convenience. Also, as Ron mentioned, there’s no question that once price normalization occurs, the cannabis market will take a significant bite out of the entire industry. The thing I found really interesting about this study is that apparently having kids drives you to drink, a conclusion most parents can independently confirm.

Seems like Gary V‘s family wine business is doing fine so I think it’s the same case as with any business – what’s important is the skills the owners have or hire.

There is still a market for independent liquor stores, just as there is a market for locally-owned hardware stores. (And yes, most of those stores have the combined buying power of Ace or True Value.) The customer who shops those stores is choosing personal service and convenience over the massive assortments of the big box DIY stores.

The same can be said for the neighborhood wine and liquor store that puts the effort into product knowledge and extra services. It’s hard to beat Costco on wine prices, and Total Wine on breadth of assortment, but shoppers don’t always want an extra half-hour’s drive for a good bottle of wine or liquor.

In Texas, liquor stores are one of the big winners (along with restaurants) of many counties and municipalities striking down archaic dry liquor rules. A lot of independents do well – there are the chains here like Total Wine and More, Twin Liquors, Specs and the like but, as was mentioned before, retail experience and convenience is what makes or breaks who is selling to you. Many of the independents here have been in business for 20+ years and are doing well. Pricing is good, assortment is exceptional, and they offer good advice and have wine chillers just in case you need one.

Independent liquor stores suffer the same challenge that other food and beverage retailers of all sizes do. They haven’t fundamentally evolved their merchandising to keep up with today’s consumers. They are literally arranged the same as they were 50 or more years ago. However, grocery stores typically look the same. This is all about merchandising for today’s shoppers.

The current inventory drivers include manufactures, distributors, friends in the business and industry reports. Notice how the consumer is left out. What we need here is to forgo quantity extra schedule pricing and open our eyes to turn. If turn is what you need and want what better information source is there other than the customer. Simple questions at the tasting tables like what didn’t you find and what would you like to see and/or try might help. Simply ask the customer(s) and fill in the paper yourself then offer a smile and a thank you.

We have long history working with the adult beverage industry. The challenge is understanding the local nature of their markets. Yes stocking mega brands is a no brainer, but once you get past Jack…. Another critical issue is about making women feel comfortable — from the store hygiene to helping get the purchase to the trunk of the car. Men buy for themselves — women buy as hosts.

Braintrust
"[Independents should] know that I am always interested in good single barrel anejo tequila when I walk in the door!"