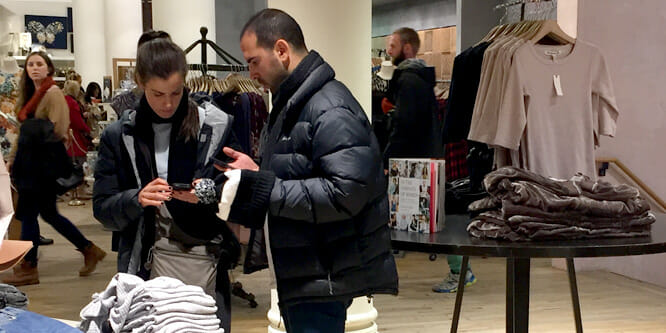 Men are not embracing online shopping as much as women and are more likely to shop in-store at full-price retailers, according to a survey from First Insight.

Among the findings from a survey of 1,000 shoppers conducted in December:

Women also more likely to regularly visit TJ Maxx, Marshalls and Home Goods, although both genders are equally likely to use discount websites.

In a statement, Greg Petro, CEO of First Insight, said disruptive technologies, such as mobile price checking, and the expansion of discounters are “making the majority of shoppers more price sensitive.” Yet women and men are reacting differently to the changes and stores need to “align their in-store selection and pricing to meet consumer appetites.”

For instance, Mr. Petro tells CNBC, men should be shown more items in store since they likely haven’t done as much pre-research online. Women might be shown more of a curated best-seller mix at the store level since they’ve already done their research and are likely to make a decision online later.

“Men are destination drivers,” Mr. Petro told CNBC. “They go in stores to touch and feel. They like to execute a deal [at stores] and then bring items home with them.”

He added, “I think the data suggests women are more price sensitive and more bargain hunters.”

DISCUSSION QUESTIONS: Do you think the purchasing behaviors of men and women have become more similar or dissimilar in recent years? Do you feel retailers need to do a better job segmenting by gender?

Please practice The RetailWire Golden Rule when submitting your comments.
Braintrust
"The buying habits of men and women have not changed. What has changed is the technology both employ as a part of the purchase process. "

"...catering to a specific aspect of a gender can exclude others of the same gender who may not fall into that actual demographic."

"Putting aside the hunter/gatherer ancient knowledge we could pull from, modern women socialize each other to be better at this..."

12 Comments on "Do men and women still shop differently?"

As far back as I can recall, women have always been more price-conscious than men, more thorough in their researching of what they want to buy than men and tend to make less impulsive decisions. So I don’t see much change here other than how men and women are responding to online opportunities. The bottom line is most men aren’t as patient as women and want to move on rather than take time to read, search and research what they’ll buy. That’s not a criticism that’s just the way it is. So the lesson for retailers here is to have your stores staffed with well-trained associates who can help the man purchase by showing him the right merchandise and also to build the sale. Retailers will soon see a nice increase in profits and less lost sales.

Greg’s predictive insights are powerful and valuable tools. As with all power tools, be careful how you use them.

The proliferation of two-income households, along with other demographic and gender-centric shifts, may neutralize gender differences in purchase behaviors.

We have more data and better analytical tools than ever before. It will be interesting to see how this data leads to informed decisions.

(Disclaimer: We are clients of Greg Petro’s First Insights company.)

While I think there is some truth in this, I’d be cautious at reading too much into a survey based on 1,000 people. If the sample was nationally representative, it means 513 women were compared to 487 men.

That’s not to say men and women don’t shop differently — they often do. However, there is much variance within that with, for example, younger shoppers behaving more similarly than older ones.

I think the purchasing behavior remains the same. It is true that women, especially since the introduction of the smartphone love to browse for a good deal, whereas men want to touch and feel. I already think that retailers do a good job segmenting by gender.

What the research indicates is that the buying habits of men and women have not changed. What has changed is the technology both employ as a part of the purchase process. Where pre-store comparisons were once based on newspaper ads and catalogs they are now based on electronic devices.

A survey of 1,000 people does not give me a great level of confidence but, that said, I do agree that men shop differently than women. The big reason is that most men don’t love shopping, especially for clothes. They just want to look at a few options, like one or two, not five, buy it, and be done. I don’t agree that women are more price-conscious than men, but would agree that women are more price “aware”, meaning that indeed they will have done more exploration online so that they have a better sense of prices that look too high or too low for that matter.

Women and men do shop differently, first and foremost, MEN DON’T HUNT when it comes to shopping. They live on the premise of “what does it do, why do I need it and how much is it.” Applying any more effort than this is not traditionally how men shop. Hence, when shopping for discount merchandise they are not ones to shop in off-price retailers and more likely to shop in outlet specially stores. While traditional shopping behaviors of men and women have generally remained unchanged over time, even with the advent of technology as the article suggests, it would be prudent for retailers to fully understand their target markets before making significant changes in the gender segmentation. For example, the target markets of Millennials and Gen Z have a broader segment of non-binary which is people who do not identify with either gender. In this case, retailers who have these target markets may want to develop strategies that create opportunities of less segmentation whereas the target market of Boomers may want to keep segmentation based… Read more »
4
|
0
-   Share

You always need to be careful when lumping huge demographics of shoppers together, and making blanket strategies to address what you THINK is the truth about them. Although this survey may show some similarities among shoppers of each gender, as a retailer, I would offer complimentary shopping choices for any shopping mission. Sure, some people are more visually-driven and/or tactile-driven when shopping. However, catering to a specific aspect of a gender can exclude others of the same gender who may not fall into that actual demographic.

Putting aside the hunter/gatherer ancient knowledge we could pull from, modern women socialize each other to be better at this, and current norms necessitate that they carry the burden of managing their household (invisible labor) often on top of other visible labor (another job). These stats just tell me that men need to pick up the slack of price-comparing and managing their household’s finances to meet women’s shopping burden in the middle somewhere.

While yes, men and women do shop differently, there is a risk in reading too much into this survey. For example, a big omission in my opinion is an age breakdown. I suspect if you separate the demographics by generation you’ll find slightly different trends, where, for example, younger Gen Z and Millennial generations show fewer differences between men and women and older generations (Gen X, Boomers) start to diverge more and more. We see some insights on how each gender uses technology to shop, but I think the conclusions are too general for retailers to adjust their strategies based on the possibility of knowing something about their customer versus knowing something concrete from their own analytics. I see two things being reinforced by this study: 1) Retailers need to understand their customer — who they are, what they need/want, and why they buy. This is not a change from anything smart retailers know. LEaders here are leveraging their data analytics to make smart conclusions about their customers. 2) Retailers need well-trained, well-enabled associates that… Read more »
1
|
0
-   Share

It is hard to say if the level of differences in purchasing behaviors of men and women have changed in recent years, but there is no arguing that there are differences (“Men Are from Mars, Women Are from Venus”). I still believe we have hardwired hunter/gatherer tendencies that contribute to men bringing home the product while woman tend to be more contemplative and gather the information before making the purchase decision. Retailers’ analysis of shopping behaviors and segmentation though must go beyond gender to personas and ideally to individuals as we morph to more gender neutral roles.

Too many product variations and choices deter men from shopping online. And yes, women love many product choices, but at the end of the day, both men and women are either overwhelmed or do not have the time and energy needed to invest in the search process of online shopping. The evidence, very high return rates. Women buy 4 dresses to possibly find one dress they like, while men — not interested in the time-consuming search and disappointing prospect of the return process — prefer to run into a store and get their immediate needs met.

With all the shopping technologies developed to date, none take into account sensory-preference matching individual people to individual products.

Braintrust
"The buying habits of men and women have not changed. What has changed is the technology both employ as a part of the purchase process. "

"...catering to a specific aspect of a gender can exclude others of the same gender who may not fall into that actual demographic."

"Putting aside the hunter/gatherer ancient knowledge we could pull from, modern women socialize each other to be better at this..."