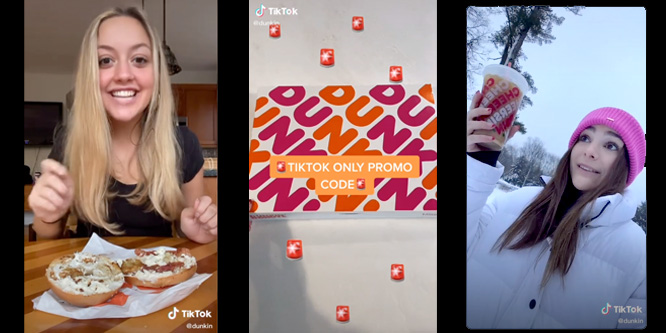 With TikTok becoming one of the most downloaded apps nationwide and worldwide, and with the U.S. emerging as the second most important market in terms of money spent on the app, U.S. retailers are starting to look for ways to leverage the short video sharing service. One of the first big names to hop on TikTok is Dunkin’.

Dunkin’ recently launched a campaign in which it asked fans to come up with “menu hacks” and post them on TikTok, according to Yahoo Finance. By “menu hack,” Dunkin’ means an off-menu item created using the ingredients available in the chain’s kitchen. Dunkin’ promised to turn the three most appealing hacks into real selections on the chain’s menu. The three winners would also receive a $100 Dunkin’ gift card and a Dunkin’ onesie. Arby’s and Kraft have also run TikTok-centered campaigns.

While these represent some of the first major retailers to leverage TikTok for marketing in the U.S., others in the retail space have been making moves to accommodate the popular app. Major e-commerce platform Shopify recently inked a deal with TikTok to let merchants easily create TikTok videos to promote their products.

TikTok has demonstrated its potential as a vital, viral marketing channel for smaller U.S. retailers already. In September, mom-and-pop candy retailer Candy Me Up was able to use TikTok as a lifeline that helped it remain afloat and build a new remote customer base during the first round of pandemic shutdowns.

The “menu hack” or “secret menu” concept has long been a popular viral phenomenon. Websites like Secret Menus and Fast Food Menu Prices are dedicated in whole or in part to highlighting off-menu options available — or at least feasible — at fast food restaurants.

Restaurant receptiveness to menu hacks can vary. Starbucks has at times embraced the concept. For instance in 2016 the chain ran a promotion in which baristas were given free reign to devise their own concoctions. However, this holiday season, while Delish details how to order a Starbucks Candy Cane Cold Brew off the secret menu, it notes that customers attempting to order the off-menu concoction by name risk looking silly to the barista.

DISCUSSION QUESTIONS: Will Dunkin’ find success with its menu hack campaign on TikTok? How should success and conversion be measured? Will TikTok videos become a part of every retailer’s social media presence?

"There has to be some “what’s in it for me” reward at the end so viewers can feel the value from watching the video."

"Creativity and making it fun for participants are critical success factors for a TikTok campaign. Turning the campaign into a contest with prizes doesn’t hurt either!"

7 Comments on "Do retailer TikTok campaigns tick the right boxes?"

In terms of exposure, TikTok is huge. However, commercial campaigns need to be tailored so that they are appropriate for the audience. Dunkin’s works because it builds on an already popular theme and is engaging and fun. There is also a reward element that encourages participation. This kind of creativity is important: people go on TikTok to be entertained and to engage, not to be sold to!

I think TikTok works but it definitely has to be tailored to the audience and spell out what you want to emphasize about your product or service. There has to be some “what’s in it for me” reward at the end so viewers can feel the value from watching the video.

For a retailer like Dunkin’ a fresh way to look at the menu can resonate on TikTok. For many retailers, however, a foray into TikTok will likely be fraught with issues.

Creativity and making it fun for participants are critical success factors for a TikTok campaign. Turning the campaign into a contest with prizes doesn’t hurt either! At the same time, it’s not about showing off a product in a traditional sense, not at all like what you might do in an Instagram campaign. Each social network has its own audience focus and retail campaigns need to adapt to each one in turn. Any campaign’s mission on TikTok will be one about exposure and raising brand awareness. Will it result in conversions? Unless your goal is to drive to an e-commerce site, it may be difficult to measure directly, but a successful campaign will generate loyalty and you should see that convert into sales.

At the surface, people may believe that TikTok is only a Gen Z or a Millennial-based social media app; however as with the early days of Facebook and Instagram, the viral app is starting to scale up and extend into other generations. With all the negativity surrounding other social media apps, TikTok is the hottest commodity on the market, and brands have started to take notice. While brands have such a great opportunity to drive engagement on TikTok, some of the best posts are authentic and not advertising. For example, Nathan Apodaca posted a video of himself on a skateboard a few months ago, with Fleetwood Mac’s Dreams in the background, while drinking Ocean Spray Cran-Raspberry. It was literally magic in a bottle for TikTok, Fleetwood Mac, and Ocean Spray! It went viral not because of the product but rather the good vibes people needed in what has been a traumatizing year. Yes Fleetwood Mac and Ocean Spray took notice, as did thousands of others who replicated the TikTok video. Bottom line, the best product… Read more »
2
|
0
-   Share

There is, at this time, no evidence anywhere that TikTok works. Yes, we are told about the cranberry deal — but it’s too early to know if all the buzz had any serious effect.

There is no need to rush madly after this shiny bauble. If it’s serious, in 2 years we’ll know WHY it’s serious and HOW to use it. At this point, no one knows either so it’s generally a waste of money to rush off after TikTok (…as we did after Vine, and Groupon, and Pokemon, and any of a thousand other shiny baubles in the past 15 years).

"There has to be some “what’s in it for me” reward at the end so viewers can feel the value from watching the video."

"Creativity and making it fun for participants are critical success factors for a TikTok campaign. Turning the campaign into a contest with prizes doesn’t hurt either!"