Do retailers get how social holiday shopping has become? 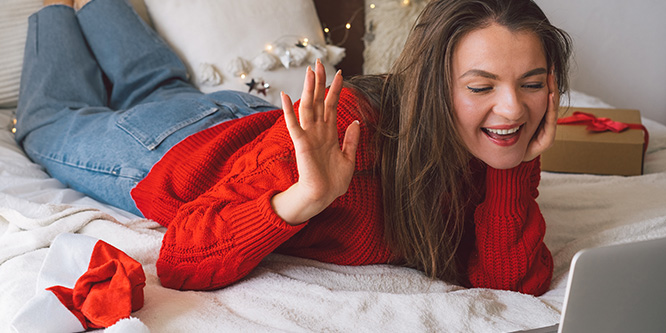 Fifty-eight percent of consumers say social media will influence their holiday buying decisions, according to McKinsey’s 2021 holiday survey. Younger consumers were found to be particularly open to social for gift-giving inspiration.

McKinsey’s survey taken in early October showed 87 percent of Gen-Z respondents expect social media to have a “significant” or “some” influence on their holiday purchases. The platform they think will influence their holiday purchasing behavior the most is YouTube, cited by 67 percent; followed by Instagram, 63 percent; and Facebook, 44 percent.

In contrast, only 25 percent of Boomer respondents (including Silent Generation members) expect social media to influence their holiday purchase decisions. Asked about influence by channel, Facebook scored highest among Boomers, at 66 percent; along with YouTube, 35 percent; and Instagram, 25 percent.

Another recent bullish report on social commerce came from Brightpearl, which found 59 percent of overall shoppers (77 percent of 18- to 24-year-olds) prefer to shop online via non-traditional channels, such as social media platforms, livestream and voice commerce, because they’re fun, sociable or easy to use. Among Gen-Z respondents, Instagram (47 percent) takes the lead as the shopping platform of choice for holiday shopping, followed by Facebook, 40 percent; Amazon Alexa, 35 percent; Pinterest, 32 percent; TikTok, 29 percent; and livestream shopping, 25 percent.

Other studies this year likewise pointed to a stronger link between social media and commerce:

DISCUSSION QUESTIONS: Are retailers and brands keeping up with the popularity of social media as a potential influencer of holiday purchases? Where do you see the biggest opportunity and challenges for retailers in tapping into social media’s product discovery?

Please practice The RetailWire Golden Rule when submitting your comments.
Braintrust
"The retailers who create the most direct and convenient path from inspiration to purchase will prevail here. "

13 Comments on "Do retailers get how social holiday shopping has become?"

Social media is part of nearly every decision now, especially shopping, as the number of channels and the hours engaging with them continues to rise. Any retailer not using this to its advantage is going to lose.

Well, they BETTER “get” it! If the aftermath of being slow on the power and magnitude of e-commerce didn’t wake you up to how important it is to move faster, being slow on social selling (including livestreaming) will be a death knell. The big question, like with advertising, is how to do it effectively and on what platform. My bet is on Instagram and TikTok.

Preaching to the choir with you Lee, but retailers also need to understand the power their brick and mortar has on influencing online sales – stores should be considered part of their media strategy too and connected back to social.

Social media will be an important channel not only to influence but also to let customers buy with one click. Meta and other tech giants will take the lead in this channel but retailers must be fast not to fall behind.

The behavior will further the divide between online and physical retail. Online retailers, particularly the savvy ones, understand these dynamics and are well-positioned. But physical-only retailers or those with limited online presence already lag on their online marketing and rely excessively on foot traffic and local mailers. And the social shopping trend will impact them most.

Or, said another way: “Do retailers get how complicated holiday shopping has become? (Yes, I am a Boomer.) Look at all the social websites I have to visit to try to divine the right presents for my (grown up) kids! Shopping for presents was never a simple task. Social media can indeed be helpful, right up to the point that it becomes impossible to process all the different options that can be tapped into. Sometimes it is OK to rely on good old-fashioned instinct — and liberal return policies.

Social media is embedded in shopping and I am guessing retailers are very much aware of that and are taking advantage of it as much as they can.

While social media and selling continues to grow and retailers certainly need to be experimenting with livestreaming and other tactics, let’s remember that consumer behavior often doesn’t change overnight. Adoption of livestreaming is significantly higher in China and, while consumers may be experimenting with social selling, data shows many are still simply going to the good old-fashioned brick-and-mortar store.

Retailers could always do more with social media, during and outside of the holidays. For a while, self-reported consumer data wasn’t giving social much credit in terms of recognizing that it was playing a big role in purchase decisions. It’s nice to see consumers now reporting the impact social has on their shopping behaviors. The retailers who create the most direct and convenient path from inspiration to purchase will prevail here.

Honestly, I’m surprised that these surveys show Instagram and Facebook are more popular than TikTok for product discovery, even for Gen Z.

Retailers and brand are oversubscribed in online social. Where they have largely failed is making physical retail a more social and shareable experience. If they can tie social dynamics to where 80 percent of transactions actually occur in-store, we will see an exponential release of incremental value.

I don’t think the discussion is or should be really about how “social” the holidays have become, as it should be about how you promote a time that has become quite fractious. You can imply and expect sociability, whether through media or in-person means, just so much if you’re not being true to the point of it all. Which is about Christmas. But that’s something many first-worlders (like me?) would like to say it’s not about. Even though if you took this precise holiday out of the equation would we be buying gifts (and getting together much) at all? Which is the other thing that this time is (and is not) about: shopping, right? So how are retailers (online or in-store) making it about something when they don’t wanna make it about—lest they offend some current and “correct” thought thinkers? As far as I can tell, it’s about shaming those that in some cases (over)decorate in favor of those that vastly underplay it. But to the point of “why bother?” Which is especially bothersome, knowing… Read more »
0
|
0
-   Share

At this stage, “keeping up” with social and digital marketing indicates you are way behind.

All data demonstrates that profitable consumers — those with the longest purchasing life — favor digital and social influences to initiate a purchase. The purchasing cycle begins at the customer’s screen, and if a retailer wants to persuade consumers to visit their store and consider purchasing, they need to engage the consumer at the beginning of the purchase funnel (customer’s screen) and stay with them all through the stages of the funnel, which is overwhelmingly digital.

“Digital first” should be the strategy of the majority of retail categories. It’s the backbone of contemporary marketing plans and it allows for innovation not possible in the past. Retailers need to provide sales associates with the tools to sell digitally beyond brick & mortar locations and allow them to become influencers in the purchase funnel.

Braintrust
"The retailers who create the most direct and convenient path from inspiration to purchase will prevail here. "