Does the Janie and Jack deal point to a new direction for Gap sans Old Navy? 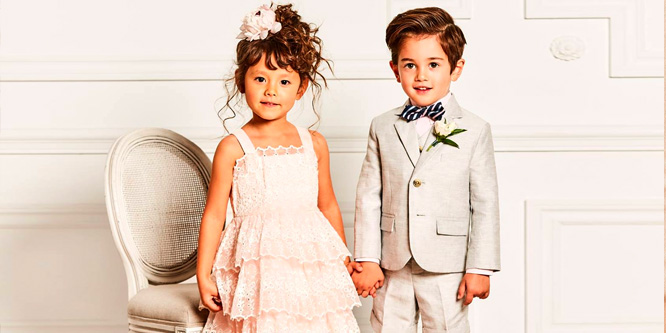 With Gap and Old Navy splitting off into two companies, the once-popular mall retailer won’t have the fast-fashion brand’s success to prop it up. As it searches for ways to stand on its own two feet, the former parent company could be pursuing a new niche in kids’ clothing — thanks to a separate apparel industry shakeup.

Gap plans to acquire Janie and Jack, a high-end children’s clothing brand formerly owned by Gymboree, for $35 million, according to The Wall Street Journal. The planned acquisition comes as part of Gymboree’s bankruptcy and still requires vetting in bankruptcy court. The Gymboree name and its Crazy 8 kids’ clothing brand are being sold to The Children’s Place, a chain that had been a direct competitor of Gymboree.

Janie and Jack has 140 standalone stores, according to reporting by Patch.

As Gap attempts to pick up Janie and Jack, it is getting rid of many of its own locations, as reported last week. Gap plans to close around 230 of its 725 stores (excluding those in China). The chain frames the closures as part of a strategic restructuring that will cull under-performing locations.

While it might be better known for the khakis and button-ups of its 1990s heyday, Gap has long had children-oriented sub-brands both in stores and in standalone locations. GapKids was introduced in the late 1980s, and babyGap was launched in 1990. Both predated the creation of Old Navy.

It remains to be seen whether moving into designer children’s clothing with Janie and Jack could be the path to the brand reinvention the chain needs. But Gap needs to do something now that it’s on its own as its earlier attempts at updating its look and feel have been notoriously unsuccessful.

In 2010, for instance, the chain tried to update its logo as part of a rebranding effort. The new logo was so widely panned that the term “Gapgate” arose to describe the situation. Years later, the situation was still being referred to as one of the worst branding failures in history on websites like Medium.

Please practice The RetailWire Golden Rule when submitting your comments.
Braintrust
"Children’s apparel is a solid niche for Gap to explore after splitting from Old Navy. "

"Given Gap’s consistent struggles to find relevance with their core customer, I guess trying to broaden their reach into kids’ fashion is worth a try."

"Overall, bringing outside brands to improve their brand position will not be the solution — just ask J.Crew."

11 Comments on "Does the Janie and Jack deal point to a new direction for Gap sans Old Navy?"

Picking up Janie and Jack provides Gap with a strong offering in the kids category – a category that has become slightly less competitive with the demise of Gymboree. However, the question remains, is this the right strategy for Gap? The acquisition of Janie and Jack is telling of Gap’s strategy, and while it’s an interesting move, it’s unclear how much impact this will have on the Gap’s business in general – this is very much a work-in-progress, and success is far from certain.

Children’s apparel is a solid niche for Gap to explore after splitting from Old Navy. It is a sign that Gap intends to solidify its footprint in this space, although it faces plenty of competition and a tough road ahead.

I think Gap is in a state of flux and not sure which direction they should go. It’s easy to buy another brand when you have the capital but how that brand will fit with yours is a different story. Gap had a nice run with many years of success, but apparel is a fast-paced business one that not only changes quickly but one with the uncertainty of how the public will respond. Gap lost its edge years ago and has not been successful in turning itself around. Closing stores is wise because they don’t need the extra expense if the traffic and sales aren’t there. However, Gap seriously needs to get in touch with its core customer and find out what customers like and don’t like. Then they need to focus hard and heavy to see what will make them different as a brand and pick a direction that makes sense. Create the right marketing campaign and spend time and money with a commitment to make it work. This type of plan doesn’t happen… Read more »
0
|
0
-   Share

Given Gap’s consistent struggles to find relevance with their core customer, I guess trying to broaden their reach into kids’ fashion is worth a try. The price for Janie and Jack seems right and, in my opinion, the appeal of GapKids and babyGap has been stronger than that of “adult” Gap. Maybe they are on to something…

I have long thought that GapKids was much better merchandised than Gap. They offer fun, well-assorted product. So it makes sense to build on that strength. How will they differentiate the two businesses? Remains to be seen. And $35 million for 140 standalone stores seems like a bargain. Extending the kids business is not the big strategic issue facing Gap. I keep reading about the 200+ underperforming stores they will close. While I am sure they do indeed have stores worthy of closing, underperforming stores is not Gap’s problem. Gap’s problem is underperforming product. Boring, ordinary product. Gap actually succeeded beautifully with ordinary product at one point. They succeeded with brilliant marketing. Gap has what I call a “15 percent problem.” Much of Gap’s product is good product. If they would just step out a little on 15 percent of their assortments, they could be telling a much more interesting story. They need a little less predictability in their assortments. They need a little higher dosage of “fun” and “treasure hunt” product, especially in men’s.
2
|
0
-   Share

Janie and Jack seems like a sensible addition that will give Gap a presence in part of the kids’ apparel market that it doesn’t already occupy. However, acquiring things is not really the solution to Gap’s problems. It needs to develop a much clearer and a more compelling proposition within its own business if it is to drive growth.

The house is on fire and you go on a spending spree for old Gymboree stores and buy a new brand? Oh yes and cleave the company into an unnamed company. It’s a new direction but you can’t buy your way out of the fundamental problem – the CEO doesn’t know how to manage the brands he has had for a generation.

It’s a good step in delineating differences between Gap and Old Navy children’s products. But overall, bringing outside brands to improve their brand position will not be the solution — just ask J.Crew.

I agree with Bob’s comments. Seems strange to go on a buying spree with the problems already in-house. But looking at it from a different viewpoint; if they continue to stand firm where they are — they are moving backwards. They have to do something. This something makes sense. It is up to them to make it rebuild their brand.

The kids clothing segment has always represented a big area of opportunity for retailers. Gap has an already well established babyGap brand, that has a loyal following which perhaps could use a strategy refresh in a competitive market. However, via this acquisition, the babyGap now has a chance to revisit their merchandising strategies, diversify their assortments, and enable a “good-better-best” approach to their pricing structure.

As with any acquisition, it remains very much a wait and see proposition.

It’s a quandary: done well, it could be a brand expansion; done poorly, (yet) another distraction from turning around the core business. Given that this is an upscale children’s brand — closest, I would think, to either GAP Kids or Banana Republic — I think I would feel it was more of the former than the latter if it wasn’t the other division (Old Navy) that they seemed to be emphasizing.

Braintrust
"Children’s apparel is a solid niche for Gap to explore after splitting from Old Navy. "

"Given Gap’s consistent struggles to find relevance with their core customer, I guess trying to broaden their reach into kids’ fashion is worth a try."

"Overall, bringing outside brands to improve their brand position will not be the solution — just ask J.Crew."