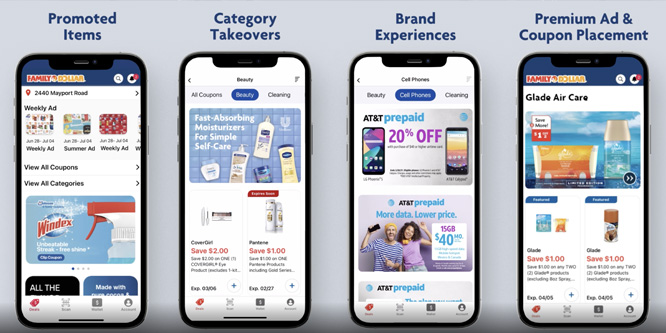 Family Dollar has become the first dollar store to launch an ad network to support placements across its mobile app and FamilyDollar.com. The move puts the dollar store chain in a line of other retailers trying to mimic Amazon.com’s ad sales success.

“Brands will be able to directly reach millions of families across America through a variety of digital options,” said Richard McNeely, chief merchandising officer at Dollar Tree, the parent of Family Dollar, in a statement.

Family Dollar joins Walmart, Target, Home Depot, Instacart, Kroger, CVS and Walgreens in starting or ramping up their sell-side advertising in recent years as Amazon builds on its position as the third largest online ad platform.

Last year, Amazon’s share of the U.S. digital ad market grew to 10.3 percent from 7.8 percent in 2019, according to eMarketer. Amazon is particularly gaining share on Google, which had a 28.9 percent share compared to Facebook’s 25.2 percent. Amazon’s share is expected to reach 11.9 percent by 2022 as trade spending and shopper marketing follow the general consumer shift to e-commerce, and will be aided as well by its investments in NFL-broadcast rights and its ad-supported video properties.

A recent Digiday article said that, despite the glut of newer retail media inventory, budgets continue to prioritize Amazon and Walmart because they have become trusted platforms.

A report from Criteo, an ad firm specializing in online retargeting, however, posits that brands are seeking out alternatives. “Now may be the time for brands to take advantage of lower prices and better placements with other retail partners where the competition is less stiff,” according to the report.

DISCUSSION QUESTIONS: Do you see demand growing for specialized ad platforms, such as Family Dollar’s, or is there only room for a small number of key players in this market? Do you see the marketing dollars going to retail media shifting CPG messaging from brand building to sales promotion?

Please practice The RetailWire Golden Rule when submitting your comments.
Braintrust
"This shows how retailers are finding new business models in offering services on the supply side as well as the consumer side of their business."

"Yes, I see these platforms growing as Point of Search becomes the de facto starting point for more and more consumers in their digital purchase journey."

With the pace at which retail-owned media business adoption is growing, CPG companies will soon realize that they have tons of duplicate data of the same consumer gathered from multiple retailers.

From my RetailWire article yesterday, the retailer-as-service (and retailer-as-platform) movement marches on as more retailers see suppliers (and employees) as profit centers. This has always been the case on the supplier side, yet the “opportunities” have moved to the digital space and promise to be far more lucrative than old-school slotting fees, co-op monies and markdown penalties, if only because the tools are far more sophisticated. In this case, the digital aspect makes dollar stores, and other discounters, viable platform players that can monetize data while escaping the perception of playing pricing games with consumers (verboten under these business models). The question is, will retailers show favor to brand marketers that partake and have less regard for those who don’t (or can’t)? I see yet another brand shakeup on the horizon.

E-commerce and value shopping have soared, inviting intense rivalry in the value tier. Now retailers are merging their media and merchandising to stay competitive. Retailers and brands can benefit from personalized marketing by influencing consumers at the very moment they’re shopping.

We’ll see a mix of brand building through promotions, as consumers now expect deals and discounts. The dollar channel is an ideal arena to demonstrate value for money. Digital promotions can help retailers and brands stand out, sell more and earn top-of-mind (and screen) status.

This shows how retailers are finding new business models in offering services on the supply side as well as the consumer side of their business. Not every retailer will have the audience scale and reach necessary to make this attractive to manufacturers, but we can expect national grocers to follow Amazon, Walmart, Target, Home Depot, Kroger, etc. CPGs and other manufacturers will be looking to boost their own staff with the skills necessary to aggregate the analytics they’ll be receiving from each retailer to form their own picture of how this new digital ad spend is performing. Will this move more ad dollars to sales promotion vs. brand building? Perhaps, but I suspect many brands will use these retailer media networks to do both.

Retailers’ first-party data becomes ever more valuable as new cookie and privacy standards erode traditional data providers – and Family Dollar is capitalizing. They have extraordinary scale, but margins are tighter. Amazon will continue to dominate as scale and competition is key to getting larger contracts, but Family Dollar will get their share.

Another ad platform isn’t cause for celebration from anyone’s perspective. There will be massive redundancy across items and consumers will learn to tune them out. Better to find a less well-traveled medium and focus on that.

Yes, I see demand growing for specialized ad platforms such as Family Dollar’s. Many retailers have traffic they can monetize, why wouldn’t they?

The next phase for retailers is to do it better and be more relevant. I skip dozens of irrelevant Youtube ads a week. If a retailer I already shop sends me relevant content, it would seem my likelihood of clicking or at least reading it would be higher.

I think marketers will create the allocation that works best for them, likely both brand building and sales promotion.

Yes, I see these platforms growing as Point of Search becomes the de facto starting point for more and more consumers in their digital purchase journey. With 14 million and growing consumers in the Family Dollar chain, I see that it can be an appealing marketing medium for many brands. As all of these come on board, CPGs will likely do many trials in 2021 to see the payout across each of these ad networks and adjust strategies based on performance across goals of customer acquisition, awareness, new product launches, sales promotion, etc. It will be interesting to see if these retailer ad networks start to pull share away from the larger tech companies.

Braintrust
"This shows how retailers are finding new business models in offering services on the supply side as well as the consumer side of their business."

"Yes, I see these platforms growing as Point of Search becomes the de facto starting point for more and more consumers in their digital purchase journey."