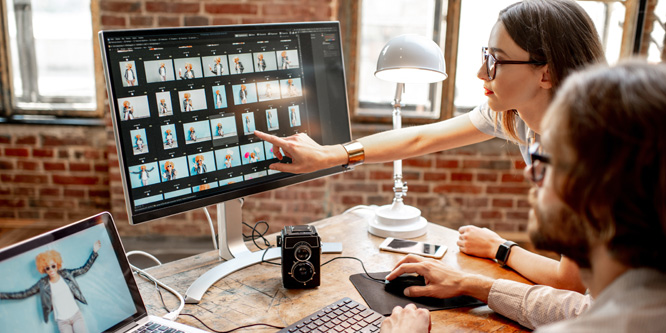 Move over Amazon.com and Walmart — Target wants a bigger piece of the retail advertising pie.

In early May, Target rebranded its in-house media agency, formerly known as Target Media Network, as Roundel — a play on its bullseye icon — to signify that the retailer’s advertising solutions extend well beyond the target.com platform to include traditional television and magazines.

“Roundel, for us, marks this conscious pivot from what we were known as before, which was really more in the shopper marketing space, to now pivoting to being one of the more innovative media solutions for the marketplace in an era where customers [and] clients believe there has got to be a better way to show proof of business performance from the different media partners that they’re working with,” said Kristi Argyilan, president of Roundel, at NewFronts, the digital ad buying event, according to Adweek.

Target’s in-house media company, launched in 2016, has already worked with nearly 1,000 partners including CPG brands as well as Allstate, Disney and Mastercard.

Tapping Target’s own first-party data and other sources, Roundel will develop ads for clients and place them on the retailer’s websites, social channels and video channels as well as third-party sites from companies including Hearst, Meredith, NBC Universal and Pop Sugar.

Roundel partnered last year with MarsWrigley on holiday-themed creative covering various occasions, including gifting, dish candy and stocking stuffers. Ms. Argyilan wrote in a blog entry, “We pinpointed the best channels — in this case, online, mobile and social — and delivered the ads to relevant Target guests. We followed with robust reporting that measured the campaign’s success — including thousands of dollars in savings for our guests and an impressive double-digit sales lift.”

Walmart brought its ad sales force in-house earlier this year and acquired digital advertising start-up Polymorph Labs to jumpstart its ad business. Both Target and Walmart are trying to catch up to Amazon, the third biggest seller of online ad space behind Google and Facebook. Kroger and other grocers are also investing in sell-side advertising.

DISCUSSION QUESTIONS: Will owning advertising businesses become a major competitive advantage for large retailers such as Amazon, Target and Walmart? Comparatively, how appealing will grocers, dollar stores and retailers in other channels be to advertisers?

Please practice The RetailWire Golden Rule when submitting your comments.
Braintrust
"As performance marketing on the Facebook/Google oligopoly gets increasingly expensive, brands should be welcoming the competition brought by Amazon, Walmart and Target."

"As advertising revenues continue to show strong growth, a new level of stickiness is unlocked for brands looking to gain share on various platforms."

"The short answer is yes — retailers, large and small, will own/become advertising channels. The store is a medium..."

As performance marketing on the Facebook/Google oligopoly gets increasingly expensive, brands should be welcoming the competition brought by Amazon, Walmart and Target.
These platforms offer something unique – targeting capabilities based on real shopper behavior data. Something that Google and Facebook can’t compete with.

The competition that Target will bring to established players should be welcomed. At the same time, brands now have more options that ever for their performance marketing and media. Each platform also wants to maintain a walled garden. So some benefits in cost efficiency may be dampened by the complexity of dealing with and measuring results from several retailer ad platforms.

Target’s creation of Roundel is the latest validation that retailers are no longer just places that sell stuff, they are evolving into multi-faceted platforms. Target is making a move to monetize its platform but considering its history of groovy marketing and bent toward ownership, it’s surprisingly late to the party. Regardless, Target will benefit mightily from the partnerships it forges, collecting ad dollars and data. The benefits of doing business with Target will extend far beyond shelf placement (physical and digital). Many more eyeballs across many more touch points.

This is a natural progression for retailers, because of how Amazon has changed the retail business as well as the advertising business. The traditional advertising business has seemed to lose its way and continues to try to figure out exactly how it fits in to this new reality.

The amount of shopper data that Target, Walmart and Amazon have make advertising a natural next step and a great way to leverage that asset. And with Google and Facebook dominating the digital advertising market more competition is needed to both encourage innovation in advertising and to keep pricing competitive.

A direct connection between ad spending and results is the Holy Grail for advertisers. With a clear line of sight from ad spend to purchase in-store, retailers like Target can deliver this like no other advertising “walled gardens” (e.g. Facebook, Google, even Amazon).

The short answer is yes — retailers, large and small, will own/become advertising channels. The store is a medium and as such the store and its audience will continually be monetized. Why stop at products and services when you can further monetize your shoppers during their journey? This raises further questions. Who owns the shopper in a store; the retailer or the brands that are sold there? Also at what point does incessant advertising drive the shopper out of your store — be it physical or online?

I have long maintained that there is a pragmatic way to bring value to all constituents — retailers, brand advertisers, and shoppers — if in-store advertising, marketing and merchandising are balanced and done correctly.

Anything that attracts a monetizable audience is a great promotional channel. Consider how much retailers spend to create and continuously improve their online properties and this is a great idea to capture more value. Hopefully CPG brands realize the opportunity to fold this activity into trade promotion and shopper marketing plans.

The shift into advertising is lucrative and presents retailers with a much needed incremental revenue stream. However, it should always be the cherry on top of the cake and not the cake itself. If retailers fail at the core business then the advertising model unravels as the insights and reach that they can provide starts to weaken.

In Target’s case, advertising is most definitely the cherry. The core business is strong and growing. Target also has very strong exposure to lucrative groups such as young families and Millennials. This should make advertising a very successful add-on to Target’s retail operations.

This is a critical evolutionary move and will help drive personalization to a whole new level.

Competition is always welcome and, considering the monopolistic hold by Google and Facebook, this will benefit many. The moves by Amazon, Walmart and Target are outstanding moves to vertically integrate the advertising strategies in-house and drive more optimized personalization strategies.

The keys for Amazon, Walmart, Target and potentially other retailers are to drive consumer engagement and leverage all the valuable insights into driving improved customer experiences. These companies will now have a more efficient way to track consumer behaviors across channels and determine how digital, email, physical and social media advertising channels are actually leading to increased conversions, profitability, and full priced sales.

I’d like to weigh in on another layer of this excellent conversational thread — and that is properly weaving the analytic opportunity of this retail media idea into the store. We are staunch believers that media in physical spaces must measure behavior, emotion and transaction. If you think about it, most all other media platforms already do. The dance between retail store brands and CPGs has always been “careful” because a brand’s attribution models are tight and cogent until the hit the brick and mortar stores. Then, if they are lucky, they can pull transaction — but nothing else. I worked at the largest ad agency in the world for years, and their analytic team (which was world class) struggled mightily with this. Net-net: Media is marketing. All marketing is quickly becoming digital — even the physical stuff is digital if data is fueling the what, where and how. Advertising as a form of marketing is a nuisance until it has personal meaning — then it is a welcome suggestion. We have to therefore move… Read more »
0
|
0
-   Share

As advertising revenues continue to show strong growth, a new level of stickiness is unlocked for brands looking to gain share on various platforms. Grocers have had in-store advertisements/merchandising for years and implementing digital solutions will give large brands more measurable metrics to develop budgeting that supports metric-driven marketing.

Braintrust
"As performance marketing on the Facebook/Google oligopoly gets increasingly expensive, brands should be welcoming the competition brought by Amazon, Walmart and Target."

"As advertising revenues continue to show strong growth, a new level of stickiness is unlocked for brands looking to gain share on various platforms."

"The short answer is yes — retailers, large and small, will own/become advertising channels. The store is a medium..."