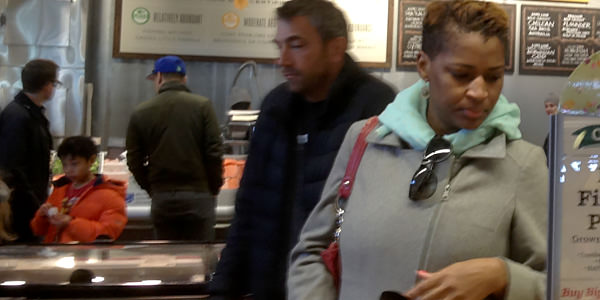 Minority consumers have long complained about being treated unfairly in stores, using the phrase "guilty of shopping while black" to describe the situation. In recent years, some have filed and settled high profile suits with retailers after alleging racial profiling. Now, four former CVS employees have filed suit charging the chain with racial profiling and for terminating their employment after they complained about the practice.

According to the suit, two loss prevention supervisors instructed the four workers to pay attention to black and Hispanic shoppers to catch more shoplifters.

"While there have been many high-profile shop-and-frisk cases filed by customers of large retailers in recent years," David E. Gottlieb, a lawyer for the plaintiffs, told The New York Times, "this is the first time a group of employees has banded together to provide an inside account and expose the blatant racial profiling policy at one of the largest retailers in the world."

Carolyn Castel, a spokesperson for CVS, wrote in an email to The Associated Press, "CVS Health has firm nondiscrimination policies that it rigorously enforces. We serve all communities and we do not tolerate any policy or practice that discriminates against any group."

A study by researchers from Villanova, "Shopping While Nonwhite: Racial Discrimination among Minority Consumers," published last December in the Journal of Consumer Affairs found that on a scale of one (never) to five (always), black consumers averaged 3.15 in reporting unfair treatment in stores because of their ethnicity. Among white consumers, the number was 1.86.

One of the challenges with identifying racial discrimination is that it can oftentimes be subtle.

"We have a hard time recognizing these experiences that other people have because we don’t notice them," Aronté Bennett, one of the Villanova researchers told Quartz. "Many consumers, minority and otherwise, don’t think that minorities are experiencing discrimination as a whole."

How is it that accusations of racial profiling in retail continue to pop up despite company rules against discrimination? Are retailers adequately addressing the issue of racial relations in their training programs whether in loss prevention or elsewhere?

Please practice The RetailWire Golden Rule when submitting your comments.
Braintrust
"General comment: It is telling that the supervisors told the staff to watch minorities in order to catch more shoplifters rather than telling them to focus on preventing shoplifting. I wonder if they, and their staffs, are measured, and perhaps rewarded, by how many shoplifters they catch rather than if the store has a lower shrink."

"Hey, discrimination definitely happens. And while I know nothing about this case, I also know that accusers are not always truthful. Just sayin’."

General comment: It is telling that the supervisors told the staff to watch minorities in order to catch more shoplifters rather than telling them to focus on preventing shoplifting. I wonder if they, and their staffs, are measured, and perhaps rewarded, by how many shoplifters they catch rather than if the store has a lower shrink.

If all staff members followed company policies then we would have far fewer instances where the wrong things were being done at retail. Employees are people and as such bring their own biases and beliefs to work with them.

Hopefully all companies have non-discrimination polices in place and train their employees to treat everyone equally and someday we will not be writing comments about stories like this one.

Before everybody piles on, it’s hard to believe that an instructor would advise profiling blacks and Hispanics in this day and age of litigation-at-the-drop-of-a-hat. But maybe it happened. And maybe it didn’t. Hey, discrimination definitely happens. And while I know nothing about this case, I also know that accusers are not always truthful. Just sayin’.

First of all, their is no justifiable reason to pursue the issue of shrinkage based on racial profiling. Management teams have to hire and train their store manager groups on this line of thinking first and foremost — don’t just write it in an employee handbook. Talk through the issue in weekly meetings with the store managers. Loss prevention has to be a topic of training in retail operations. That extends to all levels. Employees have to be given the information about how shrink impacts everyone — loss of hours, disruption of store operations, concern about safety, loss of revenue and profitability, impact on other customers who may experience or see the issue, etc. Concrete examples of how thieves go about their activities have to be discussed. What employees need to do should they encounter an act of theft is to contact security first. An associate should not approach the thief if the associate is not clear on how to handle the situation. Stores have to be positioned to defend their right to run a smooth operation.… Read more »
0
|
0
-   Share

If you have worked in a retail store long enough you start to know your customers and their behavior like an avid sports fan knows all the players on all the teams. People in loss prevention have an unlimited number of tools at their disposal. A retailer can do things to control theft but they cannot control the demographics of the thieves. Everyone is profiled based on their propensity to shoplift with statistical data to back it up. Those monitoring security cameras are professionals and are not going to waste time profiling those in their professional opinion do not have a propensity to steal. It’s not always fair. Sounds to me that these employees are just trying to game the system and litigate their way ahead rather than being a team player. All of us who fly know all about being profiled. Unless you are elderly, a child, or have a TSA Global Entry card, you are profiled as a possible terrorist. Bottom line is, if you are not stealing and are not guilty, you… Read more »
0
|
0
-   Share

I am not a minority yet, but will be. I am a store wanderer and I know I have been watched by well-trained loss prevention professionals. I am so addicted to retail I can pick out loss prevention people on the floor after about 15 minutes and I let them know all is fine with me.

For this usual discrimination issue — as long as we are a free country and have any form of minorities there will always be issues with discrimination.

Someone get the facts — how many of what race in what regions are caught shoplifting? Let the facts decide who to watch and on what days. Some days of the month are hotter for lifters.

Big data and video analytics should solve this. It’s hard to argue with the numbers as the sample size grows.

When you are in the business of catching shoplifters and your income is commission-based, you will learn very quickly where to cast your fishing line in order to catch the most fish. As DJL points out, you will learn who the players are. This applies to other countries as well particularly where nearly all are the same race. There are still subtle ways to profile suspected criminals. If fact if we did not profile we would catch much fewer criminals. All of us discriminate because our brains have a way to trigger primal fear, despite our good intentions of fairness. Next time you are in a big diverse crowd, ask yourself if you were forced to leave your small child with a stranger, which stranger would you choose? You will find yourself discriminating very quickly. Your primal instincts kick in based on everything you have experienced in the past. Company rules, handbooks and training programs are all well-meaning but they do not overrule human instincts. My experience has been when hiring loss prevention managers, I… Read more »
0
|
0
-   Share

It does not take long to know who the loss prevention people are and if you are being watched. Sometimes they are subtle. But if their income is based on “catches” then they are going to be on the floor “catching.” There is nothing subtle about that. They know who to look for, and the best time to find them in the stores. Just like fishing. You go when they are going to be biting.

Braintrust
"General comment: It is telling that the supervisors told the staff to watch minorities in order to catch more shoplifters rather than telling them to focus on preventing shoplifting. I wonder if they, and their staffs, are measured, and perhaps rewarded, by how many shoplifters they catch rather than if the store has a lower shrink."

"Hey, discrimination definitely happens. And while I know nothing about this case, I also know that accusers are not always truthful. Just sayin’."