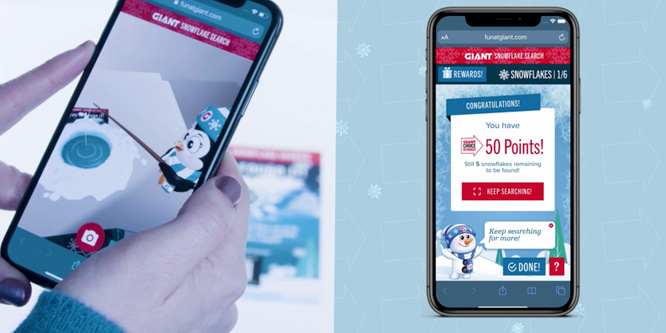 To play, customers scan a QR code on special in-store signage with their smartphones. An audio introduction by a snowman directs users to search for six unique snowflake signs throughout the store. Each snowflake triggers an interactive character on the phone, like a polar bear juggling clementines and bananas in the fruit section. Customers track the characters and receive clues to find the remaining ones.

Members of Giant Choice Rewards earn 50 points for each character found, with the ability to earn a total of up to 300 points each time they play. Under the rewards program, 300 points can be redeemed for $3.00 in savings.

Rewards members can redeem up to 1,500 points with a limit of five games until the promotion ends January 30. The game will be featured in 15 Harrisburg, PA-area stores.

Giant said that, while other retailers are using AR to provide product information, Snowflake Search is designed to “add fun to an everyday task” and occupy kids’ attention. Giant believes it’s the first US grocery retailer to use AR in this capacity.

The popularity of Pokémon GO and Snapchat’s AR lenses has not brought AR-gamification to retail as fast as some predicted, but some other examples include:

DISCUSSION QUESTIONS: Will AR-driven, in-store scavenger hunts drive more engagement or disruption at the store level? Has your opinion of the potential of AR-gamification at retail improved or worsened since Pokémon GO became a global phenomenon in 2016?

Please practice The RetailWire Golden Rule when submitting your comments.
Braintrust
"Anything that makes it a little easier for parents to keep kids entertained while shopping is definitely a plus."

"Giant is trying to utilize the game as a way to draw more attention to the Giant Choice Rewards program and drive downloads of its app. "

"I’m not so convinced that AR-gamification at retail is there yet."

I first saw this technology about eight years ago at a trade show. I thought, what a cool idea! Play a game, get details on an item, get a recipe and take advantage of electronic coupons. I know Pokémon Go was the rage some years ago, but I do not know how long the adoption learning curve will be for the mainstream public as they accept the new technology.

I’m in the holiday spirit! Giant’s holiday AR program conjures visions of sugar plum fairies and little children running unattended through the store. Wait, children running through stores looking at mobile phones does not sound like a recipe for retail success…

Really?! Kids running through the stores looking for signs! What are they possibly thinking?

Adding fun and entertainment to the grocery shopping experience is a good way to encourage customer loyalty. And anything that makes it a little easier for parents to keep kids entertained while shopping is definitely a plus. It is interesting that the Pokemon Go phenomenon has not translated to retail as much as many predicted, but Giant is targeting the same demographic as Pokemon Go which should prove to be successful for the grocer.

While giving kids a game to play while in the store is fun for the kids, I don’t see this game driving new traffic to Giant stores. So the question then becomes, what is the real business value of the game to justify the development and deployment investments, plus the (not insignificant) discounts for the parents? The article does not indicate how the adventure benefits Giant beyond encouraging shoppers to travel throughout the entire store. Are the game rewards targeted and personalized, and thus designed to encourage shopping behaviors that increase average transaction size or transaction margins? Without those meaningful business benefits in return for the investment in the game, I am not convinced this will be a winning project.

Agreed Dave that there is no way that this promotion is driving new traffic to their stores. The most likely strategy I see is that Giant is trying to utilize the game as a way to draw more attention to the Giant Choice Rewards program and drive downloads of its app. How successful it is at achieving those things is tbd. Hopefully Giant has a roadmap for next steps to actually capitalize long term on any increased awareness they are able to capture.

Don’t we already see enough problems with kids running around a crowded store with parents just ignoring them? Now we are going to give them permission?

Grocers are feeling the pressure since shoppers have forgone full shops. Sure, they’re dropping in to pick up whatever ingredient they’re missing for dinner tonight, but relying on Amazon (or Walmart) for staples. This is seems like an attempt to get them to move, with intention, throughout the store and buy more. Will the strategy actually increase sales? Will this draw shoppers in who’d otherwise shop elsewhere? Will it enhance existing shoppers’ experience? I’m not so convinced that AR-gamification at retail is there yet.

Well intentioned, perhaps, but … encouraging tykes to roam the store, presumably unattended, is contrary to both good store management and good parenting. We earlier had here on RW a grocer — can’t recall the name — that had an ersatz playground, and while that raised oversight concerns, at least it didn’t seem to disrupt the shopping experience.

Nice idea especially with the rewards, but the implementation opens some concerns. If kids are supposed to scavenger hunt without parents, I think there’s an issue. If they’re supposed to stay with parents and nag them to run them through the store to find every QR, that’s burdensome. If parents are supposed to put their kids to work to earn three bucks, there won’t be much incentive for non-Giant customers to try the stores.

Kudos for the initiative, but this effort needs iteration ASAP.

Let’s be serious. This sounds like an excuse for parents who can’t or won’t control their children in grocery stores. How about an app to improve parenting skills?

Braintrust
"Anything that makes it a little easier for parents to keep kids entertained while shopping is definitely a plus."

"Giant is trying to utilize the game as a way to draw more attention to the Giant Choice Rewards program and drive downloads of its app. "

"I’m not so convinced that AR-gamification at retail is there yet."